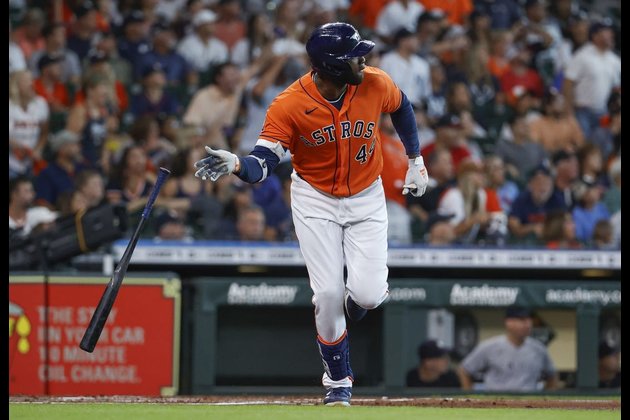 Yordan Alvarez homered and drove in three runs as the host Houston Astros held on for a 7-5 victory over the New York Yankees Thursday night to complete a sweep of a day-night doubleheader.

Alvarez was activated from the injured list before the doubleheader after a brief absence due to an injured right hand. He did not start the opener but was intentionally walked as a pinch hitter in the ninth inning when the Astros opened the third doubleheader in history of their current ballpark with a 3-2 victory.

In the nightcap, Alvarez hit his 27th home run three batters in against New York’s Domingo German (0-1) and added a two-run double.

Alex Bregman also homered and hit an RBI single as the Astros won five of seven meetings in the season series with the Yankees. Houston never trailed in any of the games until allowing game-ending hits to Aaron Judge June 23 and 26 in New York.

Chas McCormick contributed a two-run homer as Houston also improved to 25-9 in its past 34 contests.

Gleyber Torres hit a two-run homer and Judge hit a three-run shot in the ninth, but the Yankees lost for the seventh time in 10 games and dropped their fourth straight road contest.

Brandon Bielak followed Garcia with 3 1/3 innings. The Astros tried to get Bielak through four innings but he was lifted after Judge hit his major league-leading 34th homer on a shot that traveled well over the left field seats.

Rafael Montero got Matt Carpenter to hit into a game-ending double play and converted his seventh save in eight opportunities.

German returned from a right shoulder injury and allowed five runs on six hits in three innings in his season debut.

In the first inning, Alvarez made it 1-0 when he homered into the Crawford boxes in left, and Bregman lifted an 0-2 sinker into those seats to double the score. Alvarez’s two-run double off the middle of the fence in left-center made it 4-0 in the second and Bregman followed by singling to center field for a five-run lead.

Torres homered into the left field seats in the third, but McCormick connected off J.P. Sears in the sixth for a 7-2 lead.