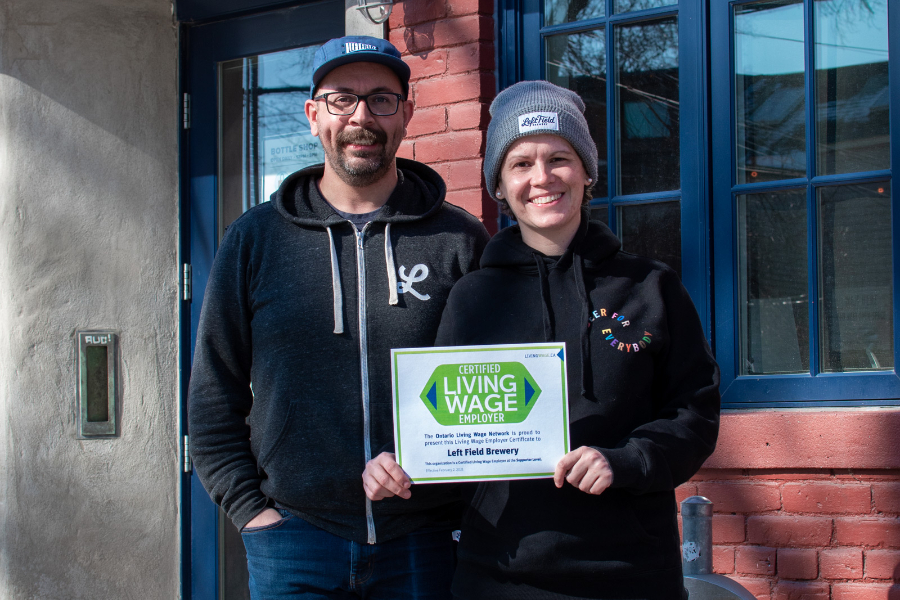 The minimum wage in Ontario went up to $15 on January 1, but some Toronto employers are looking at a different metric: the living wage.

The Ontario Living Wage Network (OLWN) calculates the cost of living for 29 regions across the province. They take into account basic expenses like housing, food, transportation, childcare, government taxes, internet and phone access and also inflation. Every year, during Living Wage Week in November, they adjust their calculations and announce a new hourly number.

As a one-size-fits-all number, it’s not a perfect calculation. It is an average number calculated for a family with two working adults and two children. But as a real-time calculation that factors in real-world and region-specific data, it’s a lot less arbitrary than the provincial minimum wage.

“Whenever the minimum wage goes up, you hear businesses complaining: it’s so sudden, they aren’t ready, it’s not the right time, it’s unpredictable, where does it come from?” says OLWN’s Craig Pickthorne. “My answer is, come over to us. We show our work.”

Pickthorne says the living wage directory has grown quickly since the beginning of the pandemic; about half of the Toronto employers have signed up since 2021.

“The pandemic has put conversations about the value of work and the value of a good job into the public consciousness,” he says. “People are more cognizant of the value of workers, and they’re seeking out employers that don’t just see labour as a cost to control but as people who are important contributors to their success.”

The OLWN alone won’t solve the issues affecting workers across the city and the province, which is why worker and union-led labour rights movements are so crucial and why they’re growing during the pandemic.

Certification with OLWN is voluntary, and there’s a fee. It tends to attract smaller and progressive-minded employers. Bigger companies are more likely to pay the minimum wage and skirt around important labour standards. But Pickthorne hopes to scale up and start signing up some of those larger employers. They’re starting with the public sector, aiming to get cities like Hamilton certified as living wage employers. There’s still a long way to go.

Here are three Toronto employers in the OLWN network on why they pay a living wage instead of a minimum wage.

If there’s one type of business that’s very well-represented in the living wage directory, it’s craft breweries. Since Muskoka Brewery became the first certified living wage brewery in Canada, many others throughout the province have followed suit, officially or unofficially.

Becoming a living wage employer was a long-term goal of the brewery, says co-founder Mandie Murphy. Wages are one of their biggest expenses but the pandemic showed how important the people working at Left Field are to its success.

“There was so much talk of frontline and essential workers and fairness in pages. A lot of places were instituting pandemic pay,” she recalls. “It was a turning point for us. It became clear to us, so many people working at the brewery were essential workers – they can’t exactly do their job from home. We’re a community-minded brewery, and paying our people a living wage just felt like the right thing to do.”

The moral case and business case are aligned when it comes to liveable wages. Providing a living wage and good working conditions – everyone also has access to health and benefits packages, for instance – means higher worker retention rates.

If workers are happy and well-employed, they’re less likely to look for work elsewhere, which means the business saves money on recruiting new talent and training them. That’s important in a specialized trade like brewing, but also in the bar and restaurant industry which is suffering from a labour shortage largely due to poor rates and poor working conditions.

“We haven’t had to do a lot of hiring as a result,” Murphy says. “And when we do, you can see [the effect of living wages] in the number and quality of applicants.”

There are a handful of bars and restaurants at the OLWN directory, like Grape Witches, that pay at least a living wage to all workers, but many spots rely on tipping to make up for lower wages. The wage structure may change now that the subminimum wage for servers has been eliminated, but it’s still common practice to use tips as a way to justify lower payroll.

“Some restaurants come to us and ask about getting certified even though they don’t pay a living wage,” says Pickthorne. “They say workers are earning more than the living wage when you account for gratuities. But that’s not money they’re paying their workers. We only certify employers, not certifiers and customers together.”

At Left Field, everyone earns at least $22.08 regardless of their job. Prices reflect those costs and there is signage up in the taproom letting customers know tipping is not required. Tips are still accepted if customers want to offer them anyway, and that money is split equally by all workers except management.

“Whether you’re a delivery driver, production assistant, a front-of-house worker at the taproom, if you’re working an event at a farmer’s market or filling boxes on a canning line, you share in the tip pool,” says Murphy.

There are craft breweries throughout the province, often acting as community hubs.

“If they all pay a living wage, that could have a really positive impact,” she says.

The Drop is a zero-carbon, zero-emissions delivery service and distribution network focused around sustainability, safety and local business. This past December, after researching costs of living in Toronto, they became a certified living wage employer – a rarity in the industry.

“The majority of people working deliveries, if they’re not with the majors – UPS, Canada Post, DHL, Purolator – they’re very likely to be contractors,” says founder Darryl Brown, who co-owns the Drop with his wife Lisa Brown. “So if they’re working for Uber, Lyft, DoorDash, they’re typically gig economy workers, which means they don’t have a stable or predictable work environment. That’s not a model I believe in.”

Gig work is rife with misclassification, which keeps workers from vital job protections, transparent pay, recourse or the ability to unionize. There’s currently proposed legislation to create a new labour category for gig workers that would give them to access certain health benefits but not recognition as employees of the companies they work for – which allows the continuation of unstable work and poor working conditions.

The Drop only has five employees but all are fully recognized employees who receive T4s, benefits, regular biweekly payments and wages of at least $25 per hour.

Brown says they’re able to do that in part because of their resistance to the “Amazonification” of delivery in which people expect super-fast same-day, sometimes practically same-hour, delivery – often at the expense of labour, safety and the environment.

Instead, all deliveries are consolidated and routed for efficiency – scheduling all deliveries to a certain neighbourhood on the same day, for instance, and not clogging up streets by driving back and forth to make each delivery on-demand. Their partners are all eco-conscious brands, too, and understand delivery is a service reliant on workers, not a taken-for-granted utility.

“If we respect the environment, we should respect people too,” says Brown. “The less they’re stressed, the safer they’ll be, the more they’ll understand the roads, the neighbourhoods. And they’ll be happier and more comfortable.”

Art Metropole has spent nearly 50 years as one of Toronto’s pre-eminent artist-run centres. They’ve been a living wage employer since June of 2021.

That’s not common for arts, culture and non-profit workers, who tend to face precarious conditions, lack of security and below-average wages.

“There’s this expectation in the arts that it should be a labour of love,” says executive director Jonathan Middleton. “The problem is you can’t eat that.”

Middleton became ED in 2019, which was a period of adjustment and restructuring for Art Metropole. They had left their space and set up shop at the MOCA, and there was a considerable amount of staff turnover. Shop staff at the MOCA made $16 an hour. Now that they’ve got their own new space on College, everyone across the organization makes at least $22.08.

Historically, there’s been a lot of turnover in the organization and they’ve sometimes struggled with morale issues when people didn’t feel like they had a stake in operations. That’s something Middleton sought to repair, starting with wage and working conditions.

“There’s a lot of tremendously valuable institutional knowledge that leaves the building every time someone leaves the organization,” he says. “The artist-run movement was conceived in the 60s with a utopian spirit that hasn’t always spread to labour. The goal is to retain some of that altruism by being better employers, mindful of artists and workers and avoid some of the labour issues that some large institutions are prone to.

“We pay a lot of lip service to things like CARFAC that ensure artists get adequately compensated for their work, but often times we don’t argue as hard for cultural workers who work in these spaces as for artists who exhibit in them.”

As in media, which often relies on unpaid or underpaid internships, there’s a danger if wages are so low in arts that only people who can afford to work for little pay can be part of it.

“Then you end up with only affluent people or people with trust funds who can participate in contemporary art,” Middleton says. “I don’t think that serves us very well as a society. That’s only a narrow part of the demographic, and I’m not sure those are necessarily the people we need to be hearing from right now.”

“The arts thrive on exchange, movement of ideas and people,” he says. “If we want to have a sustainable arts community, then artists have to be fairly remunerated and treated. Otherwise we would lose a lot of talented, interesting voices to other fields.”

How does the new minimum wage affect tipping at restaurants?

Richard has covered Toronto’s music scene for over a decade. He was once called a “mush-brained millennial blogger” by a Grammy-nominated singer/songwriter and “actually a pretty good guy” by a Juno-nominated director.