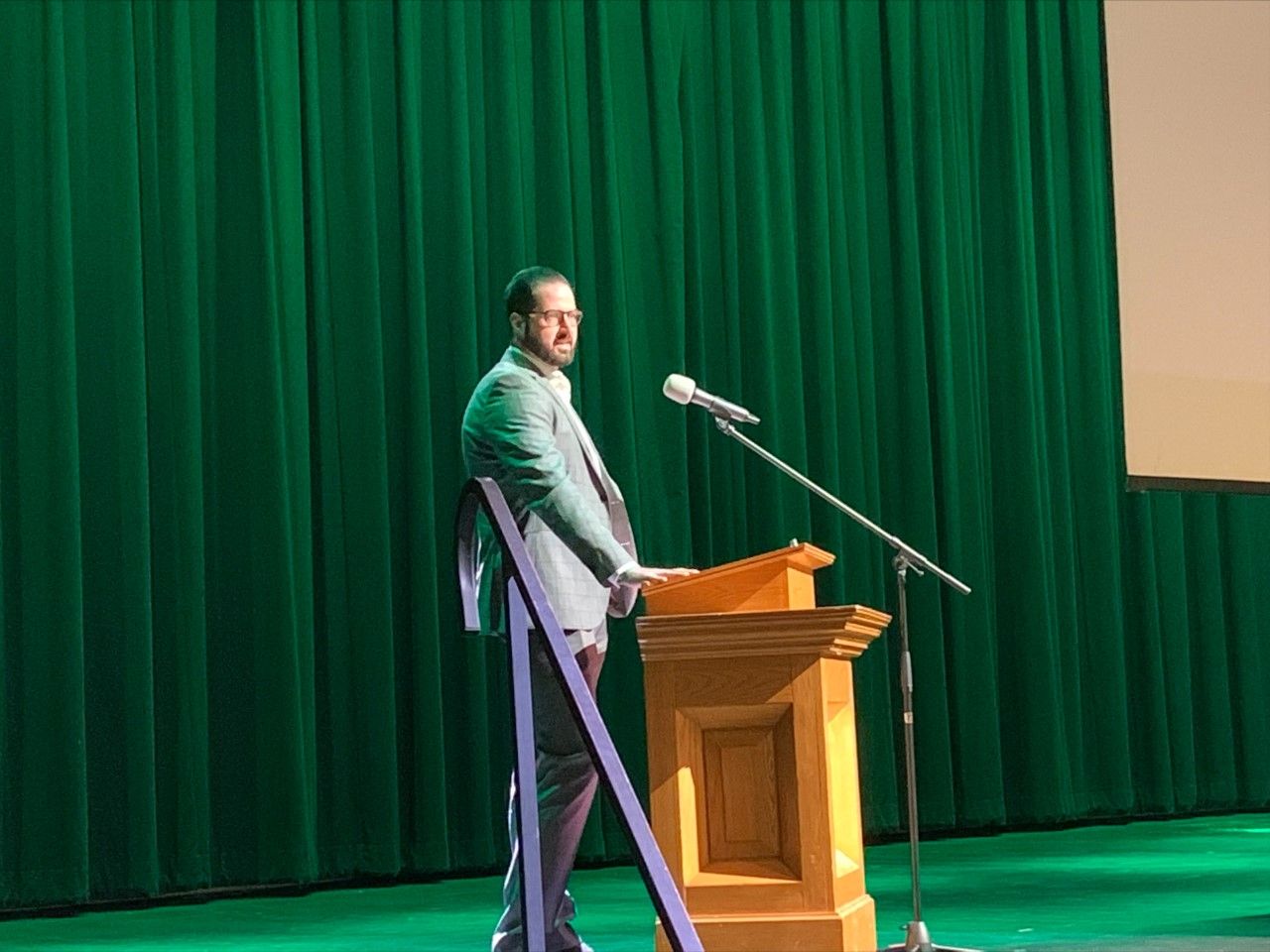 Remember to say your “I love yous.”

Be grateful every single day.

Chase your dreams because they will not chase you.

Those were the five pieces of advice a North Bay cancer survivor shared with hundreds of West Ferris Intermediate and Secondary School students Tuesday during the launch of the Trojan Parade for Cancer, which takes place May 31.

Matt Payne said it was in 2011 when he came home from his hunt camp and felt pain in his groin area that “changed the trajectory of his life.”

He told students he gave it some time to heal before heading to see his doctor.

But 10 days later the pain was still there and Payne said he knew he had to see a medical professional.

He underwent an ultrasound at the North Bay Regional Health Centre and from there things moved quickly.

Payne went to the CAT Scan, “thank goodness we have this in town.”

“I was 31. I was invincible, nothing was going to happen to me. Next thing I’m in this CAT Scan machine getting scanned. When I come out I’m told to call an urologist and there were two I could pick from.”

A week later, the urologist told him to drop his shorts and his words changed his life.

“Next week at the North Bay Regional Health Centre I had surgery to remove my testicle. It was in the morning and by the afternoon I was light in the pants.”

A week later Payne met with his oncologist and was given two options – do chemotherapy or wait and play the odds.

He played the odds.

In January, while playing hockey in East Ferris, Payne jumped over the boards and felt something “pop and rip.”

Within two hours he was at the hospital.

“I get a call at 3 p.m. that afternoon saying you’re starting chemo on Monday. It’s spread and it’s back.”

Payne said he’s thankful for all the facilities available to patients at the North Bay Regional Health Centre to “treat me quick.

“Early detection in cancer is so important.”

“It gave me an extra 10 years so far. When I was taking my treatments the last thing that mattered was my house or my car or how much money I had. It was all about friends and family. That’s what life is all about. Want more and want the next thing instead of being present with what we do have. And be grateful for that,” he said.

“Why do I get up to do this? When I was 31 I didn’t think about cancer. I didn’t worry about it and never thought cancer would affect me. But it did. It will touch all of us unfortunately. But days like today and the Trojan Parade for Cancer is incredible. And why is it incredible because you’re raising funds to save lives,” he said.

The Trojan Parade for Cancer is an annual fundraiser that started 27 years ago by a student whose loved one was diagnosed with cancer.

He said she gathered a few friends and walked the school track.

“It resonated with students and we’ve been carrying on that tradition for 27 years, raising more than $250,000.”

Robertson said this year the recipient is the North Bay Regional Health Centre.

“Every dollar will stay local. In the past we’ve donated to the Canadian Cancer Society, but it’s time to keep the money in our own community.”

Tammy Morrison, president and CEO of the North Bay Regional Health Centre Foundation, expressed her thanks to the students for choosing the North Bay health centre.

“Each year 1,200 area residents are diagnosed with cancer. Your hospital plays a big role in cancer care locally. You’re making a difference for your friends, family and loved ones and you’re making sure they have the care they need close to home.”

She said the government doesn’t fund medical equipment. It’s the responsibility of the hospital and the community.

“When the Trojan Parade for Cancer came to us. We’re so grateful.”