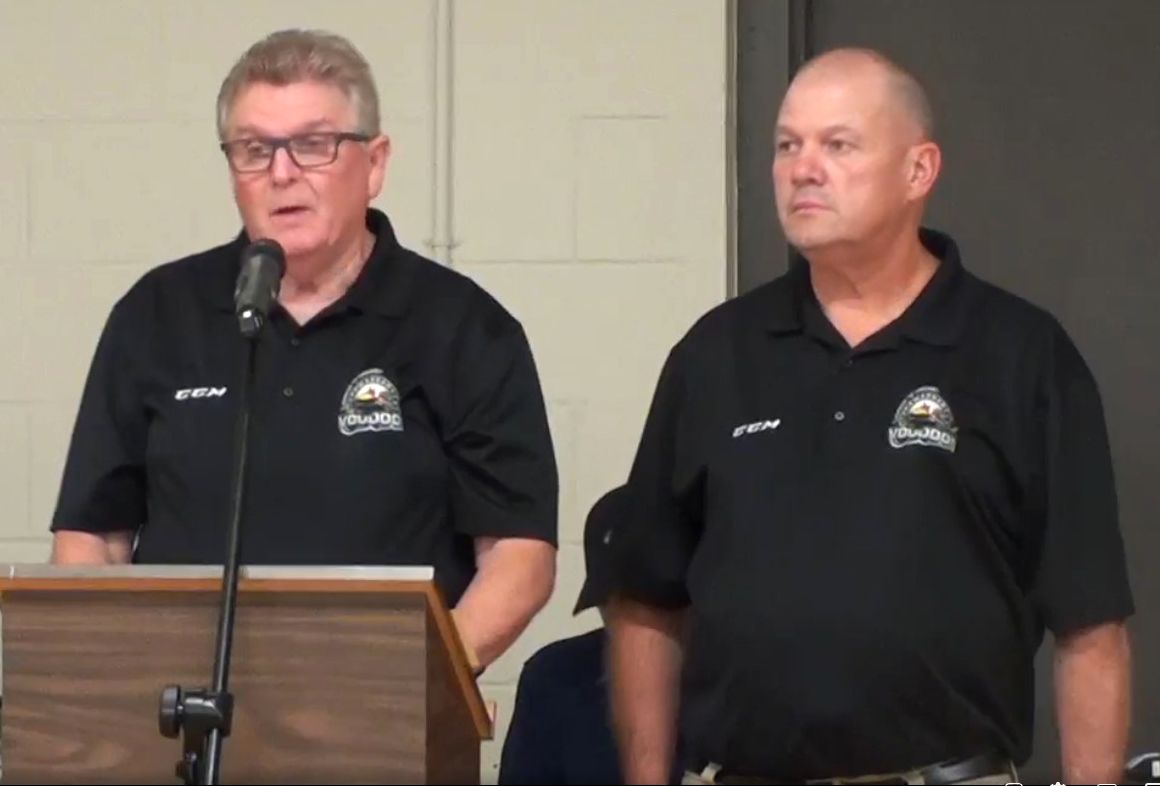 Jim Bruce, a co-owner and President of the Powassan Voodoos, has set the record straight on inaccurate statements made by Powassan council members involving the Junior A hockey team.

Bruce appeared at Powassan’s Tuesday town council meeting along with co-owner and treasurer Ray Seguin to clarify council statements made earlier when council members were discussing a new contract with the Voodoos.

The Voodoos have been in Powassan since 2014 and this is the third contract the team has signed with the municipality.

Bruce said throughout all that time there has been only one change made in the contract.

However, the latest round of talks saw some council members proposing major changes to the agreement.

Bruce told council he wasn’t “sure what the rationale would be to change the lease”  and immediately dispelled the perception that the Voodoos are a money-making operation.

In fact Bruce said just the opposite was true and he told the council since coming to Powassan in 2014 the Voodoos have experienced a shortfall every season.

He added as a non-profit organization it’s the team owners who make up the shortfall.

During the council debate in June when the contract was being negotiated, one suggestion had the council attempting to consider a clause where the municipality would get a portion of the revenue the Voodoos collected from the hockey advertising boards at the Powassan Sportsplex.

That didn’t sit well with Bruce, who said despite all the revenue that comes in, the Voodoos are lucky if they can break even.

He told council going into a season, the owners know they will lose money but the hope is the loss “won’t be too much.”

Bruce said the owners put as much into the Voodoos that they do because they enjoy being part of a hockey organization and adds the team “is also great for the community.”

Bruce then laid out numbers that indicate financially how good the Voodoos have been for the community.

“We don’t take any of it,” Bruce said of the draws.

“Half goes to the winner and the other half goes to Powassan Minor Hockey.”

Bruce said when it comes to concession sales during Voodoos hockey games, the money stays with the concession booth operator.

“We don’t take any concession money,” he said.

Bruce said over the years the Voodoos have been among the top ranking Junior ‘A’ teams across Canada meaning the municipality gets “very good name recognition within the hockey world in Canada.”

Bruce said the comments made about the team at the earlier council meetings cast the owners in a negative light.

“The comments made it look like we’re these greedy rich guys running a hockey team,” he said.

Bruce repeated his earlier statement that the owners believe the Voodoos are good for Powassan and added “we like it here.”

In his closing remarks Bruce offered the council members a challenge.

He said if each member of council bought a pair of season tickets he would personally donate from his own pockets $5,000 toward the opening costs of the arena.

A pair of season tickets cost $750, meaning the Voodoos would collect $3,500 from the five-member council.

But Bruce made his offer very clear.

Each member of council had to buy a pair of season tickets in order for him to ante up $5,000 towards the arena costs.
He said the council members could give away the tickets if they weren’t into hockey.

That leaves councillors Markus Wand, Randy Hall and Debbie Piekarski to take Bruce up on his offer.

For her part, Piekarski told Bruce it was not the intent of the council to make the Voodoos feel they are unwanted when the contract was being discussed openly.

In those earlier discussions both Piekarski and Hall pushed for more revenue collection in the new contract.

Hall told Bruce “everyone appreciates the Voodoos and we believe they are good for the community also.”

“It’s unfortunate that a number of events brought you to the point to think the Voodoos were being singled out,” Hall said.

“I don’t believe that was the case . . . but I apologize if it seemed that we were singling the Voodoos out.  That was certainly not the intent.”

Hall added he appreciated Bruce appearing before council to clarify the facts and wished the team well in the upcoming season and hoped it can go all the way to the championships.