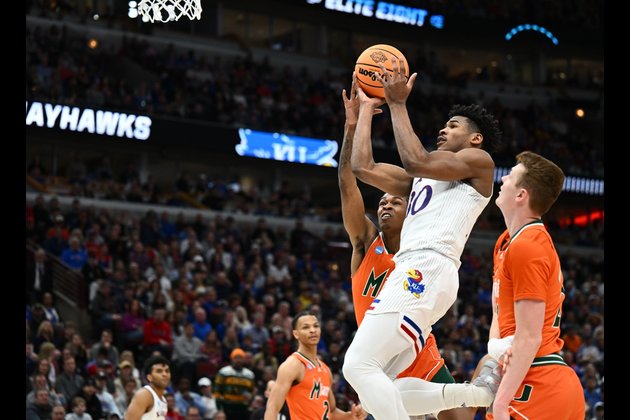 Kansas and Villanova each carry a nine-game winning streak into the NCAA Tournament’s Final Four, but the Wildcats will be missing a key component when the squads battle on Saturday in New Orleans for a spot in the national championship game.

Villanova standout Justin Moore tore his right Achilles in the final minute of the Wildcats’ 50-44 win over Houston in the Elite Eight on March 26. Moore underwent surgery, and the Wildcats are dissecting how to best fill his minutes and responsibilities.

Backup Caleb Daniels is expected to slide into the starting lineup for the second-seeded Wildcats (30-7), but Jayhawks coach Bill Self isn’t much interested in hearing that his team received a break.

“That’s certainly a blow to him and to the program and so sad for him, but they’ve got capable guys,” Self said of Moore’s injury. “They’ll bring Daniels in, or whoever, and they’re usually going to have five guards that we’re going to defend all the time on the perimeter.”

Top-seeded Kansas (32-6) would pose problems for the Wildcats under normal circumstances. And Villanova coach Jay Wright acknowledged the challenge will be tougher without Moore, who averaged 14.8 points per game, the second-best figure on the team.

“He’s probably our Most Valuable Player,” Wright said. “I just want everybody to know I think he’s underrated in terms of his value to this team. I think he’s truly one of the most complete players in this country, he really is.

“You have other guys who just don’t get the opportunity because he’s great. Other guys can step up and we can be a good team without him. There are guys that come off the bench that will be given more minutes and opportunities.”

Villanova star Collin Gillespie (15.6 ppg), the Big East Player of the Year, and Jermaine Samuels (11.1) will be expected to lead the charge. Samuels was named Most Outstanding Player of the South Region.

The Wildcats are in the Final Four for the third time in the past six NCAA Tournaments. They won national championships in 2016 and 2018.

Kansas’ last Final Four contest didn’t go well. It was against Villanova in 2018 and the Wildcats easily defeated the Jayhawks 95-79 two nights before they routed Michigan to win the national title.

Sixth-year Kansas big man Mitch Lightfoot is hoping the result will be different this time.

“It’s like it’s written,” Lightfoot said. “We played them in the Final Four and lost in 2018, and it’s only fair to go out there and play again and give them our best shot. I know they will give us their best shot. It will be a great game.”

The Jayhawks revolve around Wooden Award finalist Ochai Agbaji, who averages 18.9 points per game and has knocked down 96 3-pointers. Agbaji was the Big 12 Player of the Year.

Kansas has received stunningly good play in the NCAA Tournament from Remy Martin. Not once did Martin reach the 20-point mark in the regular season, but he has done so twice during March Madness and was named Most Outstanding Player of the Midwest Region after Kansas routed Miami 76-50 in the Elite Eight.

Meanwhile, Self expressed concern over the health of center David McCormack (10.1 points, 6.8 rebounds per game). McCormack has been dealing with foot soreness most of the season.

“We need David to play well. There’s no question about that,” Self said. “I wish his health allowed him to play more free and more healthy for an entire season. But I do think he’s feeling as well as he has all year long and we certainly need him to be big on Saturday.”

Of course, having a player fighting through an injury is better than being without a key figure.

“We do have a week here to adjust what we do without (Moore),” Wright said. “That’s what is unique about a Final Four. You only have to play two games if you’re really fortunate.”