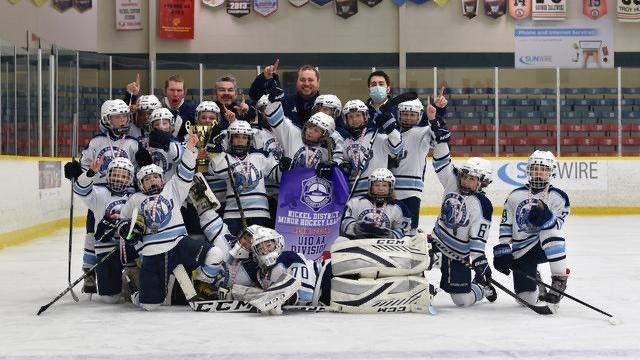 The format for the U10AA Division saw the top four teams from the regular season competing in Pool A, while the bottom teams competed for the B division.

The North Bay Trappers U10AA Team opened up their weekend with a 7-3 victory over the local Nickel City District Sons U10AA Team.

This second game was a pretty close affair, until late in the second period when the Jr. Greyhounds scored three straight goals to give them a 7-2 lead heading into the third period, with the final score ending up being 11-4.

The Soo Greyhounds have not lost a game in their AA division since their inception as a team four years ago.

After this loss, the Trappers faced a must win game against a U11A team from New Liskeard, who defeated the Trappers in their previous matchups in November.

This team showed their true colours, coming together for a 6-1 victory and setting up a repeat against their rivals from Sault Ste. Marie in the finals on Sunday.

The Trappers took an early 1-0 lead, the first time the Jr. Greyhounds had trailed to a AA team all year.

The Jr. Greyhounds came back right away and scored two quick goals to make it a 2-1. The Trappers then scored three in a row to take a 4-2 lead.

The Trappers clinched the championship with a 6-3 final.

Coach Justin Carré said that the was so proud of the resilience and discipline of his team, as they conquered a feat that many did not think was possible.

“We beat a very talented team today by winning battles in the corners, by backchecking and forechecking relentlessly, and by solid goaltending. We also faced some major adversity in this game, with our top scoring player being sidelined with an injury mid-way through the second period,” he said.

“Our boys stepped it up big time when it mattered. All in all, it was an incredibly gutsy team effort and the coaching staff is incredibly proud of these kids”

The Trappers continue their season this weekend, as they will be competing in the Silver Stick Finals against the best teams in their division across Ontario.