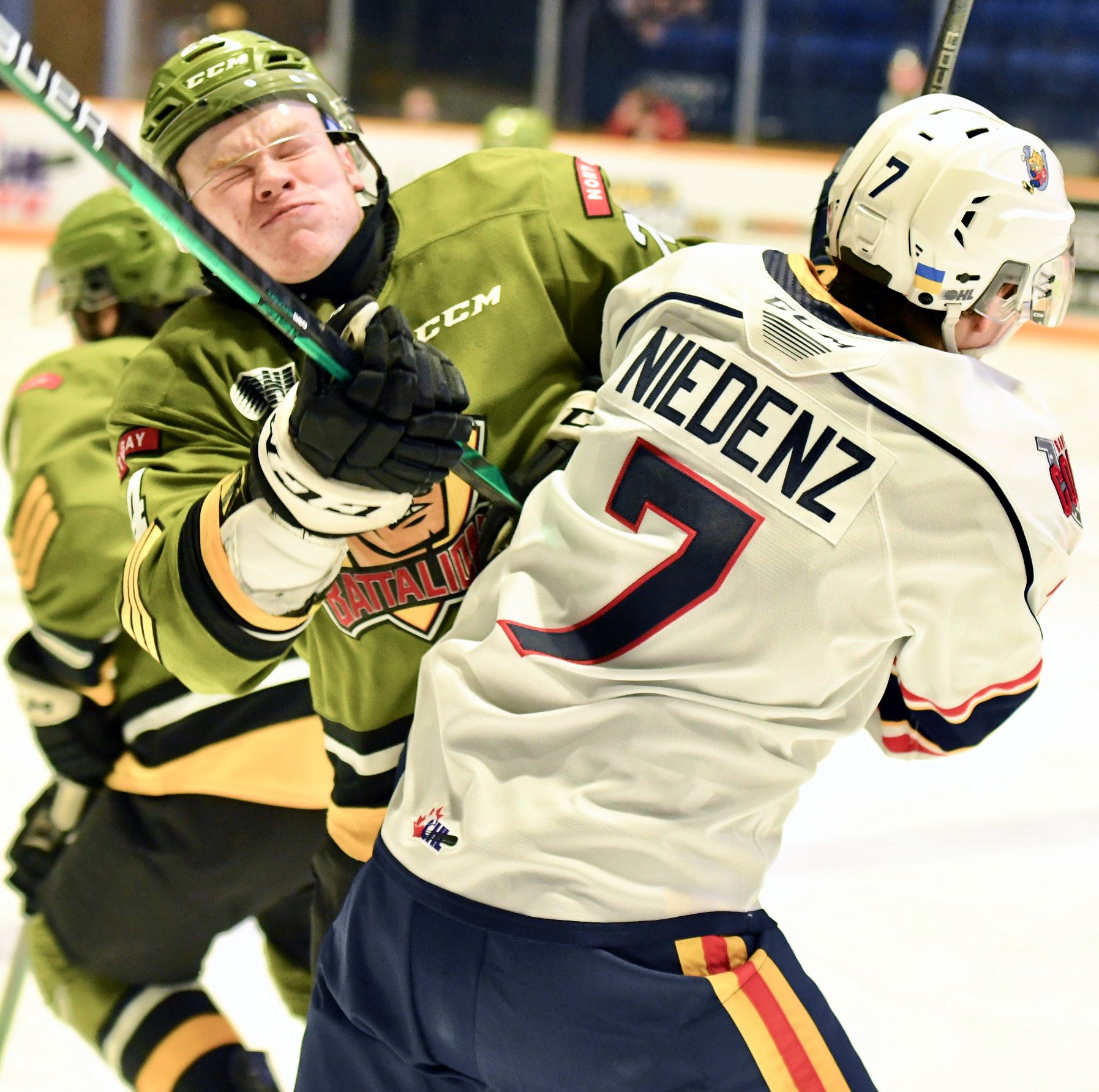 The two hottest teams in the Ontario Hockey League clash when the North Bay Battalion plays host to the Hamilton Bulldogs at 7 p.m. Thursday.

They’re also the top two teams in the Eastern Conference, as Hamilton sits atop the East Division and league with a won-lost-extended record of 40-12-4 for 84 points. North Bay, first in the Central Division, is second in the conference at 35-17-6 for 76 points.

“I think we all remember kind of what the feeling was,” Battalion coach Ryan Oulahen said Wednesday. “That was a good tell of a lot of things that Hamilton’s trying to do, which is fantastic to be able to see that, and when things don’t go our way, or we don’t play the way we need to, it can turn in a heartbeat, so those things will all be reminded to our group.”

Oulahen acknowledged his charges will have their hands full with the Bulldogs but said they’ll put the priority on their own performance.

“We always like to focus on ourselves first. Certainly, there are some things that Hamilton does that are interesting and that we’ve got to be aware of. They’re a team that just doesn’t have any holes. They made a significant push at the deadline there to improve their hockey team. They’re a good team.

“I’ve always said again, since Day 1, that the good teams kind of bring out the best in us, and we’re looking forward to seeing what we have here tomorrow night.”

Tnias Mathurin is expected to be back in the Battalion lineup after missing 15 games with an upper-body injury suffered in a 5-4 overtime win Feb. 4 over the visiting Sault Ste. Marie Greyhounds.

“If he gets through practice okay today, he’ll be playing tomorrow night,” noted Oulahen.

Fellow rookie defenceman Ty Nelson, meanwhile, was at Kitchener for the CHL-National Hockey League Top Prospects Game on Wednesday night, where he was to serve as an alternate captain for Team Red, which included Hamilton rearguard Jorian Donovan. The game showcased the top 40 CHL skaters and goaltenders eligible for the 2022 NHL Draft from the OHL, Western Hockey League and Quebec Major Junior Hockey League.

In 13 games since a Jan. 9 trade from the Peterborough Petes, Mason McTavish has seven goals and 13 assists for 20 points. He had two goals and one assist Feb. 25 and, in his only other game against North Bay this season, scored three goals, including a shorthanded empty-netter, in a 5-3 win at Peterborough in his return to the OHL from the NHL’s Anaheim Ducks on Nov. 25.

The Battalion embarks on a two-game road trip to complete play this week, visiting the Niagara IceDogs on Saturday night and the Mississauga Steelheads on Sunday.

The Hamilton game features Canadore Community Appreciation Night. Students from Canadore, a corporate sponsor of the Battalion, assist with video board presentations and game-night cameras. One high school student will win tuition for a year in an intermission contest, and prizes will be available at a table in the concourse.