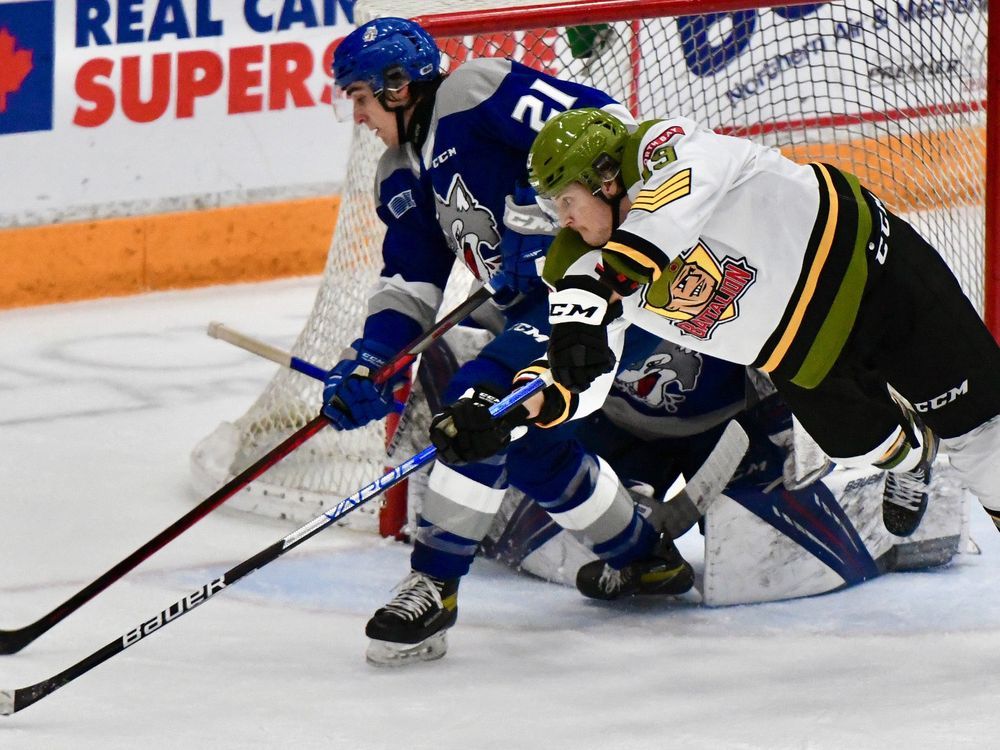 SUDBURY, Ont. — Kyle Jackson and Ty Nelson each scored one goal and added two assists to pace the North Bay Battalion to a 7-2 victory Sunday over the Sudbury Wolves, lifting the Troops into sole possession of first place in the Ontario Hockey League’s Central Division.

Kyle McDonald had one goal and one assist and Mitchell Russell, Nikita Tarasevich, Owen Outwater and Owen Van Steensel each scored a goal for North Bay, which improved its won-lost-extended record to 33-17-6 for 72 points, two more than the idle Mississauga Steelheads.

Goaltender Joe Vrbetic made 40 saves in a stellar performance in the second of back-to-back games at the Sudbury Community Arena. The Troops, who have won five straight games, defeated the Wolves 7-1 Friday night.

North Bay and Mississauga, which suffered a 5-2 road loss Saturday night to the Barrie Colts, have 12 games apiece left to play. The Battalion, 14-2-0 in its last 16 games, plays host to Mississauga at 7 p.m. Thursday after the Steelheads entertain Barrie on Tuesday night.

Landon McCallum and Andre Anania each had one goal and one assist for Sudbury, while goaltender Mitchell Weeks faced 39 shots before a crowd of 2,880. The Wolves, 19-32-5 for 43 points, fourth in the division and ninth in the Eastern Conference, have lost their last four games and grew increasingly frustrated with their inability to make up ground on the Peterborough Petes for the final conference playoff berth.

After taking a 2-1 lead late in the first period, the Battalion added three unanswered goals in the middle frame, sparked by Tarasevich at 4:46. He took a pass on the end boards from Matvey Petrov and went behind the Sudbury net to stuff a wraparound behind Weeks. It was Tarasevich’s fourth goal of the season and his second since a trade from the Sarnia Sting.

Outwater snapped the puck past Weeks’s blocker from the slot at 7:03 on assists by Anthony Romani and Paul Christopoulos, and defenceman Nelson scored unassisted off a rush from his own zone at 19:20.

Sudbury discipline deteriorated in the third period, with the Battalion failing to score on a two-man advantage lasting 1:02 before McDonald one-timed the puck home from the left circle at 11:10 during the second penalty. It was McDonald’s 33rd goal and his 16th since a trade from the Windsor Spitfires. Brandon Coe, with his 200th career point, and Jackson assisted.

Van Steensel scored his 10th goal on the power play at 16:34, connecting from a sharp angle on the right side, before defenceman Anania completed the scoring at 18:51 on a screened shot from the mid blue line. David Goyette and McCallum drew assists.

Sudbury took advantage of early penalty trouble for the Troops in the first period. After the visitors killed a minor for too many men on the ice, Coe was sent off for holding and unsportsmanlike conduct at 5:02. The Battalion survived the first half of the four-minute disadvantage before McCallum cruised across the slot to tip home a left-point drive by Anania at 9:02 as the man advantage expired. It was recorded as an even-strength goal.

Russell replied on the power play at 12:19, putting the puck past Weeks after Jackson fed it out from behind the net. It was Russell’s team-leading 34th goal.

With the Battalion back on the power play, Jackson won a faceoff in the left circle back to Nelson, who delivered it along the blue line to Coe for a right-point drive that Jackson, getting to the slot, deflected for his 24th goal at 19:02.