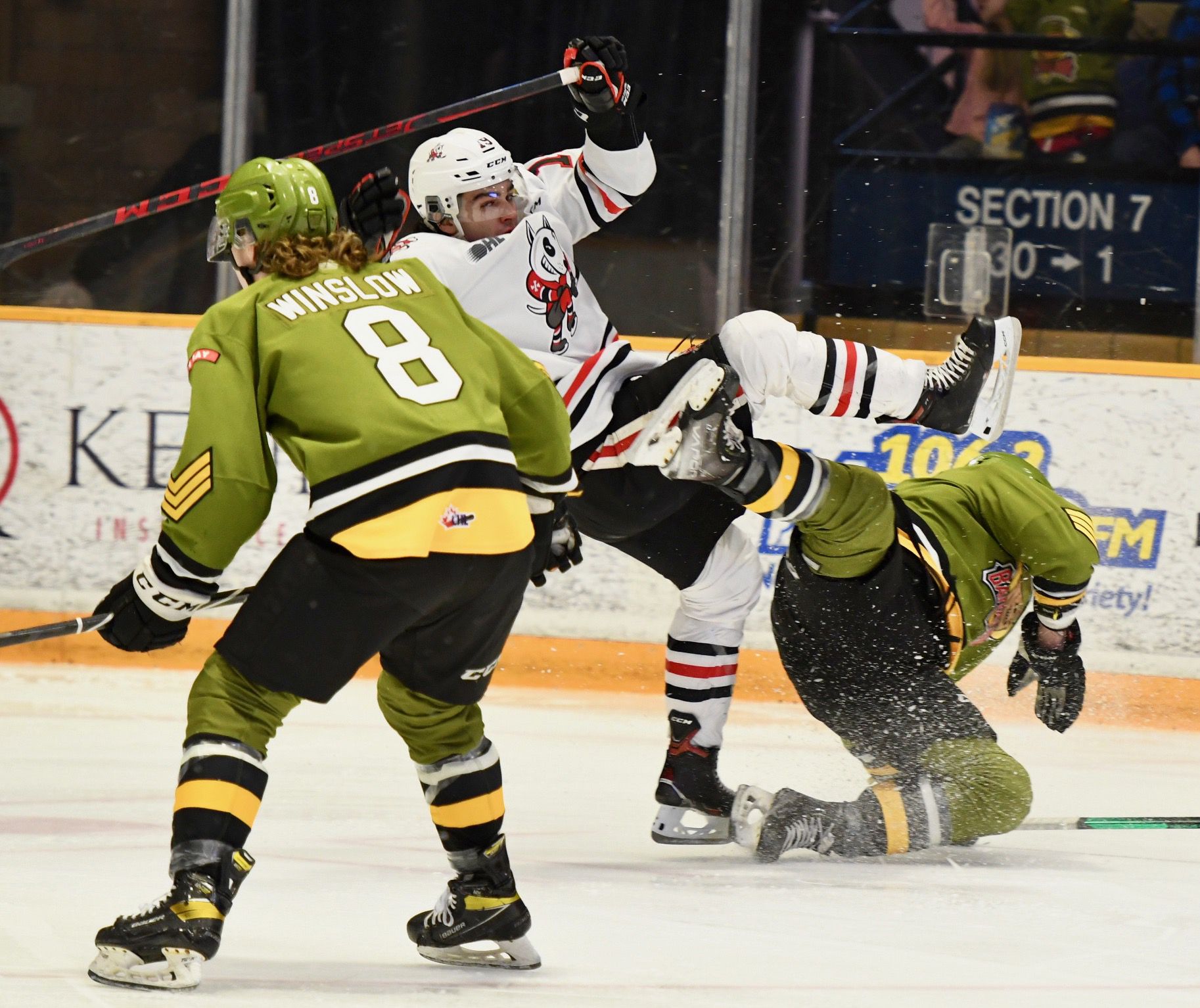 Kyle Jackson, Dalyn Wakely and Matvey Petrov also scored for North Bay, which improved its won-lost-extended record to 38-18-6 for 82 points. Goaltender Dom DiVincentiis made 21 saves, and Mitchell Russell provided two assists before a crowd of 2,070.

The Battalion, which has won its last three games, is 19-3-0 in its last 22. The Troops have six games left to play, one more than Mississauga. North Bay finished 5-1-2 against Niagara in the season series, including 3-0-1 at home.

The Battalion was without Kyle McDonald, who faces possible supplemental discipline after a check on Chas Sharpe in the third period of a 2-1 win Sunday at Mississauga. No penalty was assessed on the play.

Danil Gushchin scored the visitors’ lone goal, while goaltender Josh Rosenzweig was stellar in defeat, making 43 saves for Niagara, 20-37-4 for 44 points, fifth and last in the division. The IceDogs dressed 16 skaters, two below the limit, including only four defencemen.

Jackson opened the scoring at 4:17 of the second period, converting a Coe pass from the end boards. Also assisted by Russell, it was Jackson’s 27th goal of the season.

Gushchin, who returned after missing three games with an undisclosed injury, replied with his team-leading 37th goal at 18:25, taking a pass from Pano Fimis and, using Ty Nelson as a screen, scoring on a wrister from the left circle.

Wakely scored what proved to be the winner 1:33 later, deflecting a Paul Christopoulos shot from above the left circle. Russell also assisted on Wakely’s 15th goal.

North Bay outshot Niagara 27-7 in the period, setting a season high for shots on goal in a frame. The previous high was 23 in the second period of a 3-2 loss Oct. 28 to the visiting Oshawa Generals.

Petrov connected with the man advantage at 13:34 of the final period, one-timing a Nelson pass from the left circle to beat Rosenzweig to the short side. Coe also assisted on Petrov’s 35th goal, which came on the Battalion’s fourth consecutive power play in the frame.

Rosenzweig left for a sixth attacker after a Niagara timeout at 18:10, which was countered by North Bay 22 seconds later, before Coe skated the puck to the empty net for his 33rd goal at 19:09.

Niagara held a 10-5 edge in first-period shots, with each team enjoying one power play.

Nic Sima set Anthony Romani loose on the right wing, forcing Rosenzweig to make a good stop at 7:02, and DiVincentiis denied Dylan Roobroeck at the lip of the crease at 10:24, just 10 seconds after the Niagara man advantage ended. Brenden Sirizzotti tested DiVincentiis off the right wing in the final minute.

The Battalion plays host to the Barrie Colts at 2 p.m. Sunday. The game is to be presented by the North Bay Youth Soccer Club.

BATTALION BULLETS: The Battalion saluted the Nipissing University Lakers women’s team, which took silver at the U Sports national championship, losing the title game to the Concordia Stingers of Montreal by a 4-0 score Sunday at Charlottetown, for the best finish in program history. Nipissing’s head coach is Darren Turcotte, a four-year member of the North Bay Centennials and a veteran of 635 National Hockey League games … On Cogeco Minor Hockey Night, the ceremonial faceoff was conducted by YourTV volunteers Jayden Wright and Eoghan Drumm, accompanied by Mike Brideau, president of the North Bay & District Girls Hockey Association … The Battalion went 9-1-0 in March … North Bay was 1-for-6 on the power play. Niagara went 0-for-1 … In 142 games with the Battalion, Russell has 67 goals and 73 assists for 140 points, tied with Nick Paul for 22nd in franchise history. Russell has an 11-game points streak in which he has nine goals and 10 assists for 18 points. In eight games against Niagara, he had eight goals and as many assists for 16 points … In seven games against Niagara, Coe had seven goals and 13 assists for 20 points … Apart from McDonald, North Bay scratched Cam Gauvreau … Nelson turned 18 Wednesday, while Sima marked his 17th birthday Thursday … Among Niagara’s missing were Dakota Betts, Liam Van Loon and Rodwin Dionicio, all suspended.