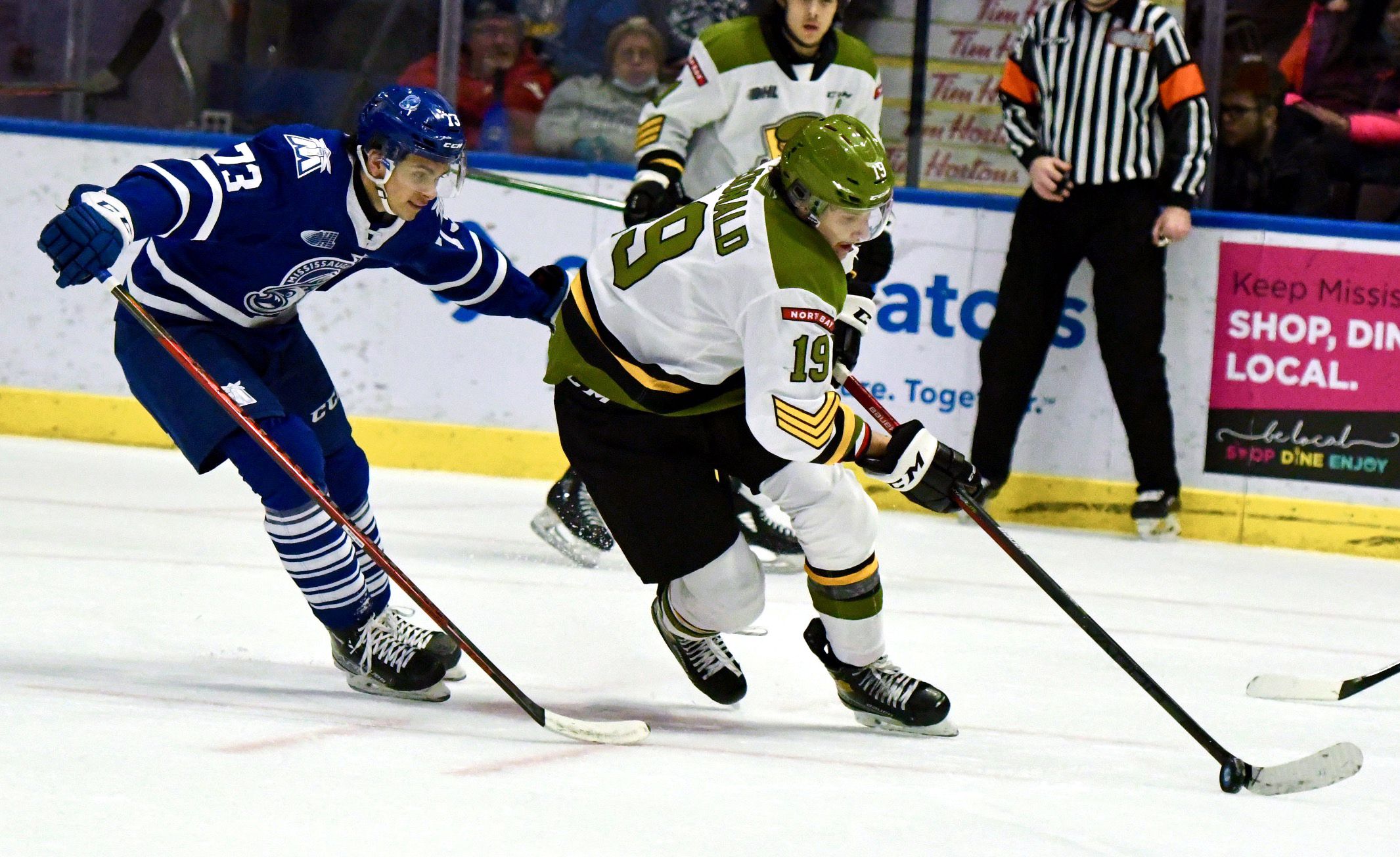 The North Bay Battalion continues its mission to finish first in the Ontario Hockey League’s Central Division when it entertains the Niagara IceDogs at 7 p.m. Thursday.

North Bay, with a won-lost-extended record of 37-18-6 for 80 points, leads the division by three points over the Mississauga Steelheads after a 2-1 victory Sunday at the Paramount Fine Foods Centre. The Battalion holds two games in hand on Mississauga.

The Troops wrap up their season series against Niagara, their first divisional rivalry to be completed, as it’s made up of eight games. The Battalion faces the Sudbury Wolves 12 times and each of the Barrie Colts and Mississauga 10 times in the special schedule formula for 2021-22.

Niagara, 20-36-4 for 44 points, is last in the division and Eastern Conference, which is topped by the East Division’s Hamilton Bulldogs with 91 points. Division winners are seeded first and second, regardless of other teams’ point totals, for the conference playoffs, with eight of 10 teams qualifying.

The Battalion has seven games to play, four at home and three on the road. Apart from Niagara, visitors to Memorial Gardens are Barrie on Sunday, Mississauga next Thursday night and the Oshawa Generals on April 14. The Troops visit Barrie on April 9, Sudbury on April 15 and Oshawa on April 17, the last day of the schedule after it was extended two weeks because of postponements related to covid.

Mississauga has five games left, playing host to Sudbury and the Kingston Frontenacs and visiting the Ottawa 67’s, North Bay and Oshawa.

Barrie, with 68 points and the only other team with a chance to finish first, has 10 games left, five at home and five on the road. The Colts host Sudbury on Thursday night, the London Knights, the Peterborough Petes, North Bay and Hamilton. Barrie visits North Bay, Kingston, Peterborough, the Owen Sound Attack and Niagara.

Against the Battalion, Niagara will be without Dakota Betts, Liam Van Loon and Rodwin Dionicio, all of whom are suspended, with Betts eligible to return Friday night at Sudbury after being banished for two games for drawing an abuse-of-official misconduct last Saturday night in a 6-4 home loss to North Bay.

That game featured Battalion coach Ryan Oulahen being credited with his 100th OHL win and a fire alarm activation that interrupted the first period, which was completed after the first intermission.

Apart from suspensions, the IceDogs’ leading scorer, Danil Gushchin, with 36 goals and 29 assists for 65 points in 43 games, has missed the last three games with an undisclosed injury.

In addition, the Nipissing University Lakers women’s team will be honoured in the first intermission. They finished the season as U Sports silver medalists, losing the national championship game to the Concordia Stingers of Montreal by a 4-0 score Sunday at Charlottetown.