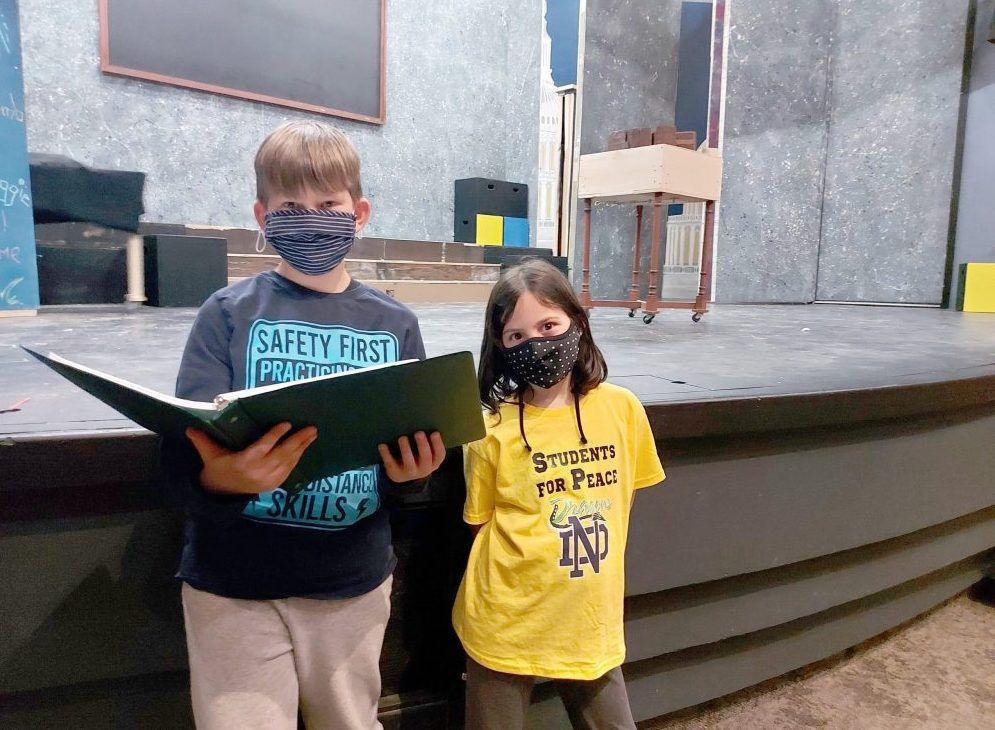 It is time for the kids to shine on the Roxy stage.

After being re-established in late 2020 during the height of the COVID-19 pandemic, the Roxy Young Company will finally get the chance to present a full-scale production to a full house with its production of Matilda Jr. The Musical. The show is the final act of Owen Sound Little Theatre’s 2021-22 playbill, which began with a Curious Incident of the Dog in the Night-time in November, followed by A Red Plaid Shirt in February and Born Yesterday in April.

It will be the first time in front of a live audience for many of the approximately 30 young actors, which is sure to bring out some nerves, but also plenty of excitement.

“It has been a bit nerve-wracking for me because it is kind of scary to go on stage, but being with everybody else and knowing nobody is going to judge me I feel included and I don’t feel scared,” Nine-year-old Lilah Glasser said prior to  recent rehearsal of the production. “It is actually quite cool because I would never think I would be on stage in front of people and people would notice me, but now it is kind of coming true. I am very excited to do it.”

Glasser, who plays the role of Lizzy in the play, said she looks forward to performing in front of her family.

“I think the secret is having fun and enjoying what you are doing,” said Glasser. “It has been a lot of work getting ready, but I always think of how we are almost done and it is going to be amazing. I always look at the positive side and it has been good doing this.”

Miles Robart is also looking forward to show off his work in the play, but for the nine-year-old it won’t be on stage, but rather in the sound booth as his role is in the tech department for the production.

Robart said he has learned a lot through the experience, including the importance of listening to instructions and never missing a cue.

“I enjoy working with a computer,” said Robart, who has been working closely with stage manager Sandy Lemaitre and Gary Byers in the sound booth.

With a void in theatre and acting opportunities locally for youngsters, the Roxy Young Company was revived in 2020 after it had been shelved for several years. But because of the COVID-19 pandemic, the children and youth taking part weren’t getting the full experience of being involved in a stage production, as much of the program was pushed online.

Director Lacey Mooney said they have done some camps and workshops teaching the kids about theatre production, but Matilda Jr. will be the first big production for the company since its revival. It will also be her first time directing a show for Owen Sound Little Theatre

“Some of them have done camps and stuff, but this is the first big show for the majority of them,” Mooney said. “It is a huge deal.”

Mooney said Matilda Jr. was chosen because the movie, directed by Danny DeVito, was one of her favourites as a kid. She had also seen the stage production of Matilda before in Toronto and really liked it, though she felt it was long. So she chose the Junior version because it takes the best moments and condenses them into an hour-long show.

“You also want something that is well known that will draw people in,” said Mooney. “Plus we needed to find something that had a lot of female characters because we have a lot more girls than we have boys, as there often is.”

The production is based on the popular 1988 Raold Dahl book Matilda, which was also made into a movie in 1996. In 2010, Matilda The Musical was adapted by Dennis Kelly, with music and lyrics by Tim Minchin. It went on to win multiple awards, receive widespread critical acclaim and box-office popularity.

It tells the story of young Matilda, a girl with astonishing wit, intelligence and special powers. She is unloved by her parents, but impresses her teacher Miss Honey. But while attending Crunchem Hall Elementary School, Matilda is faced with the wrath of the school’s mean headmistress, Miss Trunchbull, who hates children and is always thinking up new ways to punish them.

But with her courage and cleverness, Matilda inspires her peers to stand up and revolt.

Rehearsals started online over Zoom in January with Mooney in front of a camera on stage at the Roxy talking to her young performers. But since then they have been able to get together and work on the production in person.

Mooney said last week that they were in the final stages of preparation and everyone was ready for the main events.

“Especially when you think this is their first show and for lot of them it is the first time being social in two years, everyone is doing great,” Mooney said. “They are ready.”

Because it has been such a fast turnaround from OSLT’s last production of Born Yesterday, which wrapped up April 30, they have been able to use much of the same set panels. The stage has been transformed from an upscale art deco Washington, D.C. hotel room into a Crunchem Hall classroom.

“I have never seen so many people helping on set,” Mooney said. “They needed it, because taking one down and putting another one up is absurd. They have been working tirelessly.”

It is sure to be a busy time for the youth involved in the production as they are set to present eight shows over four days between May 11 and 14.

As of Saturday, there were just a few single seats left of the public showings of the production on May 13 and 14. Students of area schools have the opportunity to take in the show at special presentation on May 11, 12 and 13.

“It is just phenomenal. Promotion is just starting now, so it has just been word of mouth and a lot of families looking to get out and do something again,” Mooney said. “Also, this cast has so much support and have so many people coming to see it.”

Mooney said they are happy to have the support of the area schools as well.

“I know the kids are nervous about having their classes coming to see it, but it is exciting and that is what we hoped for,” Mooney said.

For its OSLT productions, the Roxy continues to have a socially distanced seating plan in place, with seats left open on either side of groups of tickets sold. Proof of vaccination and masking requirements have been extended at the theatre, with proof of vaccination checked at the door, and masks required throughout the theatre.