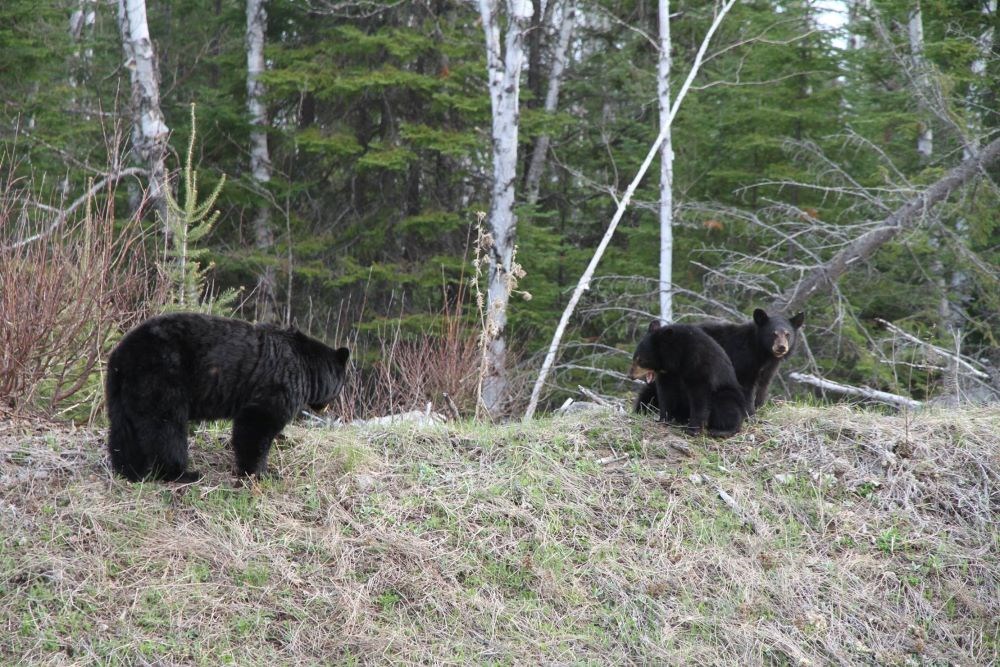 A question from the other day, “Are the bears out yet?” The voice modulation seemed a bit like a Goldilocks query. But the bears are awakening and we will are thinking of opening our camps and cottages, planning camping trips to provincial parks and beyond, and walking designated nature trails.

Along with your water bottle, bug spray, (don’t forget McKirdy’s), trail mix, sunscreen, and other common items when planning an outdoor excursion are bear deterrents. All are required but one of the foremost bear researchers finds that “common sense” is the most important thing that you should take along.

For more than 20 years contact has been made with one of the leading bear researchers in the world this will be a fourth story; with Dr. Stephen Herrero, University of Calgary professor emeritus. Take this to the woods, “Your best weapon to minimize the risk of a black bear attack is your brain.”

Numbers show that since the 1950s, brown bears, black bears, polar bears, cougars, wolves and coyotes have been involved in 700 attacks on humans in North America and Europe.

He said research indicates that half of the attacks were the result of inappropriate human behaviours. This may not seem to be a lot when compared to the number of times we go to the great outdoors.

“The cases of children injured or killed while left unattended by their parents, attacks on people jogging or walking alone at twilight and during hunting, should make us reflect on our responsibilities,” said Herrero.

We must learn how to behave in bear habitats to help us avoid encounters.

The irony of why black bears become food-conditioned is that the people to blame are seldom injured for their littering behaviour. Is the bear to blame? It is doing nothing more than following a foraging strategy.

If a black bear attacks in any place where the bear has been habituated or food-conditioned the first assumption should be that you are too close to the bear or it is after your food. Simply backing away and watching the bear should end the attack.

Dr. Herrero said if an injury occurs, give up the food. People who play dead or run away are inviting the bear to continue the attack.

In a rare situation where you meet a predaceous bear, “fighting off the bear could save your life, he said. “Research has shown that running towards, clapping hands, shouting and throwing objects at bears can be effective.”

“From an early age, most of us learn social norms, rules and how to decrease risks in urban environmental settings, but much less effort is expended to teach us how to behave appropriately in areas inhabited by bears,” Herrero said.

The number of people engaging in outdoor leisure activities in areas inhabited by bears has increased over the past few decades, which ultimately increases the probability of an encounter with a large carnivore.

Understanding the circumstances associated with large carnivore attacks is something that Herrero sees as useful to reduce the occurrences. He explains that it is in our hands to change the observed trends.

“If the bear becomes used to the stimulus it becomes habituated or used to people,” Herrero said. “In most cases, the bear runs or ignores people. Bears that eat people’s food or garbage become food-conditioned.”

It is a simple association – “people” may be followed by “food.” Habituation combined with food conditioning has been associated with the majority of injuries and deaths.

Most people don’t fear black bears as they do grizzlies. It is the casual manner with which many people treat black bears that alarms Herrero.

“They can bite through live trees thicker than a man’s arm and kill a full-grown cow with a bite to the neck.”

He states the “campground” or “garbage” black bear found so commonly near parks and landfill sites seems only to be involved only in incidents of minor injuries.

“It is mainly black bears found in rural or remote areas – where they have little association with people – that occasionally try to eat or kill a human being. The predaceous black bear typically charges a person only once and does not leave unless it is scared away.”

“When sleeping at night I like to have a foot or two between me and the tent wall. Curious or garbage-addicted bears will sometime bite or claw the sides of a tent as if testing to see if something edible is inside.” (I should heed this advice, more on that in a bit.)

A flashlight is important when camping around bears. A marauding black bear can usually be chased away by making noise, such as by shouting or banging pots.

“If you have to leave the tent at night to go the bathroom a flashlight allows you to check the general area for bears.”

And man’s best friend is a valuable ally. Like the bear, dogs have an acute sense of smell and can serve as an early warning system that a bear is around.

“Caring people, when presented with such information, can shape their behaviour to decrease chances of black bear attacks,” says Herrero. “This also would contribute to carnivore conservation as people learn how to live safely in closer proximity to large carnivores.”

Even with the number of attacks increasing over time, attacks of this nature remain extremely rare although they are often overplayed which causes increased fear and negative attitudes towards coexisting with and conserving many large carnivorous species.

“Educational efforts aimed at decreasing the risk of bear attacks should not focus exclusively on people living in rural areas, but on the general public,” says Herrero. “People living in cities should be properly informed because of the increasing number of them enjoying outdoor activities and the expanding population bears in proximity to suburban areas.”

This is often where designated conservation authority or municipal trails are located.

For berry pickers, he suggests that you are constantly watching for bears and fresh bear signs (scat; trampled areas).

“If you are picking with children keep them close to you. There are well-documented cases of black bears killing young children while berry picking.”

For the angler, he recommends that fish guts be dumped directly into the lake or stream while making sure the air bladder is pierced.

At the same time, Dr. Herrero states, “If human aggression is carried too far, even the tolerance of black bears can be exceeded and an attack could be triggered.”

There is no substitute for alertness, focus and knowledge about bears. Read the study ‘Human behaviour can trigger large carnivore attacks in developed countries’. Secure his book Bear Attacks.

Estimating bear populations is difficult. Ontario is home to a healthy and sustainable population.

We can’t go into the woods and count them or have them fill out a census. Noninvasive survey sites are being baited with sardines in forested areas. As the bear enters the site, it brushes up against barbed wire strung around the area, leaving behind a hair sample. Sites are visited once a week during late spring and early summer to collect these hair samples within each of the wildlife management units (95).

In Ontario, it has been estimated there are approximately 100,000 bears but with a partial reinstitution of the controversial spring bear hunt in 2014, the real number is unknown.

Also, there has not been an influx of American hunters for two years.

The ministry has been working to update black bear population estimates since 2017 with surveys conducted between 2017 – 2019 in Wildlife Management Units (WMU) across the province.

Surveys planned for 2020 and 2021 were deferred until 2022 due to COVID-19 concerns relative to the implementation of those surveys. As such, the ministry doesn’t have a complete set of black bear population data to examine shifts in population abundance and trends over that timeframe.

Hunters (both resident and non-resident) supply the ministry with updated hunter harvest information which ministry staff use to help inform decisions on the sustainable harvest of black bears.

It’s important to note that black bear populations are affected more by natural food abundance than by hunting activities.

If you do want to go hunting in the spring, bear hunting packages like this one are available. Interesting as last week it was glamping packages.

Just to be clear before reporting bear encounters; from the provincial ministry, Northern Development, Mines, Natural Resources and Forestry, the ‘Be Bear Wise and Prevent Bear Encounters’ website. Consider enlarging the bear density map first and then review Bear Wise: Tips and Tools. There is a great deal of information on black bear behaviour.

“Not every bear sighting is an emergency situation,” says the site.

The sited describes non-emergencies as a bear roaming around, checking garbage cans, breaking into a shed where garbage or food is stored, being in a tree, pulling down a bird feeder, knocking over a barbecue or moving through a backyard or field but not lingering.

“For emergency situations, call 911 or your local police if a bear poses an immediate threat to personal safety and exhibits threatening or aggressive behaviour, such as: enters a schoolyard when school is in session; stalks people and lingers at the site; enters or tries to enter a residence; wanders into a public gathering or kills livestock/pets and lingers at the site,” the site says.

“Police will respond first to an emergency situation but may request assistance from the ministry during daylight hours. This line operates 24 hours a day, seven days a week, from April 1 to November 30.”

See more here and pay special attention to the section “When to use self-defence.”

“If you have tried everything possible to get a bear to leave your property and you are afraid for your safety, you have the right to protect yourself and your property,” the site says. “Killing a bear in self-defence must be an action of last resort. Any action you take must be done: according to applicable laws (for example, local discharging a firearm by-law) safely, in the most humane way possible.”

“The busiest season was 2016 with 7,457 occurrences,” Forbes said. “A late spring frost the week of May 28, 2021, had detrimental impacts on developing blossoms and fruit, wiping out berry crops in several areas of the northeast region of Ontario. Kirkland Lake, Timmins, Hearst and Wawa were all very busy in 2021 as a result of the late spring frost.

“Interestingly, traditionally busy districts including Sault Ste Marie, Sudbury and North Bay were missed by the frost and experienced a relatively quiet season.

“Ontario’s northwest region experienced one of its busiest bear seasons in recent years. The late spring frost followed by drought and then wildfires had a catastrophic effect on natural foods.

“Conversely, the southern region had a quiet year overall, with average to good natural foods in most districts.

“Because of low natural foods in the northwest and parts of northeastern Ontario, we anticipate fewer cubs being produced this past winter in those areas. Other parts of the northeast and the entire southern region can expect normal to good cub production this year.”

This writer has had the unnerving, experience of having a black bear sniff at his head with only the tent’s synthetic wall in between; a probing wet nose; awakening from a deep snooze, created a frenzied response in the middle of the night; both parties went their ways.

“Are the bears out yet?” A conditional sign of spring question? All of this is bearable on the back roads but be prepared as sightings will start any day now.