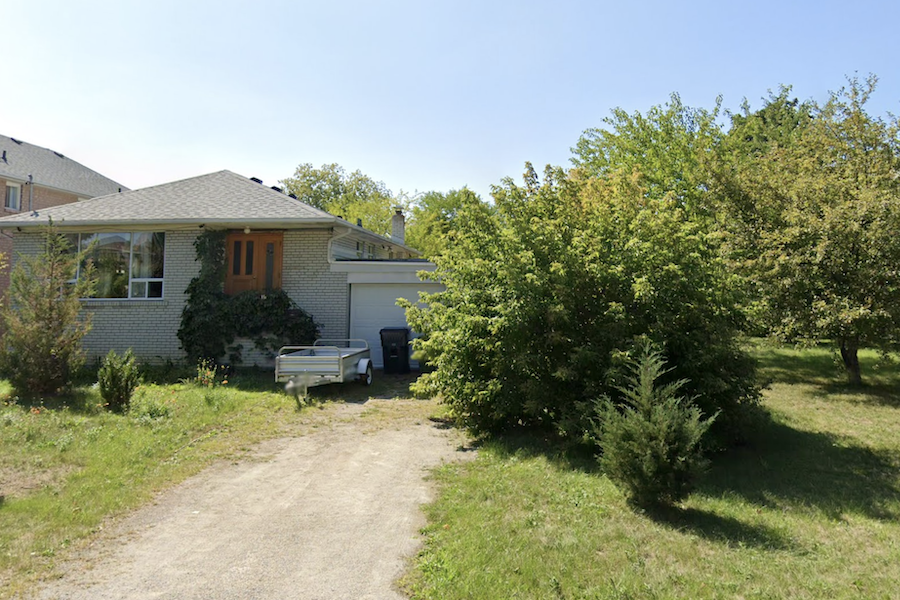 This Scarborough property at 16 Payzac is listed for $3 million. The bungalow may not actually be included.

Bungalow owners in Scarborough with a lot of surrounding land are trying to cash in on a Toronto real estate market that is costing more than ever.

As of right now, two large lot properties are for sale on the city’s east end for $3 million, much higher than the $2,073,989 average selling price in February for a detached home. These listings are calling on builders and developers to consider tearing the sites up to make way for several townhomes or rental units.

A two-bedroom bungalow at 232 Bellamy North is listed at $3.1 million. The listing shows no photos of the work looking home’s interior because what’s really for sale is the nearly half-acre lot. The home is near Eglinton, where the new LRT line that has been wreaking havoc during construction is promising hiked up property values all across Scarborough.

A similar mindset is fuelling the price at 16 Payzac, near Galloway. The bungalow owner in this case doesn’t appear to be selling their home, which isn’t pictured on Toronto real estate sites. Instead, the listing appears to only offer the surrounding L-shaped land – which is said to be more than half an acre. The property backs into the site of a future condo development along Kingston Road. Listing agent Mena Bishay could not be reached for comment.

These properties are the latest in a line of Scarborough bungalows sitting on expansive lots listed at exorbitantly high prices to maximize future value as Toronto real estate prices soar and the city and developers see opportunity to build in more density. If you think $3 million is a lot. Check out this bungalow listed for $8 million. These listing prices aren’t really leaving a lot of room for builders and developers dealing with high construction costs to profit off the speculative prices. And as Bank of Canada deputy governor Paul Beaudry said in a speech last fall, this type of speculative buying is driving up prices further and making the real estate market in Toronto and beyond vulnerable.

Some real estate experts like Peter Routledge, head of the Office of the Superintendent of Financial Institutions, expect prices to dip after the speculative boom has maxed itself out and in interest rate hike coupled with more supply and general fatigue cool off the heated market.