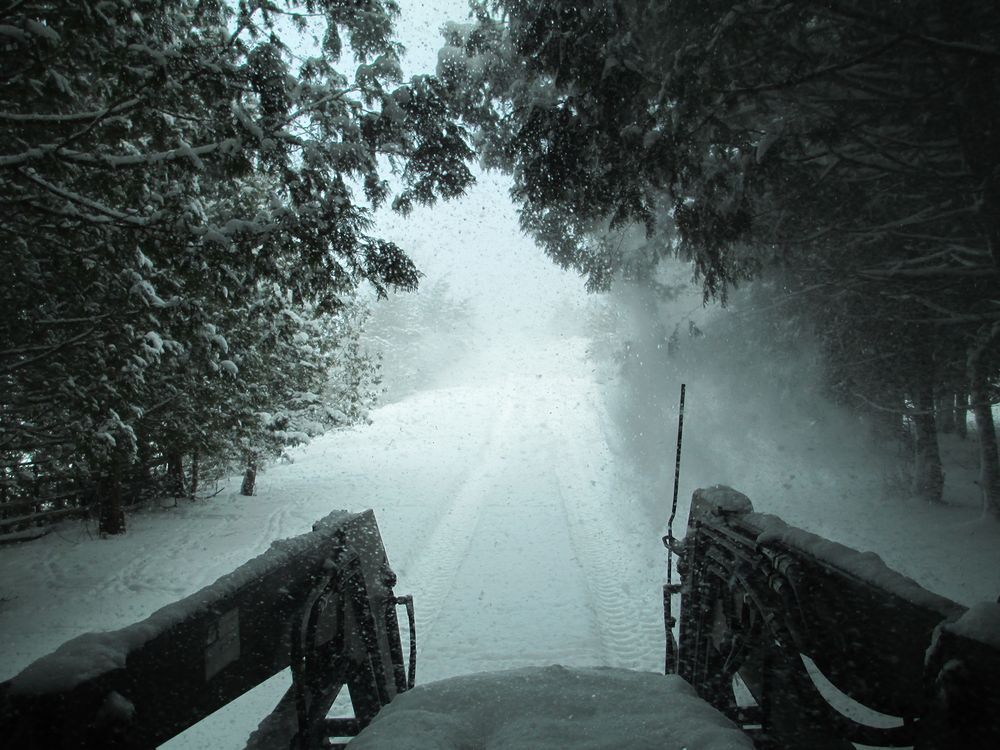 My mother had warned me not to touch it. We were at “the nice lady down the road’s” house. My Mom was always helping someone, and sometimes I went with her to visit. They would have tea and I would most times get a cookie and some milk.

The glass snow globe was heavy, so I held it tightly with both hands. Through the glass, I could see beautiful mountains and trees. I turned it over and then shook it ever so gently. Being extremely careful not to drop it, I would quickly flip it back. Fluffy, beautiful snow fell and covered that miniature world. I turned that globe upside down and right side up, over and over, all the while listening for the footsteps that would surely bring big trouble. I remember wishing that I could climb through a magic door. To enter this world of beauty and wonder. A world that I believed had no worries or troubles. A world of my very own.

One early winter’s day in the wee hours of the morning on the farm, I found that magical world inside my very own snow globe. I had climbed over the rail fence with my snowshoes on and there was that world I had almost come to believe never really existed.

I was overjoyed and so grateful to find that it was just as I had always believed it would be.

Quickly I snowshoed over to the trees. It was as if someone had finally picked up that snow globe that was never to be touched. They had purposely taken it down from the shelf high above their head. They had shaken that little glass snow globe. Then had quickly turned it back over. That forbidden gesture had made the beautiful snow swirl around. This time I was right in the middle of that miniature world. My wish had finally come true.

The tree branches that hung just above my head were completely weighed down with heavy snow. Some of those pine tree branches were perched only inches above that ground, covered with this light, fluffy snow. I could feel those huge snowflakes land on my face. They gently clung to my eyelashes. I could hear the snowflakes as they hit the ground. It was a soft sound that would have been missed had it been later in the day. The early morning quiet and stillness made this possible. It was the time when even the creatures of the forest were still sleeping. There were no tracks visible in the freshly fallen snow. Only the tracks that were left by my snowshoes. I was completely consumed and alone in my own little world. There was nothing but the beautiful snow and high mountains. I was in the snow globe. Those tall evergreen trees towered high above me. I was but a minuscule dark speck in a world of white.

I stopped snowshoeing and stood still. I found myself wondering if there was a little girl standing just outside the thick round glass above. The lightly falling snow floated down and covered a tiny speck of blue. Was she peering in to see this beautiful world and wishing she could just find that magical door to enter? Was she also hypnotized by the snowfall in that globe? Did she continue to gently shake the snow globe over and over? Did she also dream of that day when she could truly enter that beautiful world of mystery? Would she finally shut out all those worries and troubles and be free to be herself in the stillness?

I found myself wanting to bang on the glass and to shout out to her. I wanted to tell her that yes, there is a magical world free from all those worries and troubles. Tell her to hold on and keep shaking that globe. She should never stop dreaming and that dreams truly do come true. The speck of blue in the middle of the trees knew that to be true.

I could see the little girl’s big green eyes stare into mine. She knew that it was worth the risk to search for her dreams and believe in herself.

Grace Vanderzande is a farmer and the author of Unbuttoned: Our Farming Life in Southeastern Ontario, which will come out in May 2022. She can be reached at buttonsthoughts@gmail.com.