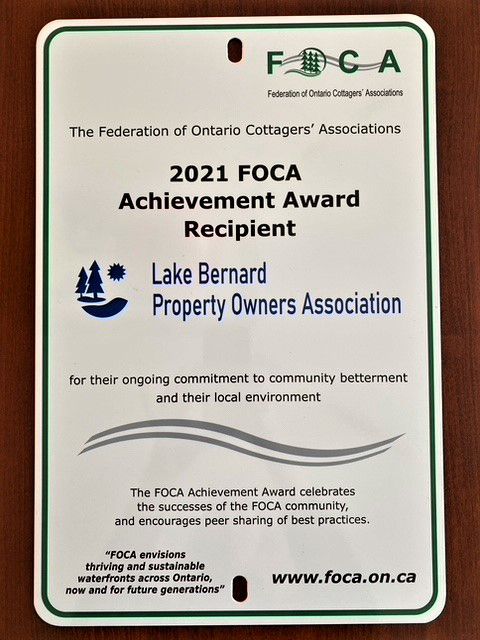 The Lake Bernard Property Owners Association (LBPOA) in Sundridge and the Township of Strong has been recognized by a provincial organization for the work it’s done to protect the health of the lake.

The Federation of Ontario Cottagers’ Association (FOCA) represents more than 500 cottage groups across the province.

Sherrie Berdusco, president of the LBPOA, told municipal councils in Strong and Sundridge FOCA recognized the local group with the 2021 Achievement Award.

Berdusco said each year at its annual general meeting, FOCA announces only one recipient across Ontario to receive the award.

“The LBPOA was recognized for its creation of the roundtable (group) on lake health for Lake Bernard. The roundtable has representation from Sundridge, Township of Strong, the North Bay-Mattawa Conservation Authority, the Almaguin Highlands Chamber of Commerce and the Near North Enviro Education Centre” in Sundridge.

The roundtable was created so the various groups could work together on a shared interest, and undertake initiatives that keep the lake healthy.

Property owners have homes around the lake and take great pride in protecting it.

Berdusco said most recently the local group worked with council to create a septic survey and education piece on what steps property owners need to take to ensure waste from the septic tanks don’t find their way into the water.

Additionally, Sundridge council has been working on a bylaw to ban pesticides along the Lake Bernard shoreline.

Berdusco said the initiatives have proven successful and added FOCA “wanted to highlight the LBPOA as an example for other (cottage) associations.”

“But we could not have done this alone,” Berdusco told Sundridge council.

“It was a collaborative effort.”

Berdusco thanked the council for its support, patience and dedication as it works with the LBPOA and had a very special thank you for Sundridge Mayor Lyle Hall.

“You are a diligent, insightful and committed member of the roundtable and it’s been a pleasure working with you,” Berdusco said.

Berdusco said the FOCA award exemplifies how various groups can work together collaboratively and believes other municipalities will be looking at the Almaguin area to see how they pulled it off.

The award is a metal sign and Berdusco said the local association is going to have a second similar sign made up for both the township and Sundridge.

On where the signs can be displayed, Berdusco suggested putting them up at the local public beach so a large number of people can see what was achieved locally.

FOCA supplies its member associations with data, pamphlets, information and lobbies on their behalf to senior government on issues that affect them.

Berdusco says there is a lot of expertise and insight within FOCA and the local association relies on it a great deal.