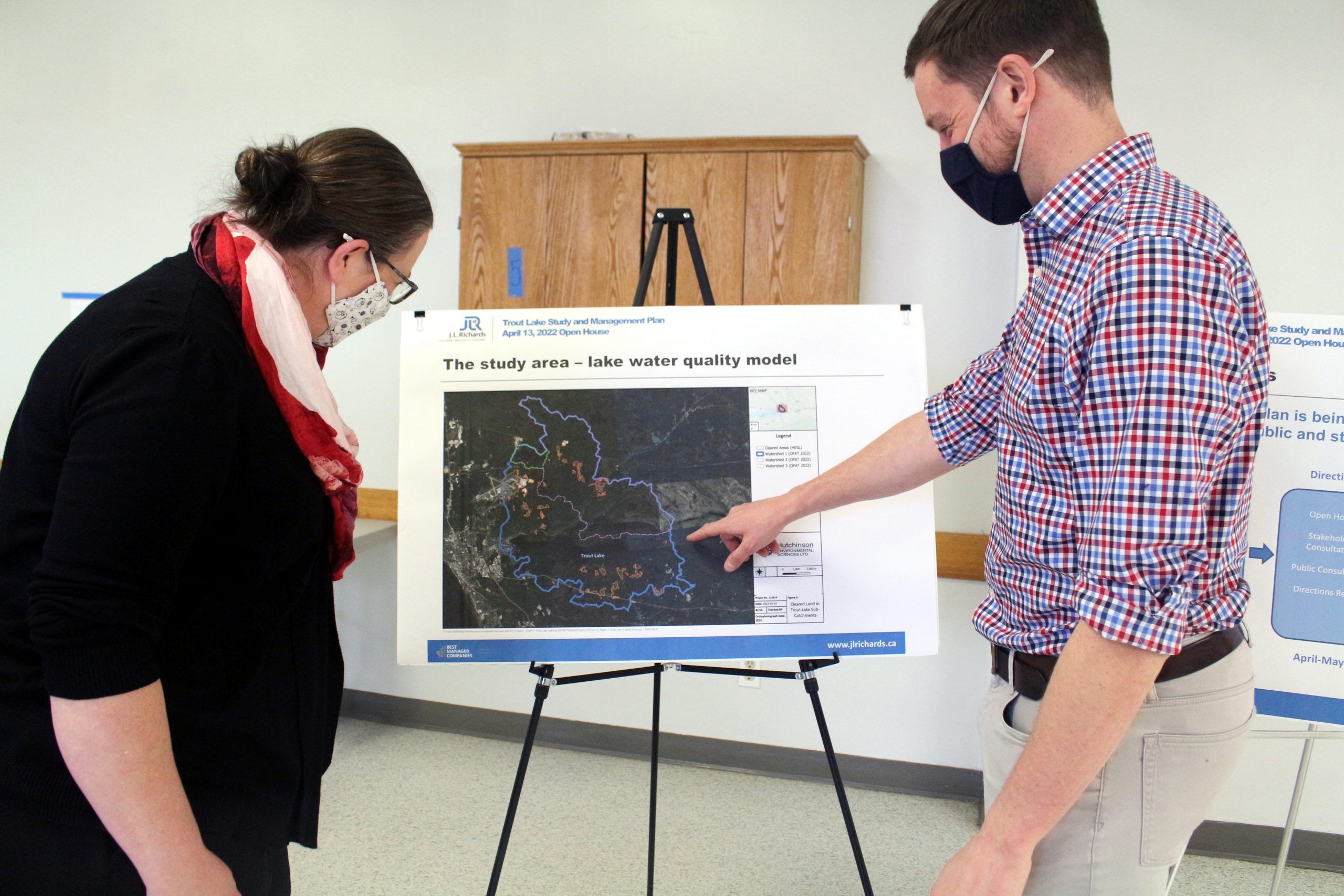 And North Bay and East Ferris are collaborating on a study to make sure it stays that way.

In the first of two public meetings Wednesday to present findings on the lake and seek public input on how to protect the lake, Bev Hillier, manager of planning and building services for North Bay, said the open house gives people a chance to “tell us what they like and what they don’t like, and where they would like to see policies over the long term.”

It’s been a few decades since the city has conducted a study like this on the city’s drinking water supply, and despite development in both North Bay and East Ferris on the lake, “We have discovered the lake is still in good shape,” Hillier said.

“The lake is doing well overall.”

The Trout Lake Watershed Study and Management Plan is being conducted jointly by the City of North Bay, North Bay-Mattawa Conservation Authority (NBMCA) and the Municipality of East Ferris to update and establish policies and provisions to protect and preserve Trout Lake, Four Mile Lake and inflowing streams.

All residents of North Bay and East Ferris were invited to attend the open houses, to ask questions and provide comments about the management of the Trout Lake watershed.

The intent of the Watershed Study and Management Plan is ensure policies and provisions protect the quality of water and visual and aesthetic characters of the watershed and to preserve opportunities for recreational, social and environmental experiences on its waterways.

Hillier said she was pleased with the turnout at the East Ferris presentation, with “a lot of people interested in sharing their perspectives as residents on the lake.”

The open houses Wednesday were the second step in a four-step process which will culminate with the councils of the two communities deciding on further action such as amendments to official plans and zoning bylaws, expected to be put to the councils in July.

A key aim, she said, is “as redevelopment proceeds, we want to make sure to implement the best recommendations and policies” to make sure the lake is protected over the long term.”

Greg Kirton, director of community services for East Ferris, said the study was part of the strategic plan adopted by council when it was elected. Part of the plan identified the need to study and protect the water quality of both Trout Lake and Lake Nosbonsing.

The Lake Nosbonsing study was completed and adopted by council in 2021.

“The two lakes are major resources in the community,” Kirton said. “It was in our vested interest to protect them.”

And while preliminary information determined the quality of Trout Lake is healthy, the goal of this study is to see if the water quality has changed since it was last studied and to “jointly implement policies” to ensure the lake remains healthy.

And while some of those at the East Ferris presentation “expressed general concern” about the health of the water body, “there haven’t been people saying there are specific issues.”

The City of North Bay, the North Bay-Mattawa Conservation Authority (NBMCA) and the Municipality of East Ferris are partnering in the study. The project is split into four separate phases – Understanding, Directions, Planning and Implementation.

Comments can be submitted online at https://www.northbay.ca/projects/trout-lake-study/ where a virtual presentation has also been posted.