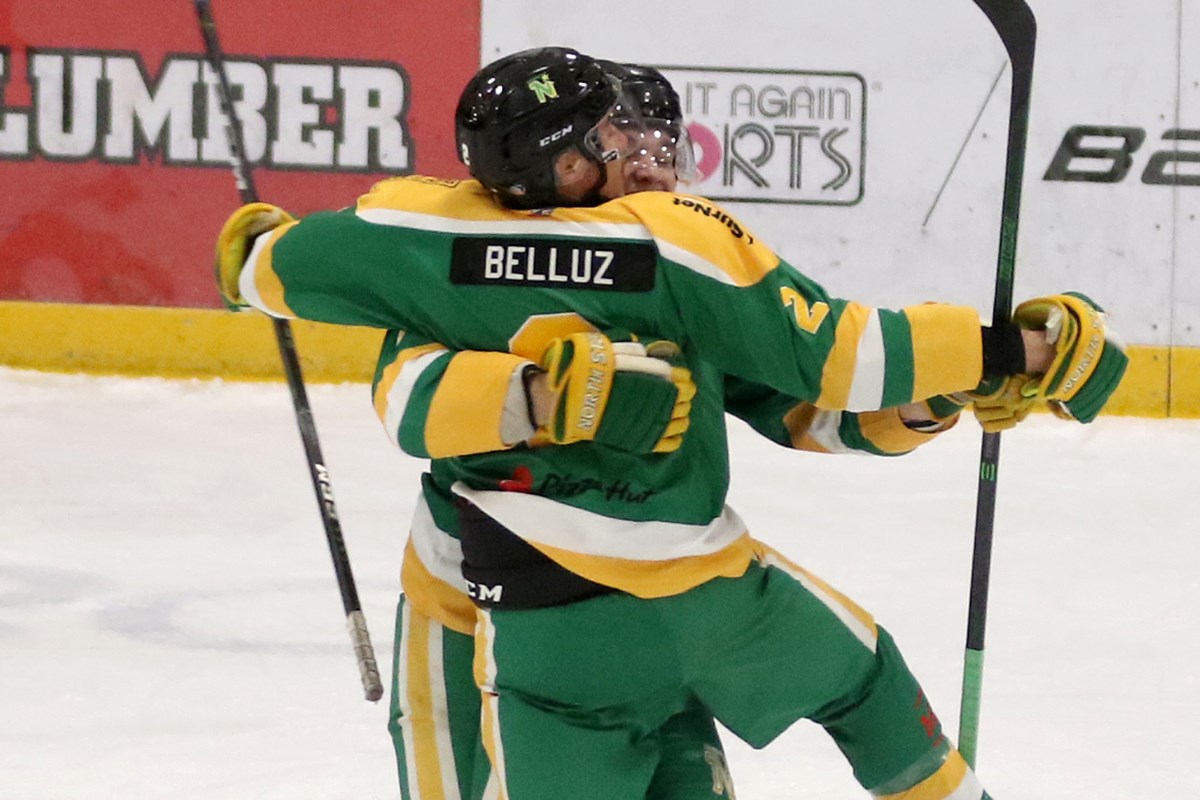 Thunder Bay can close out the best-of-five series on Friday in Spooner, Wisc.

THUNDER BAY – After one period on Wednesday night, the Thunder Bay North Stars had as many goals as the Wisconsin Lumberjacks had shots – five.

It didn’t get much better from there.

Kyler Belluz, who didn’t put a puck past an opposing goaltender in 30 appearances during the regular season, picked an opportune time to snap his goal-scoring slump scoring twice to lead the North Stars to an 8-2 win in Game 2 of their opening-round Superior International Junior Hockey League playoff series.

Thunder Bay now has a commanding 2-0 series lead and can wrap up the best-of-five series Friday night in Spooner, Wisc.

Belluz, who last scored in the 2019-20 campaign, also added two assists for a four-point night and said he’s not sure where the offensive outburst came from.

But he’ll take it.

“It’s not my main focus when I’m out there, scoring goals. I know it’s not my job. I’m just a stay-at-home defenceman. I don’t worry about scoring. I just do my job. But it’s definitely nice to get a couple tonight,” Bellus said.

“The first goal I got a little lucky, the goalie was screened pretty good and it went right in. The second one I jumped into the rush and they didn’t look like they’d seen me. It was a really nice pass from (Edison) Weeks.”

North Stars coach Rob DeGagne didn’t have Belluz scoring two on his playoff BINGO card, but at this time of year, he’ll take the goals anywhere he can get them.

“It was really big,” DeGagne said, noting Belluz was a late arrival for the game, having spent the day working as an apprentice electrician.

“He’s such a good kid and he plays the right way and lives his life the right way. He’s just a super individual, so I’m really, really happy for him.”

Pier-Luc Bellard, who crashed out of Tuesday’s opener after a scary collision with Wisconsin goaltender Kyler Lowden – who earned a one-game suspension as a result – returned in fine form, scoring two of his own.

His left knee looked none the worse for the wear, he and his linemates Edison Weeks and Lou Vesperini combining for four goals and seven assists on the night.

“Everything we did was working. My line was on fire tonight. We’re going to keep this (stuff) going,” said Bellard, who spent the first 10 minutes of the contest in the box, called for a pre-game infraction.

“Speed kills. If we skate and we move the puck and we get to openings and we put the pucks in spots and skate into it, that line is very good because they have speed.”

Jack Eckholm opened the scoring for Wisconsin just 98 seconds after the opening faceoff, but it was all Thunder Bay from there.

The North Stars reeled off seven straight goals, including five in the first period alone, all eight goals on the night allowed by Lumberjacks starter Tyler Swanson, who stopped 36 shots in the lopsided contest.

Weeks, Vesperini,  Zack Davis and captain Hunter Foreshew, who was named the SIJHL’s defensive forward of the year, had the other North Stars goals.

DeGagne said they’re travelling to Spooner for Game 3 with a mindset of closing it out in three, but the North Stars won’t take the Lumberjacks lightly.

“They’re a different team when you play down there, they’ll have a full house and we’ll have to come out and be ready to go,” he said.

North Stars goaltender Jordan Smith, good on 30 of 32 shots, did not return to the ice to start the second, but was back between the pipes by the 8:07 mark. Trennis Riley took over in the interim.