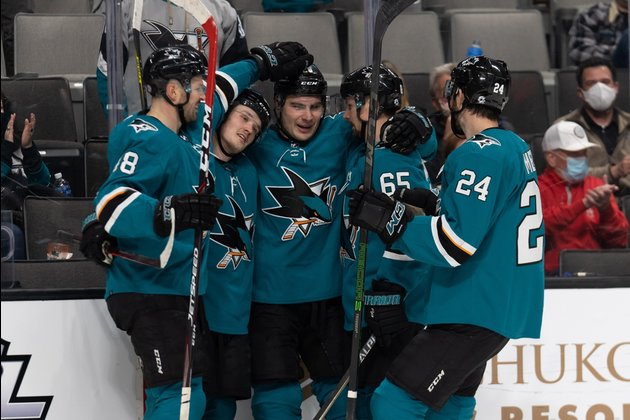 Following a promising stretch, the San Jose Sharks have struggled of late.

Meanwhile, the Washington Capitals’ issues have spanned throughout January.

Each team will look to get back on track Wednesday night when the Capitals aim to continue their series success against the visiting Sharks.Washington closed the 2021 calendar year on a 15-4-3 stretch but is 3-5-2 in the new year. The Capitals have been outscored 33-23 this month with four one-goal losses. They threw 34 shots on goal at home Monday night but were blanked for the first time this season, 1-0 by Vegas.

“I think we’re all mentioning not to get frustrated,” Capitals coach Peter Laviolette said. “I think you get frustrated when you’re not doing the right things.

“Everybody hates losing. Nobody likes the scoreboard and the way it looks right now. And that’s what’s lousy about it. But I think if the guys continue to work and do the right things, eventually they’ll get rewarded.”

Though his seven-game point streak ended Monday, Washington star Alex Ovechkin continued to reward himself on a regular basis. Again among the NHL league leaders with 58 points (29 goals, 29 assists) in 43 games, Ovechkin is closing in on a 16th season with at least 30 goals and sits seven shy of third-place Jaromir Jagr’s 766 on the NHL’s all-time goals list.

Ovechkin recorded 14 of those career goals in 23 games against the Sharks. Two goals and an assist came in Washington’s 4-0 victory at San Jose on Nov. 20.

Ilya Samsonov, 0-2-1 with a 4.09 goals-against average this month, made 22 saves vs. San Jose for his second shutout of the season. Teammate Vitek Vanecek has started the Capitals’ past four games and stopped 48 of 51 shots while going 2-2-0.

San Jose won three straight from Jan. 6-11, but has 10 goals — six in one game — while going 1-3-1 since that run. Looking to avoid a third consecutive defeat, the Sharks also must regroup from a rough 7-1 home loss to Tampa Bay on Saturday. It marked the third time this season that San Jose has allowed at least seven goals.

“It should be a wake-up call,” Sharks forward Andrew Cogliano said. “If (the Lightning) game doesn’t alarm you in terms of how fast you can be out of position, and how fast you can go the other way … you shouldn’t be in the lineup, to be honest with you.”

San Jose’s James Reimer and Adin Hill combined to save just 24 of the 31 shots they faced against Tampa Bay. Reimer has allowed 16 goals on 95 shots against him while going 1-3-0 in January. Hill posted a 2.53 goals-against average in eight January games.

Tomas Hertl and Timo Meier share the Sharks’ lead with 21 goals each. Hertl has five goals and three assists during a four-game road point streak, while Meier has two goals with eight assists in earning at least a point in six straight away from home.

After missing Saturday’s game, Sharks star Erik Karlsson underwent forearm surgery Monday and is expected to be out until mid-March.