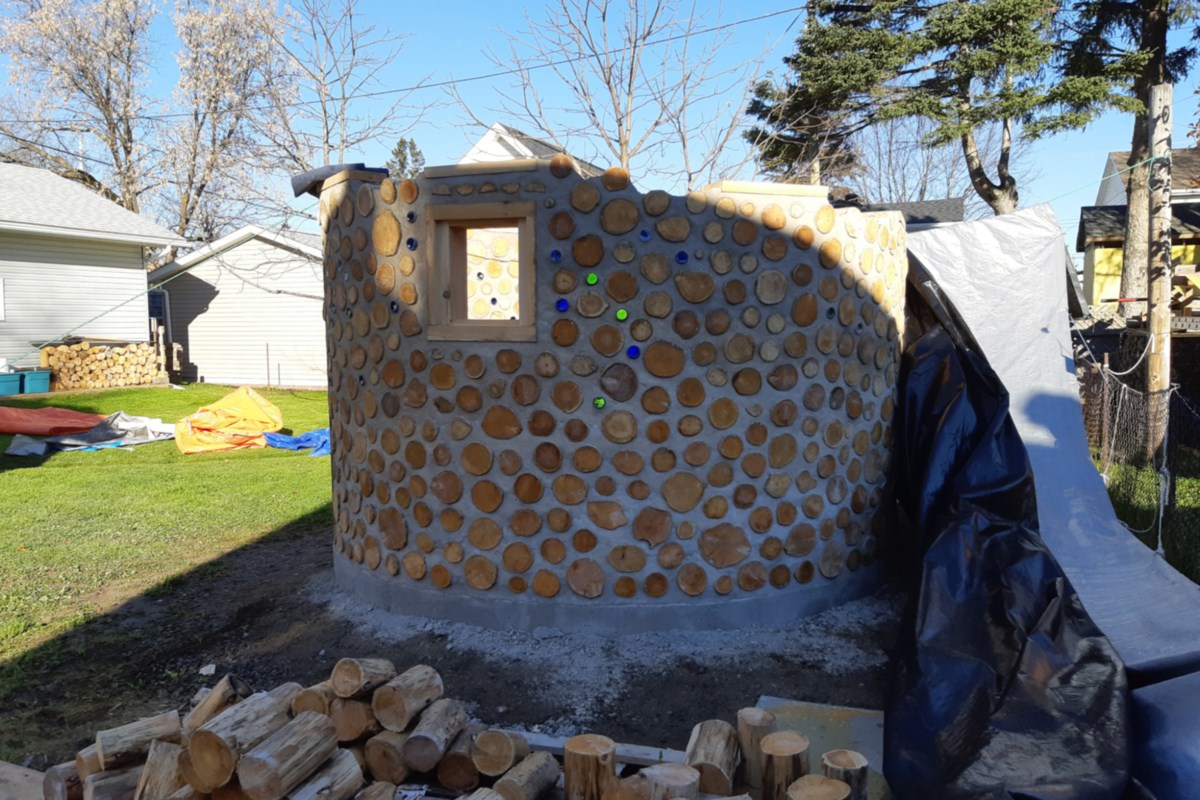 After hundreds of hours of elbow grease, Nick Armstrong’s cordwood sauna is in the running for top spot at international DIY competition

A Sault Ste. Marie man has taken a traditional construction technique used to build barns back in the day and has built something entirely new with it.

Nick Armstrong says he’s logged hundreds of hours over the past year to build himself a backyard sauna that’s entirely handcrafted using cordwood masonry, an old construction method that uses cut logs known as cordwood, and held together with a mix of cement and mortar.

“From my understanding, it was used where there wasn’t necessarily rocks available, so they used sand and old lime mortar to construct the walls versus a traditional rock foundation,” he said.

The idea for the cordwood sauna came to Armstrong after reading a 2020 SooToday article about a family fundraising effort aimed at restoring a historic cordwood barn in Sault Ste. Marie.

“That got me interested in that type of building technique, and ever since there I started researching the building style. I was inspired,” he said.

Armstrong began mapping out his build and sourcing materials around this time last year. He sourced sand, hydrated lime and portland cement from local suppliers in the Sault, and hauled some cedar trees from St. Joseph Island.

He also needed to get his hands on some sawdust in order to complete his old-school mortar recipe.

“You need a very specific type of sawdust consistency and it has to be a softwood sawdust, so I sourced some sawdust from some of the local Mennonites down in the Desbarats area,” Armstrong said.

He would end up going to beer and liquor stores in order to get the coloured glass for the walls, which entailed cutting bottles in half and fusing them together.

“I didn’t shop for what I wanted to consume, I shopped by the colour of the bottle,” said Armstrong. “You’ll see a lot of blue bottles, and that’s actually a French beer – I never would’ve tried that beer if it was in a blue bottle, I wouldn’t have picked it otherwise,” he said.

The roof will also have its own unique qualities once complete.

“The roof itself is actually going to be an earth roof, so it’ll be a live roof with grass and flowers and whatnot planted on top,” Armstrong said.

To put it in perspective, Armstrong says, the total cost of his cordwood sauna wouldn’t cost as much as a comparable sauna kit. But the labour was intensive, with Armstrong spending many a night under a tarp in his backyard with a headlamp strapped to him.

“Labour is the highest cost of the project.”

Armstrong’s cordwood sauna has been entered into DIY Hero, an international competition with a grand prize of $25,000 and the opportunity to be featured in a two-page advertorial in Make Magazine.

“I’d love to get the word out there. It’s been a lot of fun. It’s been a long, challenging, rewarding project, and I think it’s cool to show people what’s possible if you just put some elbow grease and time into something,” said Armstrong. “I think it would be pretty cool for someone from Sault Ste. Marie to be recognized in one of these global competitions.”

Votes for Armstrong’s cordwood sauna can be placed at the DIY Hero website.