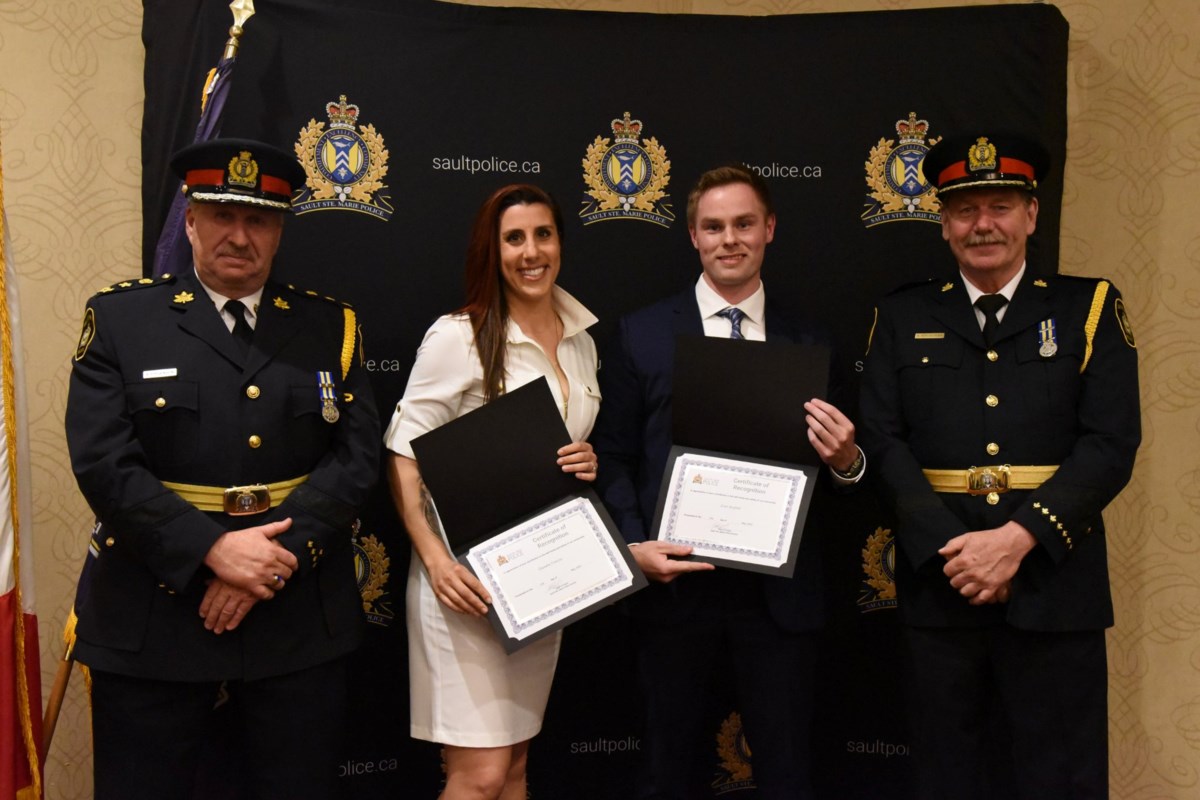 The Sault Ste. Marie Police Service recognized a number of citizens, organizations, and schools for their significant contributions to public safety.

Commendations were awarded to the following citizens for their contributions to the wellbeing and safety of our community:

In 2019, off duty officer Steven Peltsch was at the Shell gas station on Great Northern Road when he noticed a running vehicle had its back tailgate open and a hose was attached to the tail pipe, running inside the vehicle. He removed the hose from the exhaust pipe and saw a man and woman in the vehicle. The man told him they wanted to die, and the woman appeared unresponsive. Cst. Peltsch was able to remove the woman from the vehicle and began administering CPR as she was unconscious. Mr. Ramsay was in the area, saw what was happening and quickly called 911 and helped Cst. Peltsch in restraining the man until first responders could arrive.

In 2019, 13-year-old Nathan Lambert was babysitting his younger brother and sister for the first time. His parents went to the store for a short time to give Nathan some additional responsibility. While watching his younger siblings, Nathan had called 911 and told dispatch he had heard a large bang followed by smaller ones. Nathan went upstairs into his parents’ room with his siblings. Once officers arrived at the residence, it was confirmed someone had broken into the basement door and was inside the house but fled prior to police arrival. The suspect had left behind a replica handgun.

In 2020, Sault Police attended the YMCA to speak with a young person complaining of being abused by their father. The young person did not speak English and speaks Arabic. Ihan Almomani’s name came forward as a person that could assist in translating. On her own time, Ihsan attended the station and spoke to this young person and their family in great length. A safe place was found for this young person, and Ihsan provided the family with information to help them better understand the situation.

The daughter of Sault Constable Fred Brown, Crystal has volunteered her time in support of charitable organizations. One of her biggest contributions is with Project Blue Light, a service to honour fallen officers who have died in the line of duty and support current officers protecting their communities.

In 2021, Paramedics Scott Benford and Deandra Franzisi were dispatched to the Fort Creek Conservation Area where they discovered a young woman sitting atop a bridge contemplating suicide. Their compassion and expertise calmed her, but not enough to get her to come off the bridge. Sault Police officers arrived on the scene and pulled her off the bridge.

Speck began using illicit drugs when she was 14. Her drug use escalated and continued for 5 more years. She entered rehab and began the journey toward sobriety. Her journey continues, and through dedication and hard work, Shelby has been sober for 6 years.

In 2020, Sam Petingola and his wife were shopping in the Station Mall when three masked suspects, armed with an axe and a sledgehammer, smashed a glass case at a jewellery store. Mr. Petingola jumped into action, tackling one of the suspects who was armed with a sledgehammer and restrained him until police could arrive.

Police Service plaques were awarded to the following community members:

Mike and Sue Flammia at Little Caesars Pizza, for their compassion and generosity by providing pizzas to community centres in need of food.

LCBO Managers Serge Sylvestre, Dean Wade and Shelly Bailey, for the effort and cooperation by all three locations to improve efficiency and assistance for calls for service.

HOPE Alliance’s Taylar Piazza, for her continued and tireless effort in supporting the victims and survivors of human trafficking and sexual exploitation.

Sault Ste. Marie Helping Hands founder Wendy Gutcher, for her commitment in collecting, organizing, and distributing donated household items, clothing and other gently used items to those in need in our community.

Four local schools who have a long history of being accident-free also received a plaque: