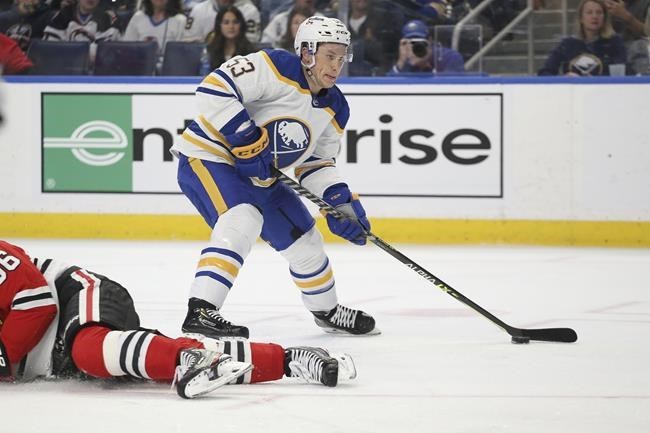 BUFFALO, N.Y. (AP) — The airing of grievances and expressions of frustrations which commonly followed each of the Sabres’ previous 10 losing seasons were notably absent on Saturday.

BUFFALO, N.Y. (AP) — The airing of grievances and expressions of frustrations which commonly followed each of the Sabres’ previous 10 losing seasons were notably absent on Saturday.

At a time Buffalo set an NHL record by missing the playoffs for an 11th straight year, the mood was unmistakably upbeat among players gathering one final time.

“Usually in the morning you’re trying to gather thoughts of all the complaints, the issues that are going on,” he added. “This morning, my wife asked me, `What are you going to say?′ And I said, `I don’t have too many complaints.′ It’s weird.”

A palpable sense of optimism might finally be taking root on a team that showed distinct signs of gelling following a year of upheaval and overhaul.

With a focus on rebuilding through youth and targeting players who wanted to stay in Buffalo, general manager Kevyn Adams’ purge began with forward Sam Reinhart and defenseman Rasmus Ristolainen being dealt in separate trades last summer. The process was capped in November when Buffalo ended its lengthy stalemate with Jack Eichel by trading the ex-captain to Vegas.

“Looking back to what we started the first day of training camp, I think everybody can be proud of where we are,” Kyle Okposo said. “If you look at expectations from the outside, I think we probably exceeded what they were. Internally, we really didn’t set any expectations as far as wins and loses. it was just, `We’re going to win the day.’ ”

With much of the roster returning intact, Jeff Skinner believes the foundation of a culture is in place.

“I think there’s cause to be excited and be encouraged, but its up to us now to take that next step,” Skinner said.

Missing on Saturday were the headline-grabbing comments made during previous exit-meeting interview sessions. There was the time four years ago when Ryan O’Reilly suggested the Sabres had a losing culture. Eichel’s frustrations spilled over during each of the previous two offseasons, capped by him questioning his future with the franchise a year ago.

Perhaps, Girgensons said, both the Sabres and the departing players needed to move on.

“Sometimes that is the way it works. Maybe they needed a fresh start and we needed some fresh faces in here,” Girgensons said. “I think it worked out this year. All of the guys we got, there’s no complaints. I loved every single guy in the room.”

Numerous Sabres had career seasons. Tage Thompson, who began the year with 18 goals in his first 104 NHL games, scored a team-leading 38 times in 78 outings. Rasmus Dahlin’s career-best 53 points were the most by a Sabres defenseman since Garry Galley had 54 in 1995-96. And Owen Power, t he No. 1 pick in last year’s draft, scored twice in eight games after leaving the University of Michigan.

Anderson, who turns 41 next month, is split between retiring and being open to re-signing with Buffalo based on how much he enjoyed his first season with the Sabres.

“The mind says, absolutely, I would love to be with these guys and that says a lot as far as the group of guys and the management and staff,” Anderson said. “If I was five years younger, that would be the ideal situation.”