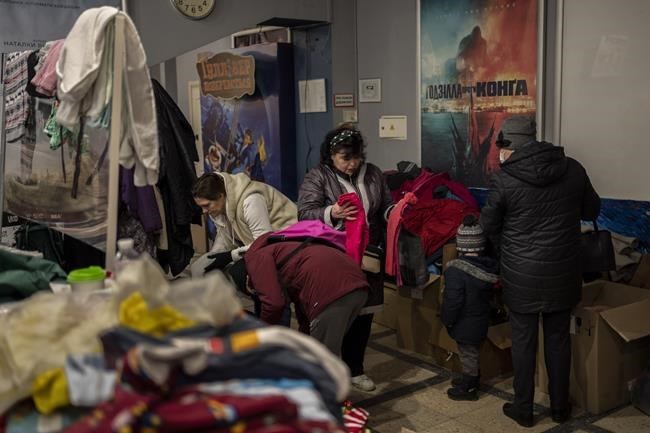 More than 30 Russian cruise missiles targeted the sprawling training facility that is less than 25 kilometers (15 miles) from the closest border point with Poland, according to the governor of Ukraine’s western Lviv region. Poland is a transit route for Western military aid to Ukraine, and the United States increased the number of America troops deployed there.

The training center near Yavoriv appears to be the westernmost target struck during Russia’s 18-day invasion. The facility, also known as the International Peacekeeping and Security Center, has long been used to train Ukrainian military personnel, often with instructors from the U.S. and other NATO countries.

It has also hosted international NATO drills. As such, the site symbolizes a longstanding Russian complaint: that the 30-member Western military alliance has expanded in Eastern Europe too close to Russian territory. One of Moscow’s stated conditions for ending the hostilities in Ukraine is for the country to drop its ambitions to join NATO.

Lviv governor Maksym Kozytskyi said most of the Russian missiles fired Sunday “were shot down because the air defense system worked.” The ones that got through through killed at least 35 people and wounded 134, he said.

NATO said Sunday that it currently does not have any personnel in Ukraine. A NATO official didn’t respond to questions about when the alliance last had personnel at the training base.

The city of Lviv itself so far has been spared the scale of destruction unfolding to its east and south. Its population of 721,000 has swelled during the war with residents escaping other bombarded population centers and as a waystation for the nearly 2.6 million refugees who fled the country.

Ukrainian and European leaders have pushed with limited success for Russia to grant safe passage to civilians trapped by fighting. Ukrainian authorities said more than 10 humanitarian corridors would open Sunday, with agreement from Russia, including from the battered and besieged port city of Mariupol, where authorities say more than 1,500 people have been killed.

Ukrainian President Volodymyr Zelenskyy said in a video address that a convoy carrying 100 tons of humanitarian aid was on its way to Mariupol, and all necessary diplomatic efforts have been taken to make sure it reaches those in need. Capturing Mariupol and other ports on the Azov Sea could allow Russia to establish a land corridor to Crimea, which Russia seized from Ukraine in 2014.

But continued fighting on multiple fronts heaped further misery on the country Sunday.

In the southern city of Mykolaiv, near the Black Sea, authorities reported nine more people killed in bombings. Russian forces advancing from Crimea were attempting to circumvent Mykolaiv on what appeared to be a westward push toward the Black Sea port of Odesa, Britain’s Defense Ministry said.

Russian fighters also fired at the airport in the western city of Ivano-Frankivsk, which is less than 150 kilometers (94 miles) north of Romania and 250 kilometers (155 miles) from Hungary, countries that also are NATO allies. The airport, which includes a military airfield as well as a runway for civilian flights, also was targeted Friday.

Ukrainian authorities said Russian airstrikes on a monastery and a children’s resort in the eastern Donetsk region hit spots where monks and refugees were sheltering, wounding 32 people.

Another airstrike hit a westward-bound train evacuating people from the east, killing one person and injuring another, Donetsk’s chief regional administrator said.

To the north, in the city of Chernihiv, one person was killed and another injured in a Russian airstrike that destroyed a residential block, emergency services said.

Around the capital, Kyiv, a major political and strategic target for the invasion, fighting also intensified, with overnight shelling in the northwestern suburbs and a missile strike Sunday that destroyed a warehouse to the east.

In Irpin, a suburb about 12 miles (20 kilometers) northwest of central Kyiv, bodies lay out in the open Saturday on streets and in a park.

“When I woke up in the morning, everything was covered in smoke, everything was dark. We don’t know who is shooting and where,” resident Serhy Protsenko said as he walked through his neighborhood. Explosions sounded in the distance. “We don’t have any radio or information.”

He vowed that any all-out assault would meet stiff resistance, saying: “We’re getting ready to defend Kyiv, and we’re prepared to fight for ourselves.”

After talks aimed at reaching a cease-fire again failed Saturday, the U.S. announced plans to provide another $200 million to Ukraine for weapons. Russian Deputy Foreign Minister Sergei Ryabkov warned other nations that sending equipment to bolster Ukraine’s military was “an action that makes those convoys legitimate targets.”

Zelenskyy has accused Russia of trying to break his country apart, as well as starting “a new stage of terror” with the alleged detention of a mayor from a city west of Mariupol. He also alleged Saturday that Russians were using blackmail and bribery in an attempt to force local officials in the southern Kherson region to form a “pseudo-republic” like those in the two eastern regions where pro-Russian separatists began fighting Ukrainian forces in 2014.

“Ukraine will stand this test. We need time and strength to break the war machine that has come to our land,” Zelenskyy said during his nightly address to the nation Saturday.

Zelenskyy again deplored NATO’s refusal to declare a no-fly zone over Ukraine and said Ukraine has sought ways to procure air defense assets, though he didn’t elaborate. NATO has said that imposing a no-fly zone could lead to a wider war with Russia. U.S. President Joe Biden announced another $200 million in aid to Ukraine, with an additional $13 billion included in a bill that has passed the House and should pass the Senate within days.

Russian forces have hit at least two dozen hospitals and medical facilities, according to the World Health Organization. Ukraine’s Prosecutor General’s office said Sunday that at least 85 children have been killed in the Russian offensive and more than 100 wounded. completely destroyed.

The United Nations has said the fighting has displaced millions of Ukrainians within the country on top of the millions who have left.

Elena Yurchuk, a nurse from the northern city of Chernihiv, was in a Romanian train station Saturday with her teenage son, Nikita, unsure whether their home was still standing.

“We have nowhere to go back to,” said Yurchuk, 44, a widow who hopes to find work in Germany. “Nothing left.”

Associated Press journalist Mstyslav Chernov in Mariupol and other reporters around the world contributed.

Follow the AP’s coverage of the Ukraine crisis at https://apnews.com/hub/russia-ukraine