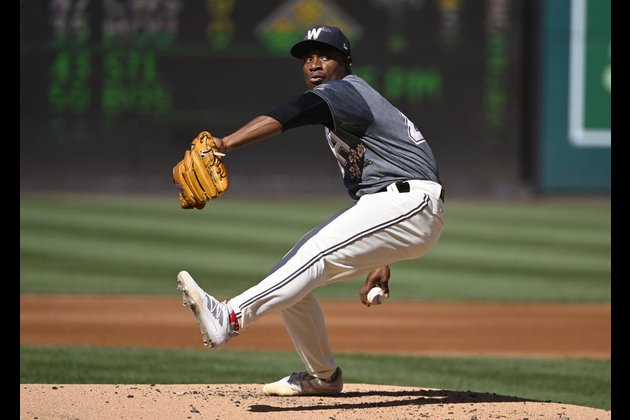 Rhys Hopkins singled home Matt Vierling with the go-ahead run in the 10th inning and the Philadelphia Phillies ended Ryan Zimmerman’s special day with a 2-1 win over the Washington Nationals on Saturday.

Before the game the Nationals held a ceremony retiring the No. 11 worn by Zimmerman, who spent his entire 16-year career with Washington.

Pinch hitter Hopkins opened the 10th with a ground-ball single to center off Reed Garrett (0-1), scoring Vierling from second to make it 2-1.

After Kyle Schwarber walked, Didi Gregorious singled to load the bases, but Andres Machado came to face Nick Castellanos, whose grounder forced Hopkins at the plate. J.T. Realmuto then popped out and Odubel Herrera flied to left.

Brad Hand (2-1), who blew the save in the ninth, got the win and Seranthony Dominguez pitched a 1-2-3 tenth for his first save.

Gregorius had two hits for the Phillies, who have won five straight and 15 of their last 17.

Juan Soto singled and walked twice for Washington, which has lost eight straight.

Soto opened the ninth with a walk against Hand and moved to second when Nelson Cruz grounded out. Josh Bell flied to center, but Lane Thomas lined a single to right and Soto beat the throw home from Vierling to tie it 1-1.

Yairo Munoz homered in the seventh to give Philadelphia a 1-0 lead.

Aaron Nola was dominant, limiting Washington to four singles and a walk while striking out eight over eight innings and 106 pitches. He has gone seven or more innings in his past three starts, allowing just two runs in 23 innings.

Nola had gone 34 2/3 innings and 133 batters without issuing a free pass before an intentional walk to Soto in the sixth.

Washington got a stellar effort from starter Josiah Gray, who tossed six shutout innings. He allowed one hit and three walks while striking out four.