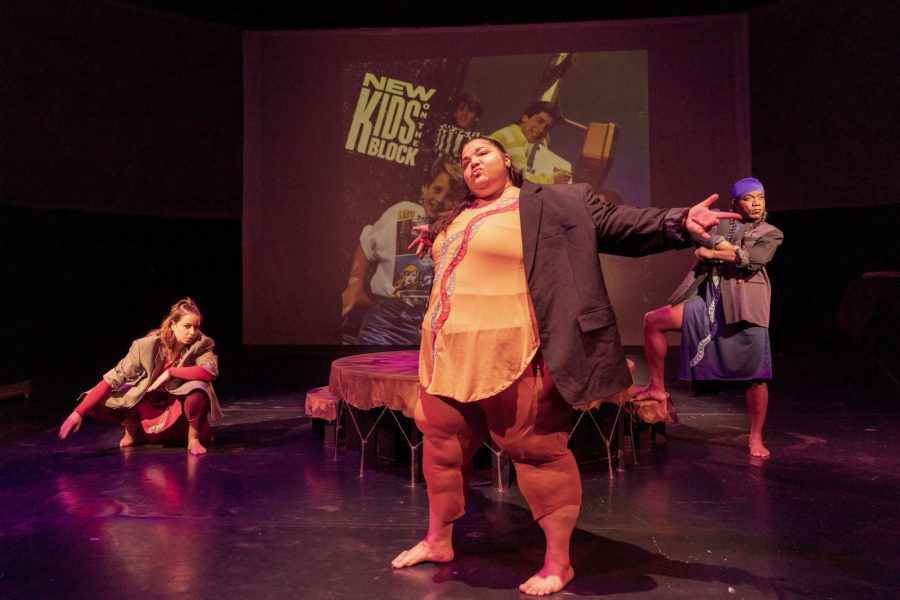 There’s a moment early on in Yolanda Bonnell’s bold and brilliant new play when the character she plays, Miskozi, is swept up in a storm and, Wizard Of Oz style, watches several things swirl about her: the $20 bill Queen Elizabeth II portrait looks down at her, eyes flashing angrily; a Hudson Bay blanket flies around; and Justin Trudeau rides a broomstick, like the Wicked Witch of the West.

Toto, I have a feeling we’re not in the Kansas of white, settler coming-of-age stories anymore.

Welcome to White Girls In Moccasins, a refreshing Indigenous take on the format. It’s a story in which, instead of taking a pair of ruby slippers, Miskozi is asked to hand over her cherished moccasins. And that sets in motion a journey to reclaim an identity that’s been seized from her. To go home, as it were.

Home, for Miskozi, is both a physical place – on and off a rez in Northern Ontario – and, more importantly, a cultural one. In an ingenious narrative stroke, Bonnell has decided to add two characters to Miskozi’s journey: her inner white girl, Waabishkizi (Elizabeth Staples), and Ziibi (Ravyn Wngz), Miskozi’s ancestral river.

Waabishkizi is both her friend and nemesis. Miskozi identifies with her – all popular culture seems targeted to white people, after all – but soon realizes they’re very different. When they’re kids playing Disney’s The Little Mermaid, Waabishkizi bossily demands she play Ariel rather than sidekick Flounder, and, later on in school, she’s the one who gets cast as Dorothy, while her equally talented brown friend is cast as another creature dancing down the yellow brick road. And, in a recurring segment inspired by game show Wheel Of Fortune – satirically called Wheel Of Privilege – Waabishkizi plays a smiling Vanna White to Miskozi’s eager contestant.

Meanwhile, Wngz’s Ziibi fluidly transforms into even more characters, like a culturally insensitive game show host (there’s a repeated gag where Ziibi can’t pronounce Miskozi’s name) and a serious TV anchor who, throughout Miskozi’s childhood, reports on a series of disturbing stories affecting Indigenous people. In one of the show’s most powerful moments, Wngz plays a policeman interrogating Miskozi/Waabishkizi and showing extreme racial and cultural bias.

All of this might seem like a lot to present in a 100-minute play, but Bonnell is aided by a superb production team, headed by Cole Alvis and Samantha Brown (directors) and including Trevor Schwellnus (set and projection designs), Maddie Bautista (composer and sound designer), Echo Zhou (lighting), Rachel Forbes (costumes) and Rihkee Strapp (animation). Bonnell herself, besides her nuanced performance and poetic, often very funny script, contributes choreography that also enhances the story.

Of all the productions I’ve seen in the staggered theatre reopenings during the pandemic, this is the show that has best understood the possibilities and the potential of the art form. This is theatre as ceremony, as ritual. The efficiency and ease with which the creative team fill in Miskozi’s story are impressive, whether it’s presenting the young girl watch her Gramma bake (that white flour becomes very symbolic) or seeing her witness abuse and then enter abusive relationships herself.

Even the centrepiece of Schwellnus’s set – a large, raised drum – contributes to the play’s suggestiveness, since we’re essentially watching Miskozi’s circular journey back to her lost self. And the waterway motif in Forbes’s costumes is quietly symbolic.

Bonnell, so powerful in her solo show bug and the revival of The Crackwalker, demonstrates an enormous range of lived-in experience, often expressing in movement what words can’t articulate. Wngz, although her diction is sometimes muffled, transforms into dozens of human and inanimate characters with startling ease and fluidity; and Staples presents a game and spontaneous counterpart to Miskozi.

While most of the live and in-person performances are sold out, try getting a ticket, or at least watching the online version – the recording of a live performance. Even in a normal theatre year, this would be one of the standout shows of the season.