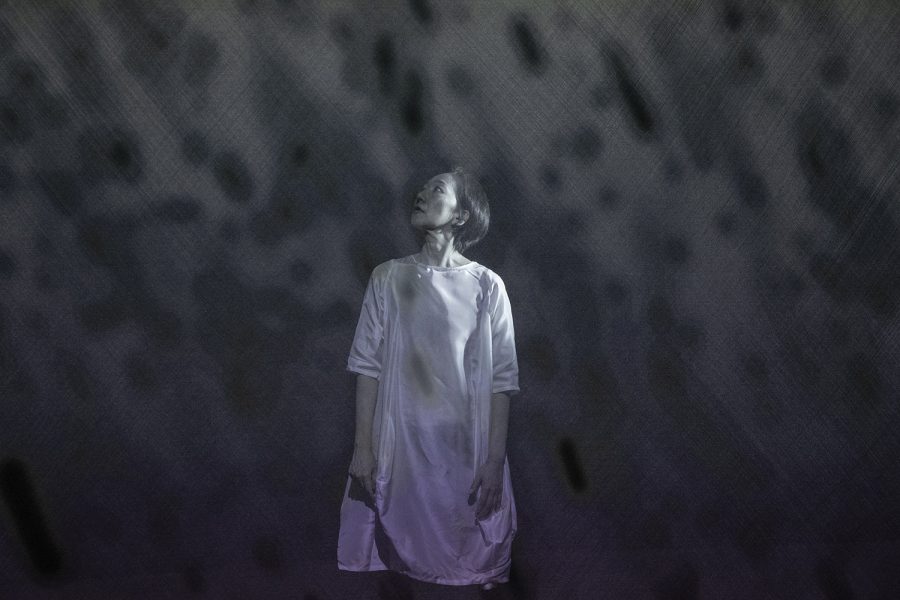 The horrific effects of the atomic bomb on the Japanese have been chronicled in countless ways since August 1945. Now Theatre Passe Muraille’s #BeyondTO Festival lets audiences understand and experience the atrocity from a unique perspective: that of Deaf survivors.

Chisato Minamimura’s Scored In Silence is being marketed as “a solo immersive performance,” and indeed it’s delivered in a fascinating presentation style. Deaf artist Minamimura, clad in a simple white smock, performs behind a screen upon which are projected various images – everything from maps of the countries involved in the second world war to an animated depiction of the plane that eventually drops the first bomb on Hiroshima. (Animation is by Dave Packer.)

Minamimura occasionally interacts with the images; one moment, she’s a cockpit piloting the plane; in another she’s a worker in a rice paddy, pausing to shade her eyes and look up at the strange aircraft in the sky. Minamimura is a beautifully expressive performer, using dance, movement and signing to tell the story. The result is strangely hypnotic – not quite traditional theatre/dance, but not film, either.

Things are enhanced further by the use of something called a Woojer Strap, which audiences can elect to wear around their bodies. At key moments – the starting of plane engines, for instance, and of course the dropping of the A-bomb – the device vibrates and rumbles, suggesting a bit of what deaf people might experience. Interestingly, sometimes the device (Danny Bright is sonic artist) rumbles not to indicate sound but to express a sense of foreboding.

Minamimura has integrated videotaped interviews with several Deaf survivors of the bombs. These contain the most harrowing and affecting details, not just about the confusion and terror deaf people felt during the event – unlike their hearing counterparts, they couldn’t get information by word-of-mouth or radio reports – but the alienation and ostracization they felt afterwards. Deaf survivors were doubly stigmatized because of their disability and the fact that they were perceived as tainted because of the bomb. One interview subject didn’t fully realize what had happened until they viewed the Hiroshima Peace Memorial nearly a decade later.

One of the most powerful moments occurs when we hear the story about a deaf barber who wanted to expand his business but was continually rejected for a bank loan – his disappointment evoked by the image of an enormous hand pounding down on Minamimura.

Today, nuclear arms devices continue to proliferate around the world, edging us closer to an even more horrific tragedy. Scored In Silence is a humane, inclusive and moving look at some of the personal costs of such destruction.