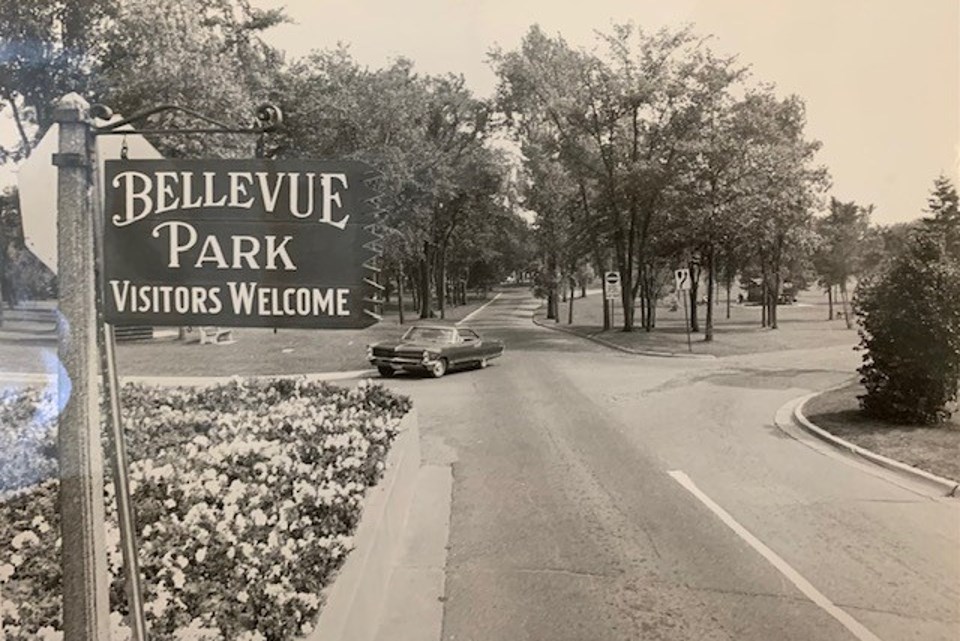 Doesn’t every child love a park? With plenty of space to run and play, perfectly manicured grounds and lots of playground equipment, it would be a child’s dream.

For most children, going to the park every day isn’t a reality, but for a select few, this might actually be the case. And so it was for Bonnie and her younger siblings, Richard and Brenda.

At one time, there was a family that lived in Bellevue Park in the ‘white house’ that stood in the Southeast section of the Sault‘s biggest park. The family who made Bellevue Park their home were the Hanlans.

Hugh Hanlan had been honourably discharged from the Second World War because of poor eyesight. Due to the demand in Canada for Police Officers, he joined the OPP and secured employment in Sault Ste. Marie, Ontario.

In April of 1944, Mr. Hanlan was appointed as the park’s new superintendent. J. H. Hanlan took the position after Mr. Louis Barge, a faithful servant of the city, passed away at the age of 74.

For his new position, he brought excellent qualifications having studied Horticulture at the Agricultural College in Guelph and landscape gardening experience from the Dominion Experimental Farm at Kapuskasing.

Their daughter Bonnie recalls meeting Mr. Penhorwood and remembers him as a tall, dignified-looking man.

With his wife Elva and their daughter Bonnie, the Hanlan family moved into the house situated in Bellevue Park.

The ‘White House’ where the family lived held a history of its own. Originally built by F.J. Davey for his new bride, it was moved from its original location on Pim Street in 1913. Interestingly, Bonnie had learned this piece of information from Mr. Davey when one day he was walking by, admiring the house, he stopped to share its history with her.

From 1943 to 1971, Elva and Hugh along with their children called Bellevue Park their home. Mr. and Mrs. Hanlan were busy as they raised their children and dealt with numerous issues that came their way within the park.

It’s clear in speaking with the Hanlan children that each one holds many fond childhood memories of Bellevue Park. This was an unusually delightful childhood and it is a rare person who can share the same sentiments but the Hanlan children, who are now seniors, sure can!

Throughout the summers at Bellevue Park, day camps for children were held.

A summer student coordinator was hired and each morning children from the surrounding homes would come to take part in the fun activities planned for the day. Whether it was playground activities, games with one another or crafting, the Hanlan kids always had others to play with throughout the summer months.

Times were different then. Bonnie expressed that it was a different time, a safer time, when kids could be out on their own to play until the sun went down.

Antics that went on at the park often had to do with the animals that were housed at the small Zoo.

Many Saultites too will remember the variety of animals that were housed there. Timberwolves, bobcats, pheasants, raccoons, a snowy owl, sea otters, deer, bison, peacocks, beavers and who can forget the black bears and their cubs!

Some might have thought that the animals stayed in their cages once brought to the Bellevue Park Zoo but this was not always the case according to Bonnie. Stories of the animals bring back entertaining memories for her.

One afternoon, the big black bear escaped from his cage and climbed the tree beside the otter cage. One of the park employees ran to the white house for help where Mrs. Hanlan gave him a pail of honey. Luckily the employee was able to coax the bear back down the tree and into his enclosure.

Bonnie also recalls her mother bottle-feeding fawns with a Coca-Cola bottle that had a nipple taped on. The fawns were often brought to the house by people who suspected them to be orphaned babies. Sadly the effort to nourish them was often met without a successful outcome.

Who can forget Jynx the Lynx? She was brought to city hall for a photo shoot for a fundraiser to help raise awareness about the city’s newest piece of medical equipment, the CAT scan. Jynx had her moment of fame as she posed for pictures with Doctor Walde and local politicians.

One of Richard Hanlan’s most memorable recollections was when the bison arrived from Elk Island National Park near Edmonton.

Arriving in wooden crates, the plan was for Mr. Hanlan and Richard to try and keep them calm by releasing them at the same time.

After giving the bison time to settle down, it was time to release them into their new surroundings. Hugh stood atop the male’s crate and Richard atop the female’s crate. The release did not go well or as expected. When pulling the gates up, the gate on the male’s crate got stuck, the bison became frantic and smashed his way out leaving Mr. Hanlan and his son to jump off the crates and run as fast as they could out the bison enclosure!

Growing up in the city’s prettiest park also brought back other memories of visits from dignitaries and celebrities like the Hargreave quadruplets. As Sault Ste. Marie’s special little girls, they had been invited to present the Queen with a bouquet of flowers at her royal visit to Sault Ste. Marie with Prince Phillip.

Weekend weddings were a usual occurrence too as brides, grooms and wedding parties posed in front of the well-known wooden wagon that was full of beautiful flowers carefully planted by park staff.

The grass, too, was perfectly manicured by Jack Rhodes (father of John Rhodes). For many years he was employed at the park and helped direct the many summer students.

Not only do the Hanlan children have their memories of growing up in Bellevue Park but in a sense, so do thousands of other children who grew up in Sault Ste. Marie.

Whether it was a family picnic, an afternoon at the playground or a visit to see the variety of animals that were once at the park, almost everyone has a childhood memory that they can think back on.

Bellevue Park has maintained its attraction over the years. However, there is no longer a superintendent or a family living within the park. Many city employees have a hand in keeping the park beautifully maintained. The Rotary Club of Sault Ste. Marie Adventure Playground is also located in the park as well as the Bellevue Park Interactive Outdoor Sensory Playground which opened on July 19, 2016 – the first of its kind available to our community.

The Bellevue Park Splash Pad is a more recent addition to the park. Paved walkways that swirl throughout the park, beautiful flowers, sprawling trees, and lots of space for adults and children to play, keep Bellevue Park a wonderful place to make memories with friends and family alike.