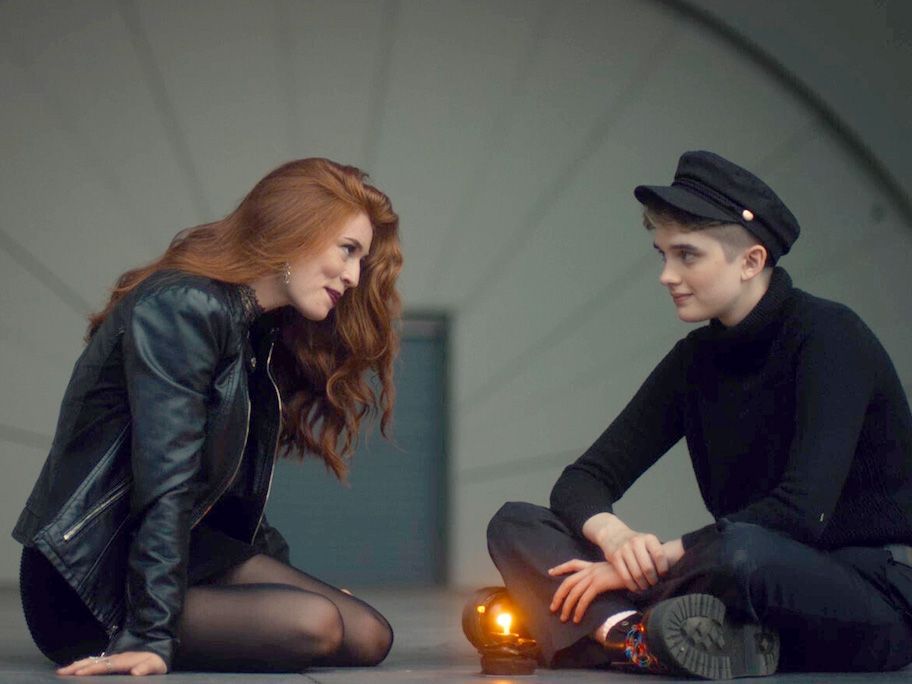 The opener of this year’s Reelout Queer Film Festival will have a decidedly local appeal.

One of the stars of Jude Klassen’s a “Stupid for You,” which premieres opening day Thursday any time after 7 p.m., is Wolfe Island’s Caylin Turner.

The music-driven film, which is set in Toronto, is about musician Dani Destroyer (June Klassen) and her daughter, Kat (Mikhael Klassen-Klay), who are both “in search of love in the face of gut-wrenching angst,” according to the plot synopsis. The 19-year-old Turner plays Eden, who’s the object of affection/antagonist of Kat.

Eden isn’t the most innocent character, Turner hinted, and it’s a role she relished because of that.

“I love playing evil characters,” she explained Tuesday over the phone from Vancouver, where she’s attending school. “I think there’s something really interesting and unique about them (because) there are so many layers to them.”

Turner — who was asked to audition by the film’s producers, the Butler brothers, with whom she’d performed in a previous feature — said she wouldn’t divulge much about her character’s duplicitous ways. That might be in part because she hasn’t seen the final cut of the film yet, so Thursday’s premiere will be her first time watching it in its entirety.

Like most films shot during the pandemic, “Stupid for You” took a lot longer to shoot than expected.

“As soon as we started the project, I think it was about a week or two in, is when COVID officially hit,” Turner said, adding that what was supposed to take about a month to shoot took almost a year and a half.

While “Stupid for You” is her current feature, it isn’t the first in which the 2020 Regiopolis-Notre Dame Catholic High School grad has starred. The first was the independent feature “This was America,” in which she played a daughter on the run with her father. She also landed a role in the Harlequin-based Christmas movie “Baby in a Manger,” in which she played a young mother.

Her love of acting, she said, started when she was still in public school — “I was kind of a dramatic child,” she laughed — with roles in plays staged by Kingston’s Bottle Tree Productions. She followed through on that interest by enrolling in the Limestone Education through the Arts Program, or LEAP, in grades 7 and 8.

It wasn’t until she was at Regi that she gravitated toward film rather than theatre, in part, she said, because she can’t sing.

Starting in Grade 10 or 11, she said, she would commute to Toronto to take lessons at Armstrong Acting Studios — where she learned to transition from a stage to a set — and, later, for audition after audition.

“There was a period in high school where I don’t think I was in class five days straight for the entire year,” reminisced Turner, who wound up graduating from the International Baccalaureate program.

Turner landed roles in student films at first, then moved on to small, independent ones. Whenever she was on set, she was sure to ask questions so she could appreciate what happens behind the cameras as well as in front.

“So once you kind of learn those details and aspects of the ‘behind the scenes’ of film, I feel like you gain a greater understanding of how the whole production is coming together,” she suggested. “And that helps you fulfil your role better as an actor. So those smaller projects I was able to kind of learn alongside students who were also learning at the same time.”

After she finished up at Regi in 2020, just after the pandemic was declared, she was accepted into the Sauder Business School’s commerce program at the University of British Columbia.

She chose to attend university in Vancouver, in part, because of the opportunities the film industry there offered.

“It’s kind of hard with acting — you never really know when something’s going to happen,” she said. “That’s what I love and hate about it. It’s like, is anything solidified? No, but I’m just gonna keep working towards it. And I think that’s all I can really do.”

She hopes that, should an acting career not be in the offing, her education will land her another role in the film industry.

“No matter what, I’m going to be involved in the film industry in some way or another, and I’m hoping that business will kind of connect with that,” she explained.

“I’m learning a bit about kind of how the background stuff works, and I hope I can relate that to film production and maybe even some of the behind-the-scenes stuff, which I haven’t really done before. So I’m kind of excited to look into that as well in the future. But, yeah, acting is really where my passion is, and I just could never see myself not acting.”

She was able to take some acting lessons while on the West Coast and meet other actors in the Vancouver scene for a little while, but now she is back doing auditions online again.

“My four roommates here have to deal with me being like, ‘Hey, can you come film another audition with me?’” she said. “I make them read lines with me all of the time.”

Turner is to take another evil turn in the horror feature “Deinfluencer,” which is due later this year, but for now, she’s focusing on “Stupid for You” and Thursday’s premiere.

Before the pandemic forced the festival online again, she was supposed to fly home for the gala opening. Instead, she’ll watch it with her housemates in Vancouver.

She said she hadn’t heard of Reelout before this year.

“I just think it’s really a great opportunity to celebrate Kingston and the LGBTQ community,” she said, “by sharing all these different kinds of creative narratives that I now get to be part of.”