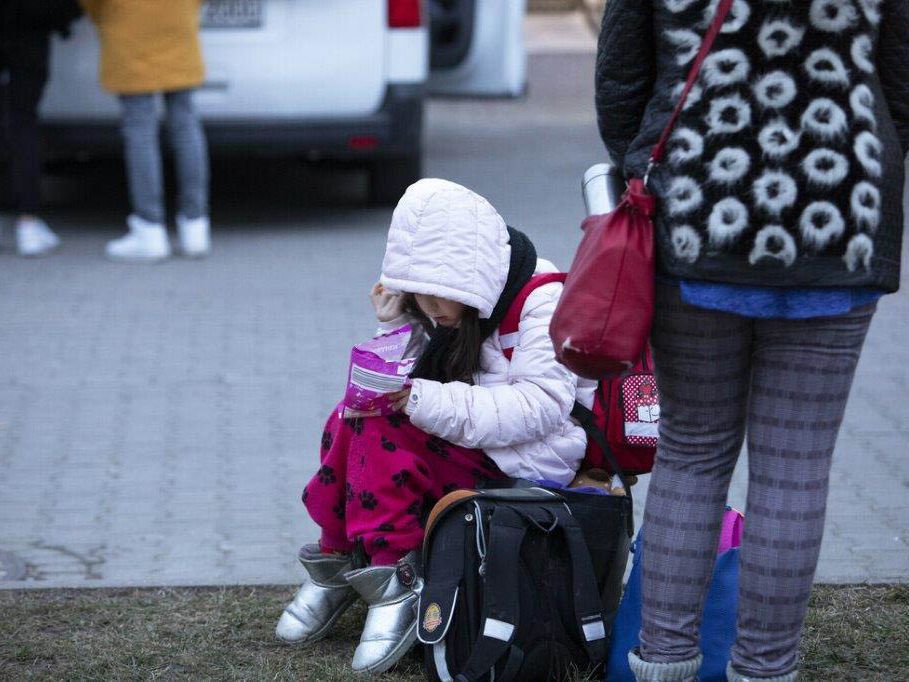 Confronted by Russia’s brutal war of aggression against neighbouring Ukraine, Poland has opened its border to millions of traumatized refugees, many of them children.

According to UNICEF, approximately two million children have escaped the violence, making up “half of all refugees from the war in Ukraine.” And UNHCR reports that more than four million refugees fled Ukraine between Feb. 24 and March 29.

UNHCR also reports that Poland has taken in approximately 2.3 million refugees in total. According to UNICEF, Poland has welcomed more than 1.1 million children.

“It’s a lot to process, once you’ve crossed the border into a neighbouring country,” Plan International’s Colin Rogers said of traumatized refugees seeking safety in Poland.

“You’ve left your husband, your son, your father behind in Ukraine, because it’s primarily women and children that are crossing into neighbouring countries,” explained Rogers, who serves as the humanitarian non-governmental organization’s head of disaster preparedness and response.

“I am currently in Warsaw, trying to co-ordinate our scale up and our various teams,” said Rogers when reached in Poland by the Whig-Standard via WhatsApp. “I came for one week to do the scoping trip, and I think I’m into end of week four,” he revealed during an in-depth interview.

Plan International is responding to the needs of Ukrainian refugees in Poland, Moldova and Romania, working with local organizations, UN agencies and governments. The NGO’s refugee response priorities include: child protection, mental health and psychosocial support, cash and voucher assistance, education, and advocacy.

“What our role here is to work with local organizations. Civil society in Poland is extremely strong, and doesn’t require us to come in and take the leadership on this response,” Rogers explained.

“It’s really struck me, since arriving in Poland, is just how much Poland, the government, the civil society, the general public have really stepped up. And it’s a huge effort that they’re running. The volunteers, the amount of people that are just working flat out to ensure that refugees arriving in-country get the support they need, when they need it. So, we really don’t want to come in and replace that.”

Local organizations have told Plan International that they have the capacity and skills to respond to the massive refugee crisis. “What they don’t have is the humanitarian background and the experience of working in refugee settings,” Rogers noted.

Plan International provides civil society groups with mental health training to help them cope with the demands of refugee work and to build resilience.  The NGO also teaches local volunteers about “psychological first aid” for refugees. The training helps them “to identify any warning signals that somebody is in need of immediate support, and knowing where to refer individuals for that support.”

“As we go forwards, we would like to be talking with the minister of education, with other agencies as to how we can support the integration of Ukrainian children into the education sector, so that they can continue their education and don’t miss out,” Rogers said.

“Because we don’t know how long they will be outside of Ukraine. It’s really important that children get that stability; that will really help them with their own mental wellbeing…We don’t want a lost generation of children…”

Earlier this week, Harjit Sajjan, Canada’s Minister of International Development, announced $67.2 million in development assistance to support education for children and youth displaced by conflict and crises around the globe.

In recent years, there have been incidents involving humanitarian workers and volunteers sexually exploiting people in need. Does Plan International work with local groups on safeguarding (protection) measures?

“Absolutely, this is the foundation of everything that we do,” Rogers answered. “We are looking to strengthen awareness of that, make sure there are systems in place and ability to report.” (A safeguarding specialist was scheduled to arrive in Poland the day after the March 25th interview.)

“This is a worry for me,” Rogers said of the possibility that refugees could be exploited.  “There’s been such a huge mobilization of civil society.  And 99.9% of those are going to be really good people that are doing the work that needs to be done, and really going above and beyond.

“But there is the potential that predators could see the potential opportunities for taking the advantage of situations. So, we need to make sure that can’t happen. And we will be working with all our partners to really strengthen that safeguarding; to work with refugees as they arrive so they know what the safeguards for them are.”

It is important to ensure that unaccompanied and separated refugee children “aren’t slipping through the cracks, that they are being identified quickly and referred to the appropriate services where we can protect them,” Rogers said.

As the war drags on, the humanitarian situation inside Ukraine continues to deteriorate. And that worries the Plan International staffer.  “My main worry is that the subsequent waves of refugees arriving will be increasingly traumatized,” Rogers said.

The first wave of refugees possessed the means to quickly flee Ukraine before their homes came under direct attack by Russian forces. However, since those early days of the war, Ukrainian cities, towns and villages have come under heavy Russian bombardment and shelling.

“My worry is those children are going to be quite traumatized from everything they’ve gone through over the last weeks,” he confided.  That is why Plan International is working with local partners in Poland to prepare for subsequent waves of traumatized refugees, “so that we have a different level of support for them based on what they’ve been through.”

Rogers is staying in a hotel in Warsaw that hosts refugees. “They fled with very little belongings, but they’ve all come with their pets,” he observed.

Dogs, cats, and even birds are ever present in the hotel’s lobby and corridors. And these beloved companion animals are an important source of solace for the refugees.

“Those pets, you can see how important they are,” Rogers stated. “For children who are hugging, holding them, they’re really providing that real sort of support to them, that level of stability, that sort of mental health aspect. You can just see how important those animals are for the recovery of refugees who have been through so much at the moment.”

When you meet refugee children, what is their biggest concern?

When you meet refugee kids, what do you observe?

“A little bit dazed,” Rogers replied in a quiet, empathetic tone. “A little bit confused as to what is happening next.”

What do you want Canadians to know about the crisis?

“It is a crisis that is going to require probably a level of ongoing support even when peace comes,” he said. “Ukraine is going to take years to recover, to rebuild, for people to resume their lives…”

In particular, Ukrainian children will require mental health support, “so that trauma isn’t carried over from their childhood into their youth, into their adulthood,” Rogers said.

However, he urged the community of nations not to forget refugees displaced by other conflicts.

“I think we’re seeing unprecedented levels of humanitarian need globally at the moment. And Ukraine is a key, critical crisis, but we mustn’t forget the others.”