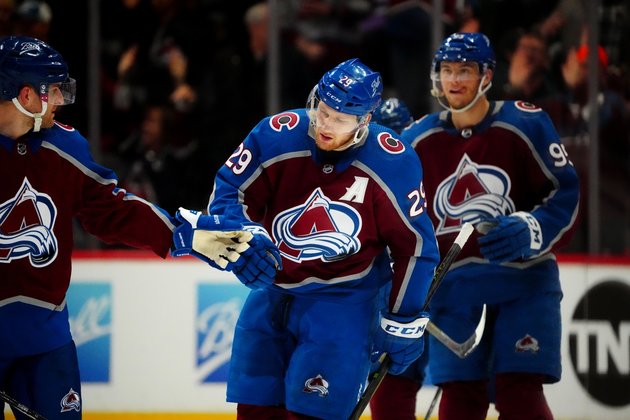 By earning a seventh consecutive win on Wednesday, the Colorado Avalanche broke the franchise regular-season record for wins in a season and showed again that they will be among the favorites to hoist the Stanley Cup when the playoffs begin next month.

The Avalanche will look to continue adding to their victory total on Thursday, when they host the New Jersey Devils for the first time in more than two years.

The Avalanche will be completing a back-to-back set after routing the Los Angeles Kings 9-3 on Wednesday in Denver. The Devils last played on Tuesday, when they beat the Arizona Coyotes 6-2 to improve to 2-0-0 at the start of a five-game Western Conference road trip.

Colorado’s win Wednesday was a milestone result in numerous ways. With their 53rd victory, the Avalanche (53-14-6, 112 points) snapped a tie with the 2000-01 and 2013-14 clubs for the most wins in team history. The 112 points are the most in the NHL this season — two ahead of the Florida Panthers — and six shy of the team record set by the 2001-01 squad, which won the franchise’s most recent Stanley Cup.

“The crowd was chanting before the anthem even started,” Avalanche coach Jared Bednar said. “You can feel that when you go on the bench as a coach, as a player, that they’re into it and they were going to be energized. And we wanted to make sure we came out and played a really good game after having a couple of off games in Winnipeg and Edmonton.”

Of course, the Avalanche won both of those contests, even if they needed more than 60 minutes to do so. Colorado edged the Jets 5-4 in overtime on Friday before beating Edmonton 2-1 in a shootout on Saturday.

There was no suspense Wednesday, when the Avalanche raced out to a 4-0 lead in the first 11 minutes. Nathan MacKinnon finished with a hat trick as Colorado won by more than two goals for the first time since a 6-3 victory over the Philadelphia Flyers on March 25 and posted its highest goal total since a 9-3 win over the Arizona Coyotes on March 31, 2021.

“Nine’s enough, I think,” MacKinnon said after the crowd chanted, “We want 10!” late in the third period.

A win on Thursday would also tie the season-long winning streak for the Devils, who beat the wild-card-contending Dallas Stars 3-1 on Saturday before cruising past the Coyotes. The six-goal outburst Tuesday marked the 10th time this season New Jersey has scored at least six times.

“Got rewarded for playing the game the right way,” Devils coach Lindy Ruff said. “Competed hard on pucks and got guys around the net.”

The Avalanche won their most recent home game against the Devils on Dec. 13, 2019, when the hosts earned a 3-1 victory. The teams didn’t oppose each other last season, when regular-season play consisted entirely of division games.