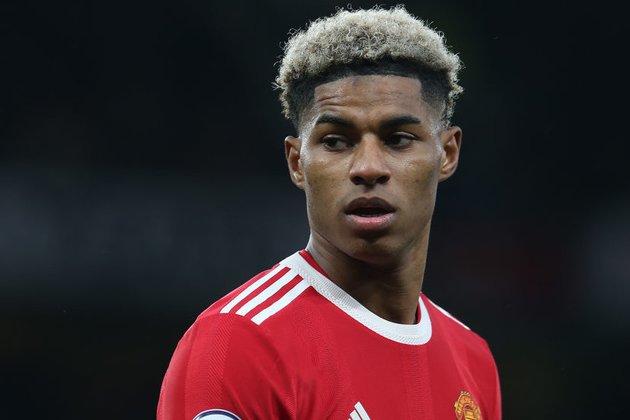 The Manchester United star has apologized to Jewish people for causing upset after being pictured with controversial rapper Wiley, who has expressed anti-Semitic views

England and Manchester United striker Marcus Rashford has apologized to Jewish people who were offended and reiterated his disdain for discrimination after being photographed partying with anti-Semitic rapper Wiley alongside Old Trafford teammate Jesse Lingard in Dubai.

Wiley – real name Richard Kylea Cowie – was dropped by his management company in 2020 after making crude anti-Semitic comments on social media and has been banned from Twitter twice.

The grime artist was punished for a barrage of abusive posts, including a description of Jewish “coward and snakes”.

The musician, who was honored as a Member of the British Order in 2018, subsequently told publication The Voice that Jewish people in the music and entertainment business “still see us as slaves” in relation to himself and fellow black performers.

Being spotted with Wiley is not a good look for Rashford, who has been praised for speaking out against racism and pressuring the UK government into providing free meals for children during school holidays.

The 24-year-old and Lingard received substantial criticism for the photo, with some accusing Rashford of being insincere and questioning his backing of the taking of the knee for Black Lives Matter before matches, which is purportedly an anti-racism gesture.

“Hard to believe those sincere social media posts, full of emotional intelligence, are actually written by him, rather than tightly scripted by his PR agency. The hypocrisy of still taking the knee,” said one.

The Campaign Against Anti-Semitism (CAS) said on Twitter: “We applaud Marcus Rashford for doing so much to fight racism – hence it’s so disappointing to see him and Jesse Lingard hanging out with Wiley, who has called for Jews to ‘hold some corn’ – a slang expression meaning that they should be shot. Anti-Semitism is also racism.”

The organization then highlighted a video it shared of Wiley in December 2021 in which he appeared to suggest that Nazi leader Adolf Hitler had valid reasons to hate Jews.

Rashford responded to a story run by the UK Jewish Chronicle about the photo, which it captioned ‘England footballers pictured partying with disgraced rapper Wiley.’

“This picture has been brought to my attention which I understand now, given [the] context, could easily be misconstrued,” the Mancunian replied to the post.

“I would like to reinforce that I do not and will not condone discriminative language or behavior of any kind aimed at the Jewish community or any other community.

“I truly believe that tackling anti-Semitism in and outside of the game requires a greater level of attention and should very much form part of the game’s anti-racism stance.”

When the editor of the Jewish Chronicle asked Rashford if he was aware of the video of Wiley speaking about Hitler, he replied: “I am now and I completely condemn it.”

A fan also received a personal response when they claimed that Wiley “hates Jewish people to his core.”

“I wasn’t aware of comments that had been made when I got pulled into a photo opportunity – comments that I absolutely condemn,” explained Rashford.

“I apologize for any upset caused. We just all happened to be in the same place at the same time.”

An actor and anti-racism campaigner urged Rashford to make his opinion on the saga more visible to his millions of followers, with his replies to the relatively small accounts likely to be seen by far fewer people than a message of his own.

“Speak specifically about Wiley and why he is an anti-Jewish racist,” they implored him.

“Unless we talk specifically about the nuts and bolts of racism then we run the risk of talking in feelgood platitudes. You have a chance to specifically educate on why Wiley is a racist.”

Heavily-followed British actress Tracy-Ann Oberman, who grew up in a Jewish family and has spoken out on anti-Semitism in the Jewish Chronicle, told Rashford: “Thanks for distancing yourself from the unrepentant Jew hate of Wiley. This statement was quick and much appreciated.”

Lingard used his Twitter account, which has more than 2.8 million followers, to distance himself from the photo and emphasize his views by announcing: “I’ve been made aware of a photo circulating currently that can easily be misconstrued.

“I want to make it clear that I do not condone any form of racism whatsoever.”

The United pair headed to Dubai during a 13-day break in action ahead of their next match.

Rashford scored the last-gasp winner in a 1-0 Premier League home victory over West Ham on Saturday, allowing United to leapfrog the Hammers into the final Champions League qualification place in the table.

United next play when they host Middlesbrough in the FA Cup fourth round on February 4.