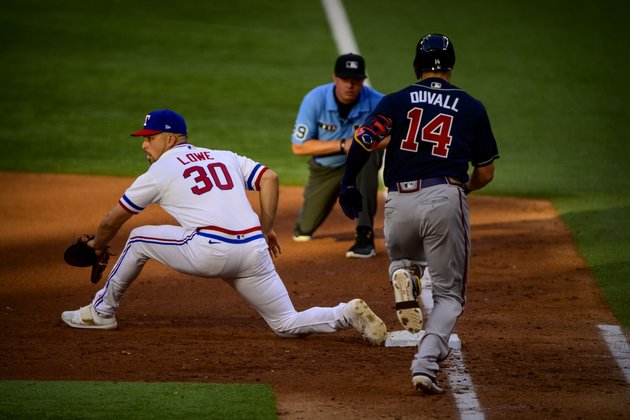 Texas right-hander Dane Dunning pitched a season-high 7 2/3 innings and allowed only one run on three hits to help the Rangers end a four-game losing streak by beating the Atlanta Braves 3-1 on Saturday in Arlington, Texas.

Dunning (1-1) struck out five of the first six batters he faced and finished with seven strikeouts to match his season high. He did not issue a walk and retired 14 in a row before Adam Duvall doubled with one out in the eighth.

After a groundout, Dunning then gave up an infield single to Dansby Swanson to put runners on the corners. The Rangers brought in reliever Dennis Santana, who ended the threat by getting Ronald Acuna Jr. to ground out to the shortstop.

Joe Barlow pitched a perfect ninth inning to earn his first save.

Texas recalled outfielder Zach Reks from Triple-A Round Rock earlier in the day, and he made an immediate offensive impact in his Rangers’ debut. Reks was 1-for-3 with a single, his first big-league hit, drove in a run and scored a run.

Atlanta starter Bryce Elder (1-3) had his homecoming ruined. The rookie, who grew up not far from Arlington, worked 4 1/3 innings and allowed three runs on four hits, three walks and one strikeout. Spencer Strider finished the game with 3 2/3 scoreless innings with five strikeouts.

Texas got on the board in the first inning when Corey Seager hit a solo homer, his fourth. Seager has four home runs in his last three games.

The Rangers added a run in the second inning on Sam Huff’s RBI single, which scored Reks.

The Braves got a run back in the third inning on an RBI single by Acuna. It was his first RBI since returning from knee surgery 10 months ago.

Texas got the run back in the fourth inning when Reks lined a single to right that scored Andy Ibanez.

The teams will play a rubber game on Sunday.