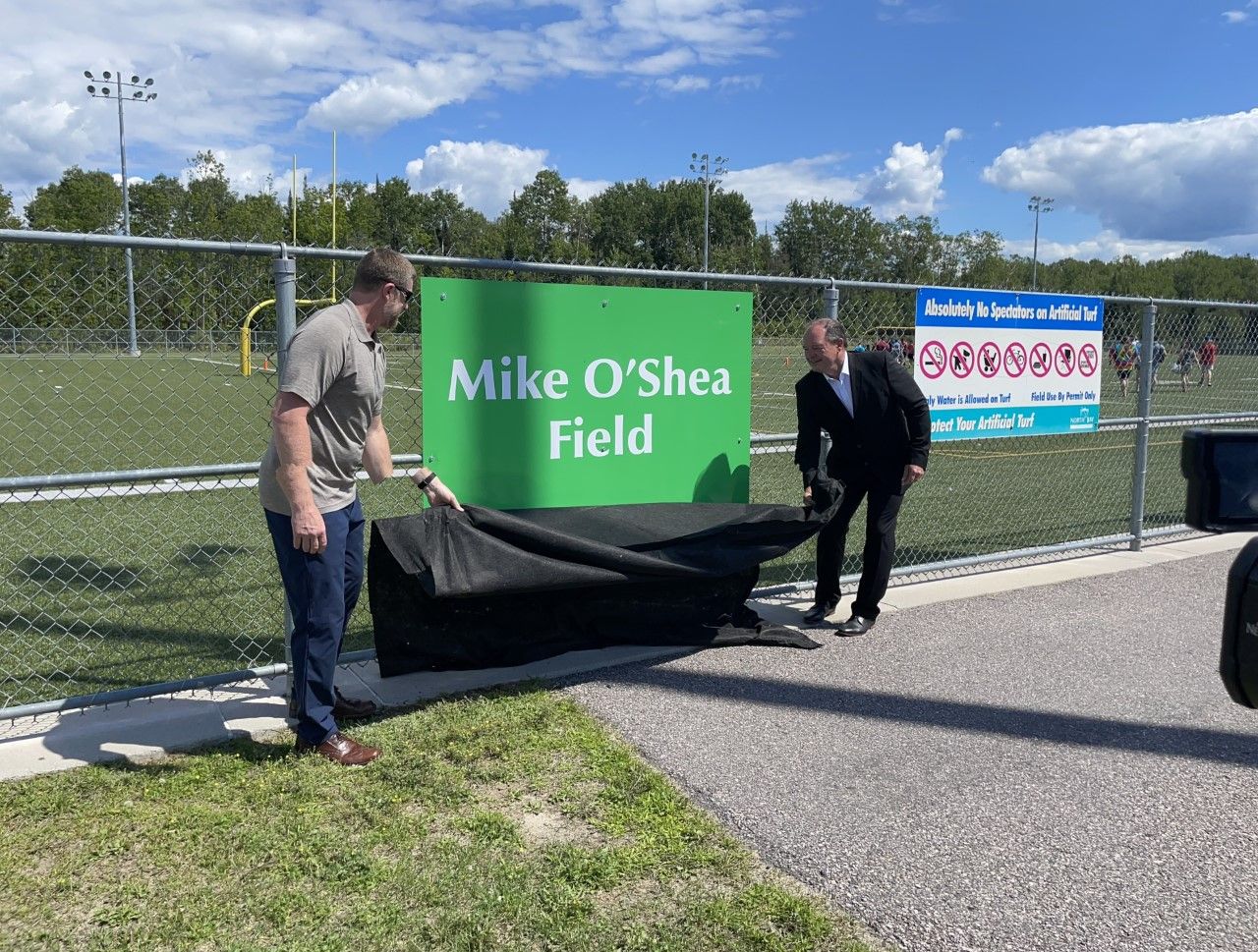 Mike O’Shea’s resume is likely second to none is the entire history of the Canadian Football League.

O’Shea has six Grey Cup rings, three as a player and three as a coach. He is in the CFL Hall of Fame, and was rookie of the year as a player, the league’s top Canadian and coach of the year.

The football field at the Omischl Sports Complex has been named after the Widdifield Secondary School graduate.

The Winnipeg Blue Bomber coach came home, in the middle of the season, for this honour.

“Very honoured, very humbled, you don’t start playing any sport for this type of accolade.  If you hang around long enough these things can happen,” O’Shea joked.

“It is very interesting seeing your name on something. You just look forward to hearing the stories of the kids that come up playing on this field getting their start. I look forward to those success stories.”

Thirty-four years ago, O’Shea was a member of the first Widdifield Senior football team that won the NDA (Nipissing District Athletics) title.

More than three decades later O’Shea is still immersed in the game.

“It’s really hard to dream that big. I encourage people to, as you know that’s where it starts. We were just hoping to go to university. Then after you play in university you hope to get drafted. With all that time you get to work hard, and you have good people around you, coaches and mentors who keep on pushing you.”

Stu Jackson was one of the coaches during O’Shea’s years at the now closed Widdifield Secondary School.

Jackson says he knew O’Shea was no average player, even as a teenager.

“He was a student of the game then, he had so much potential, Tom Graham (another former coach) got him into Guelph (University). We knew he was going to be good.”

Many of O’Shea’s Widdifield teammates were part of the close to 200 people at the ceremony.

Rob McCombie is a long-time friend and Widdifield teammate, after 30 plus years O’Shea is a cherished buddy.

“We started playing football in grade nine, I worked for his parents at Dairy Queen, it was my first job.”

McCombie has celebrated many of O’Shea’s Grey Cup wins in person when his teammate was a player and coach.

“In the old days it was youthful exuberance, the first one I remember (that way). The last one was more reserved. We just appreciate the work he has done. His accomplishments, everyone in the league wants to play for Mike. They see what he’s built, it’s all him. It comes from his parents, his family, it is all handed down and that is why he’s successful.”

O’Shea’s mother was in attendance.

Lynda O’Shea says, “It’s a day for Mike and I am proud of him. I’m prouder of the person he is, he’s a good guy. If he wasn’t a good guy, there would be a day like this.”

O’Shea has won back-to-back Grey Cups as the Bombers coach.

The team started the year with nine wins, losing for the first time on Thursday versus Montreal.   Winnipeg still has the best record in the CFL as O’Shea and his team will try for a CFL three-peat.