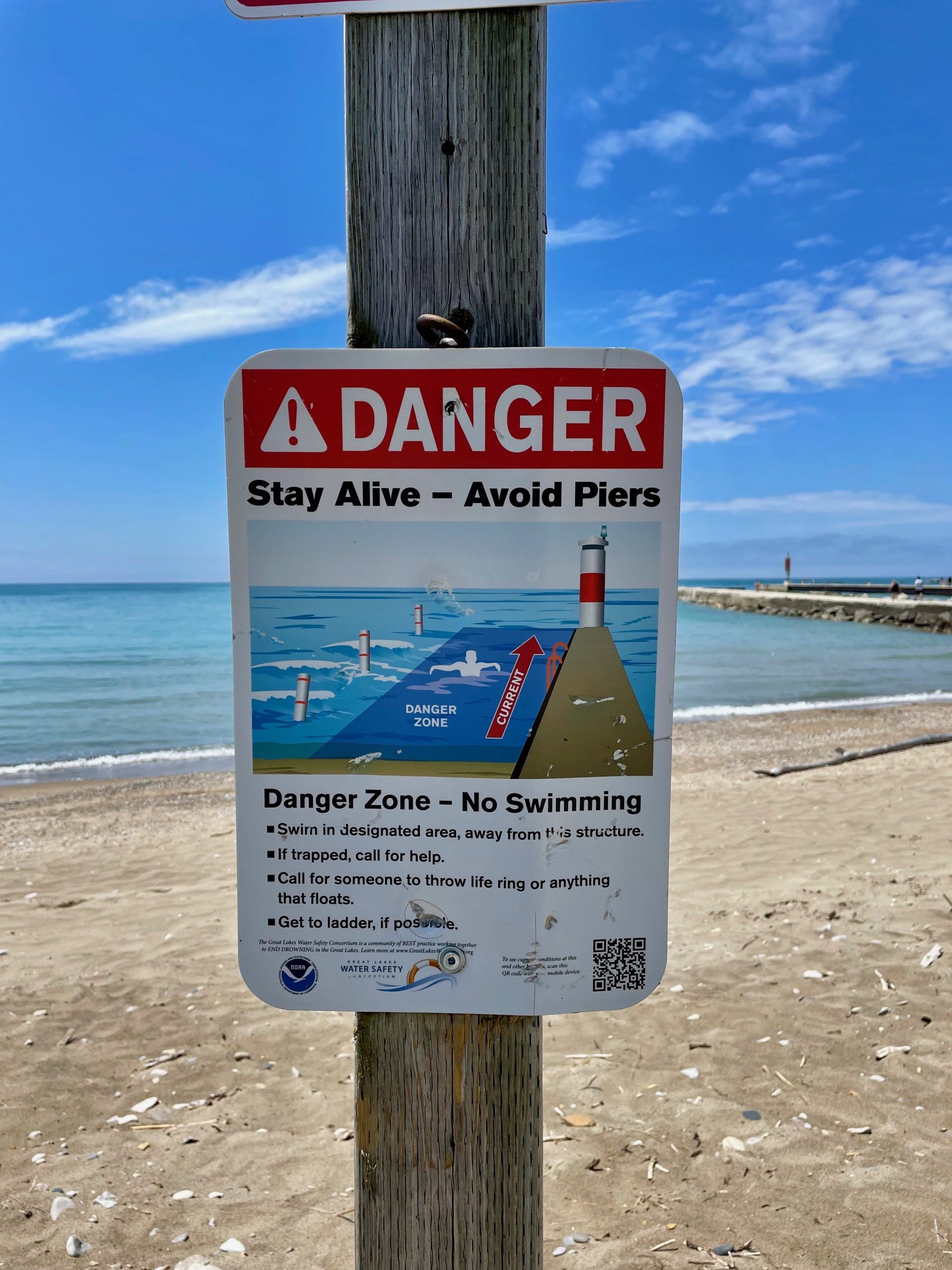 A Kincardine man police honoured recently for his part in life-saving efforts — of a man who died trying to save his cousins at Kincardine’s Station Beach in 2020 — said some people don’t understand the water is still dangerous there.

Dave Jenkins noticed a man and his small children in the water the other day, despite signs warning people of the danger, and not to swim. Jenkins said he told the man the water is dangerous.

The man thanked him but said it was OK because he was with the children — in the hazardous area amid rough water, Jenkins said. Five people have drowned on that south side of the south pier at Station Beach since 2008.

So Jenkins sees the risk differently, knowing the number of drownings there and having participated in the unsuccessful rescue of Aleem Ramji on Sept. 3, 2020 in the same area, when police said waves reached four metres high.

He and Kincardine resident Mike Walsh pulled the 38-year-old Toronto man out of the lake, after Walsh spotted him floating in waist-deep water, about 30 metres or less from shore. It was dark when they walked in to get him around 8 p.m. and started CPR on shore until emergency responders took over.

Ramji had entered the water to help his two teenaged cousins who were swept off the south pier by a wave. They got out but the winds and powerful waves and currents played havoc with rescue efforts, Jenkins said.

“It was really rough and it’s not just the roughness of the water but the direction of the water as well that counts,” said the 67-year-old, a former windsurfer and retired Bruce Power inspection manager.

“I’ve spent countless hours in the water there and even if you’re a strong swimmer, that area around the pier can be really bad . . . What happens is the waves come in and they push you one way . . . and it pushes you back the other way.”

A pilot project at Station Beach this summer is employing a network of sensors measuring water level, waves and traffic and pedestrian traffic in a bid to create a warning system to prevent drowning. It could be something used at other beaches someday.

Jenkins didn’t attend the West Region OPP awards ceremony June 22, where OPP Commissioner’s Letters of Appreciation were awarded to him and others. Walsh got a Citation for Bravery and a St. John Ambulance Award for Life-saving.

Also recognized was Const. Ed Brunk, who was awarded a Commissioner’s Citation for Bravery and St. John Ambulance Award for Life-saving for assisting the rescue of the teens who’d been swept off the pier on that stormy night.

Ramji was posthumously awarded the Commissioner’s Citation for Bravery. With Ramji’s efforts and those of others who joined in, the two girls made it back. But Ramji was overcome by the waves.

This was the third time Jenkins had used CPR, something he practised monthly as nuclear plant safety protocols required. The first time he used it was on his neighbour, but he couldn’t save him.

The second time he and another man began CPR on a victim who’d collapsed on his front lawn. The man started and stopped breathing a few times as they continued their ultimately successful efforts.

He said the gratitude he felt from the man’s wife made him feel glad he tried to help. But even making an unsuccessful attempt left him knowing he did the right thing and everything he could, he said.

Jenkins said everyone should learn CPR and step forward when needed.