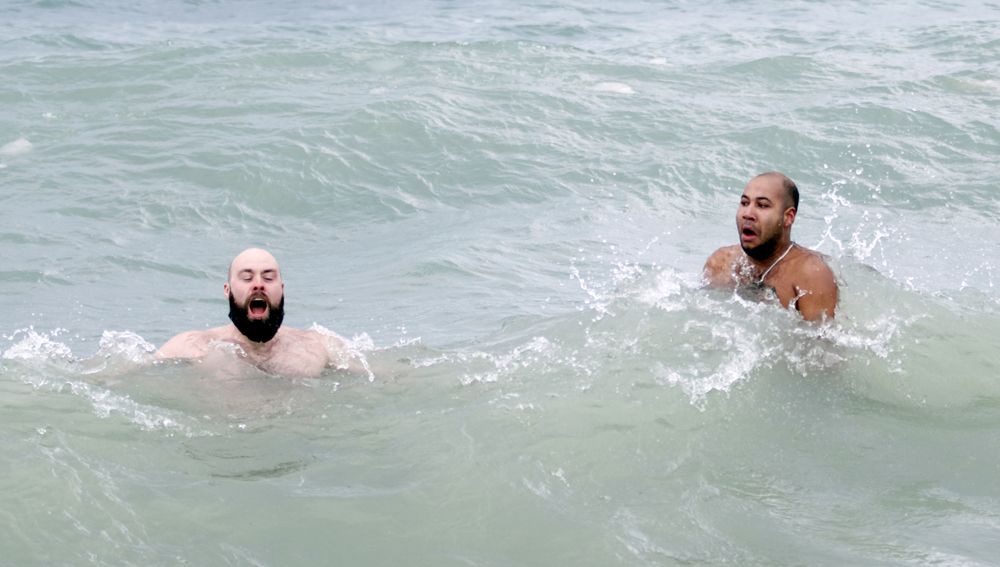 Talk about going crazy for a cause.

Nearly a dozen dippers braved the Georgian Bay water Sunday at Fred Raper Park in support of Save Georgian Bay, a group of residents in opposition of a Pumped Storage Hydroelectric Project being proposed by TC Energy at the 4th Canadian Division Training Base in Meaford.

On a day where the chilly winds whipped the bay into a frenzy with rolling green-grey waves battering the ice-covered boulders lining the shoreline, people began to undress.

Against the strong recommendation of the paramedics on site and the wishes of event organizers who would rather their supporters stay dry and not risk injury, Toronto’s Darren Daye-Trottier stripped down to his speedo made to look like a pair of denim short-shorts and strutted into the frigid depths.

Basketball-sized chunks of ice rolled by Daye-Trottier as Hamilton’s Andre Sampson-Bent – who moments earlier upon hearing the event was on the brink of cancellation said “the people want a show” – joined to an upswell of hoots and hollers from the gathered crowd.

Both dippers were proxy-polar bears on this day, volunteered into service by relatives and friends with homes nearby to the proposed location of the pumped storage facility.

Sampson-Bent’s grandmother lives in Meaford. Daye-Trottier’s girlfriend’s father has a cottage near the army base.

“She said it was for a good cause so we figured we would rally the troops and lose some more brain cells,” Sampson-Bent said. “Definitely colder than I expected, but the body shuts down, the mind shuts down. Really, you have about five seconds where you wonder what the hell you’re doing here, but it’s for a good cause. It was a blast.”

Jody Carleton was the first to plunge and kick off the Save the Bay polar bear dip. He waded into the waves, submerged himself completely, and rose again with a double thumbs-up salute to the cheering crowd.

Carleton was dipping for the Save the Bay cause, but also because his local business “kicked butt all year” and exceeded targets.

“We broke some records so I told them I would go jump in the bay,” Carleton said, using his suffering as a motivational tool.

He went back into the water a second time after a brief warm-up period.

“The first time was easy, super easy. The second time I knew what to expect so it was a little harder. Honestly, as soon as your feet touch the water you’re already done. The hardest part is getting there.”

The Save Georgian Bay group raised $23,172 according to the event page on the savegeorgianbay.ca website. The total exceeded their goal of $15,000.

Save Georgian Bay member Pat Zita said the money is earmarked to help the not-for-profit association with the costs of informing the public about TC Energy’s proposal.

“For the last three years we’ve been doing the work using our own money,” Zita said.

Zita said volunteers and supporters would often ask how they can support the group. The polar bear dip was then organized as a fundraising opportunity.

“It’s a way they could help,” Zita said.

TC Energy plans to pump water from Georgian Bay during off-peak hours overnight into a massive 374-acre storage reservoir built into the escarpment on the federally owned land at the 4th Canadian Division Training Centre.

The reservoir will hold 20 million cubic metres of water, enough to fill 8,000 Olympic-sized swimming pools. The water stored in the reservoir would be released back into the bay during peak usage periods to power hydraulic turbines and generate up to 1,000 MW of electricity when it’s more in demand.

At a Jan. 31 meeting of Meaford council, TC Energy’s Director of Power Business Development John Mikkelsen said the corporation has made $1 billion worth of changes to their proposal – originally estimated to cost $3.3 billion – after public consultations.

Most of the changes have been made to the proposed facility’s buildings and transmission lines to move them out of view. Newly designed low-velocity water intake and outfall pieces have been moved away from the shoreline into deeper water in the updated plans to protect fish and fish habitat, Mikkelsen said.

The Save Georgian Bay group has organized several protest rallies in Meaford and surrounding communities and has thousands of signatures collected in petitions opposing the facility.

“They have listened to us, but we’re not satisfied because we don’t want the plant to go through. This is a natural resource that’s basically being marginalized. We want to preserve it. We want it to stay the way it is,” Zita said.

Last summer, Canada’s Department of National Defence and TC Energy reached an agreement that, subject to conditions and regulatory approval, allows for the development of the project on the Meaford base. The DND has said the project could co-exist at the military training base as long as it does not impact military activities and training.

TC Energy will also need to complete provincial and federal assessments and required regulatory approvals as well as reach an agreement with the Saugeen Ojibway Nation, which TC Energy has previously said would need to approve the plan before the company moves forward.

Zita said the Save Georgian Bay group is working to keep residents informed and engaged while trying to establish a dialogue with TC Energy.

“We want to establish a dialogue. Since the beginning, we’ve just been trying to have a dialogue. The results will be what they’ll be, but that’s our role. We want to educate about this project and what it’s going to be doing. We’re not simply against it. We want to ensure we hold them to account to whatever they’re saying,” he said.