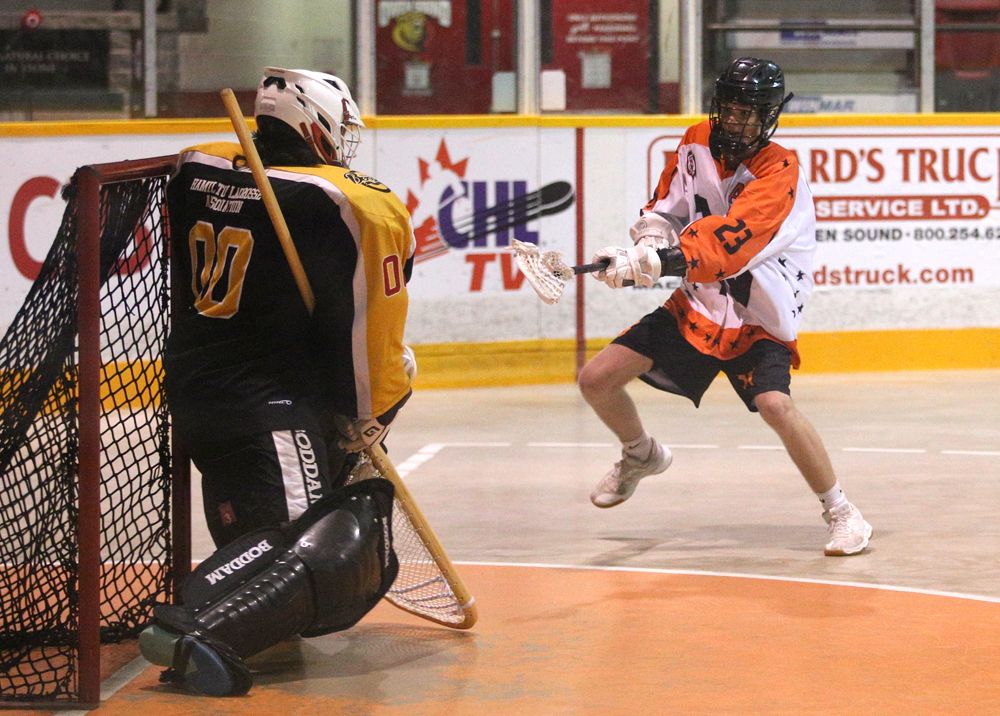 On paper, without context, losing by a single goal in the last minute of a game to one of the better teams in the Western Conference might be viewed as a confidence builder for the Owen Sound North Stars headed into the Ontario Junior B Lacrosse League postseason.

But, in reality, and with heaps of cruel context, an 11-10 loss to the Hamilton Bengals at the Bayshore Sunday was an absolute heartbreaker.

“That’s a tough one,” said N’Stars assistant coach Rhett Simmons “It would have been nice to carry momentum into a playoff matchup.”

Owen Sound had carved out a two-goal lead on the Bengals, 10-8, with just over five minutes left to play in the third period.

Hamilton scored three unanswered goals as time ticked away, including two in the final 60 seconds of competition to snatch the victory.

With the loss, the North Stars finished the 20-game regular season with a record of 9-10-1, good enough for seventh place in the Western Conference and a likely date with the Windsor Clippers in a first-round best-of-five series, with final playoff seeding and schedule still to be determined as of Sunday evening.

Owen Sound gained another win this week as the Six Nations Rebels forfeited, by rule, an earlier game against Owen Sound due to dressing an ineligible player, according to team sources.

On May 6, the North Stars fell to the Rebels 19-6 on the road. The game’s result has now been overturned, and Owen Sound was declared the winner due to the league’s ruling.

With a win Sunday, Owen Sound had a chance to catch Six Nations as a result of the two-point bump and slot into sixth-place in the west – but the third-period collapse negated the opportunity.

Regardless, Simmons stayed positive following the game and believes his team showed they can compete with the conference’s better clubs.

“It’s kind of a motivator, hopefully,” he said. “We’ve had close games. We had a win against Windsor and a two-goal loss with an empty-net goal to Elora. I think we’re competitive, we just have to come with the right mindset.”

On paper, it’s not hard to imagine Owen Sound pulling off a first-round upset.

The North Stars have a pair of players in the Top-20 for league scoring in Carter Moran and Luke Grimoldby. Both Moran and Dom Millman have lit the lamp with consistency all season long.

On special teams, the club ranked second in the circuit for power-play percentage and fifth in penalty-killing headed into Sunday’s game.

They also finished the last weekend set of the regular season going two-for-three with wins against London and Wallaceburg.

“We might not be up there in the standings, but I think as our personnel and talent on the floor go, we can compete with anyone,” Simmons said.

In net, Simmons said the Scenic City squad will lean on Brady Lisk for the playoffs.

“We have guys who get points. The goalies are making saves. We have a good (defence). Everything is there for us, we just need it all clicking at the same time,” Simmons said. “We’re right there.”

For 55 minutes Sunday, they proved it.

“It was a couple of mental errors. We couldn’t stay out of the box at the end, and it just seemed like we ran out of gas,” Simmons said.

Brayden Krueger, Carter Moran, Tyson Morrison and Eoin MacKay each scored a pair of goals in the game for Owen Sound while Dom Millman and Luke Grimoldby found the net.

Nick D’Amico’s second goal of the game proved to be the winner for Hamilton with just 39 seconds left on the clock.

Duncan Carte and Josh Lucas each scored a pair, while Clark Duncan, Brady Kustra, and Trevor McDonald all scored for the Steel City cats.

With the win, the Bengals improved to 16-4-0 and pulled into a tie with the Windsor Clippers for second place in the Western Conference.

The Elora Mohawks beat Wallaceburg Sunday to jump into first place with a conference-leading 34 points and a 17-3-0 record.