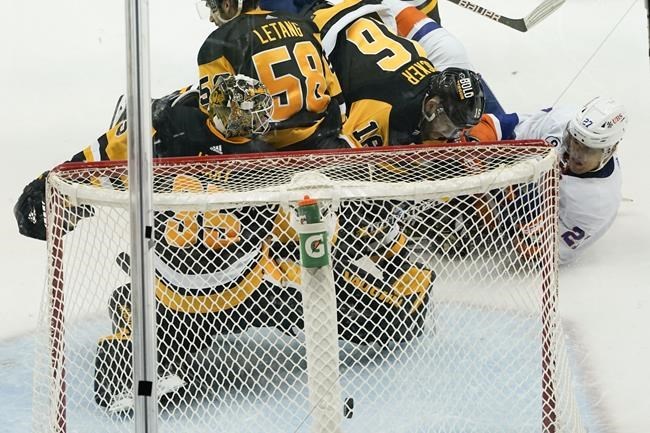 PITTSBURGH (AP) — Jake Guentzel scored twice, Sidney Crosby also had a goal and the Pittsburgh Penguins earned a playoff berth for the 16th straight season with a 6-3 victory over the New York Islanders on Thursday night.

PITTSBURGH (AP) — Jake Guentzel scored twice, Sidney Crosby also had a goal and the Pittsburgh Penguins earned a playoff berth for the 16th straight season with a 6-3 victory over the New York Islanders on Thursday night.

Guentzel scored his 36th and 37th goals and Crosby his 29th as the Penguins extended the longest active postseason streak among teams in major North American professional sports.

Danton Heinen equaled a career high with his 16th goal, while Kris Letang and Brock McGinn also scored for Pittsburgh, which tied Calgary for the seventh-longest playoff streak in the NHL since 1967. Tristan Jarry made 36 saves for the Penguins, who have won two of three overall. Pittsburgh has 11 wins and points in 15 of its last 17 against the Islanders.

Ross Colton, Alex Killorn and Nikita Kucherov also scored for the Lightning. Andrei Vasilevskiy made 10 saves before being replaced by Brian Elliott, who stopped all 13 shots he faced.

The Lightning qualified for the playoffs for the eighth time in nine seasons. The two-time defending NHL champions are trying to become the first team to win the Stanley Cup three times in a row since the Islanders won four straight from 1980-83.

Ilya Lyubushkin also scored and captain John Tavares had four assists to help the Maple Leafs improve to 48-20-6, a victory shy of the club record set in 2017-18.

Nylander had his 29th and 30th goals. Mitch Marner also had an assist to hit the 60-assist mark for the second time in his career. Jack Campbell made 22 saves for Toronto.

John Carlson, Tom Wilson and Nic Dowd scored for Washington, which had won four in a row.

Robert Thomas had five assists to extend his point streak to 11 games, during which he has six goals and 23 points. Pavel Buchnevich, Brandon Saad and David Perron also scored for the Blues. The winning streak is the Blues’ longest since an 8-0 run from Feb. 18 to March 3, 2020, and they improved to 9-0-1 in their past 10.

Tarasenko has scored game-winning goals in three straight outings to give him a career-best nine on the season. Jordan Binnington stopped 35 shots for his second straight win after four consecutive losses.

Alex Tuch and Rasmus Asplund scored, and Craig Anderson stopped 22 shots for Buffalo. Defenseman Owen Power set up Tuch’s goal for the 2021 No. 1 draft pick’s first NHL point in his second career game since leaving Michigan to sign with the Sabres.

RALEIGH, N.C. (AP) — Alex Nedeljkovic had 46 saves in a sharp performance against his former team, getting his third shutout of the season and helping Detroit beat Carolina.

Moritz Seider, Adam Erne and Filip Zadina scored for Detroit. The Red Wings were recently eliminated from the postseason chase for the sixth straight year, but managed to push past the Metropolitan Division-leading Hurricanes despite being outplayed much of the way.

Carolina finished with a 46-22 edge in shots on goal, including a long stretch of the second period played in the Detroit end of the ice. But Nedeljkovic stood up against every swarming push or breakaway by Carolina. Raanta finished with 19 saves for the Hurricanes.

BOSTON (AP) — Brady Tkachuk, Josh Norris and Tim Stützle each scored a goal in the second period and Ottawa sent Boston to its first three-game losing streak this season.

Jesper Froden scored his first NHL goal for Boston, and Marc McLaughlin added his third, just six games into his NHL career. The Bruins had won eight of 10 before the skid.

The Senators wiped out a 2-0 deficit with the second-period goals for their second consecutive win. Anton Forsberg stopped 40 shots for the Senators.

Boston’s Jeremy Swayman allowed a goal on the first shot he faced and finished with 21 saves after starter Linus Ullmark left following one period with an undisclosed injury.