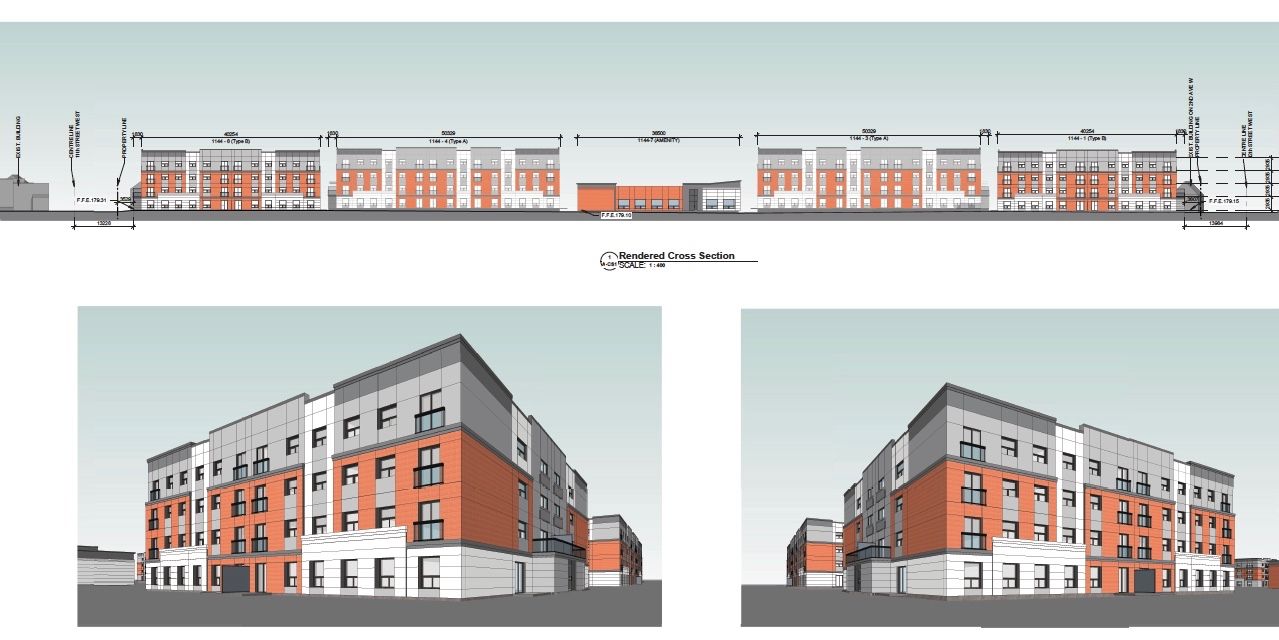 Council on Monday conditionally approved a site plan from Hansa Financial & Property Management, which has owned the former industrial site at 1144 1st Ave. W. since 2004. The project must be completed within a two-year window.

But when shovels hit the ground remains dependent on the developer satisfying the conditions of the site plan agreement, community services director Pam Coulter said during the council meeting.

The plan is to build 224 rental units and a one-storey “amenity” building, a shared parking lot with 280 spots, internal sidewalk system, and undertake landscaping, including the planting of 121 trees.

It’s up to the developer as to whether any of the units are offered as affordable, Coulter said in an interview after council, and she said she had no information about whether any would be.

The apartments will be spaced around the perimeter of the property and by doing so, the layout “takes advantage of the site location to optimize a view of the harbour . . ,” a report to council said.

“The architectural details for the proposed development incorporate red brick in all the residential and amenity buildings. The building façades also include stone, concrete, and glass,” the report said.

There are balconies on all four sides of the buildings, the report said.

Coun. John Tamming applauded having multiple smaller-scale apartment buildings in keeping with the neighbourhood, rather than a single high-rise. He noted the red-brick exterior of the buildings, another nod to the character of the neighbourhood.

Coun. Richard Thomas welcomed the promise of the improvement of a city block-sized eyesore in such a high profile area, the city’s core by the harbour. Deputy-mayor Brian O’Leary credited council breaks on development charges for spurring this and other developments.

The project qualifies for about $3 million in financial incentives: $1.1 million relief from development charges because construction is of rentals, $1.88 million over 10 years from the Vacant Lands Tax Assistance Program previously approved by council, and a $10,000 Landscaping and Property Improvement Grant.

Owen Sound Mayor Ian Boddy excused himself from the discussion and left the council chamber, after declaring a pecuniary interest related to the fact his law firm has dealt with this property for Hansa.

With council’s approval, a holding provision, which was put in place to confirm the environmental status of the site and to ensure a traffic study is completed, may now be removed for the site, a staff report said.

Industrial contaminants on the property have been adequately dealt with, the report says. About 17,000 cubic metres of soil and sediment was removed from the property. If more contamination is discovered, there are provisions to deal with it.

And a study confirmed traffic due to the development could be handled by existing roads, but 2nd Avenue West will be widened by five metres, on lands the city will obtain at no cost, Coulter said.

Cars will access the property off 11th and 12th streets east.

With council’s approval in hand, staff may now also introduce a bylaw to execute a site plan agreement and other required agreements. That’s expected on May 30.

Besides some technical conditions to be met before approval, concerning storm water management and receipt of further information, for example, the city’s conditions of site plan approval include a number of suggestions.

The they ask the developer to consider including more bike parking be included in the project and that at least some be covered, providing electric vehicle charging stations, and making internal pathways two metres wide and consider shading at least a portion of rest areas in the plan with trees or something else.

Staff also ask the developer to consider adding a playground, above-ground garden boxes and a community outdoor seating and barbecuing area, and consider locating fire department connections adjacent to the main entrance to the buildings.

The site plan conditions require confirmation that “genuine red-brown brick, not cultured stone product,” is to be used. Given the lack of snow storage on site, snow must be removed following each significant snowfall.