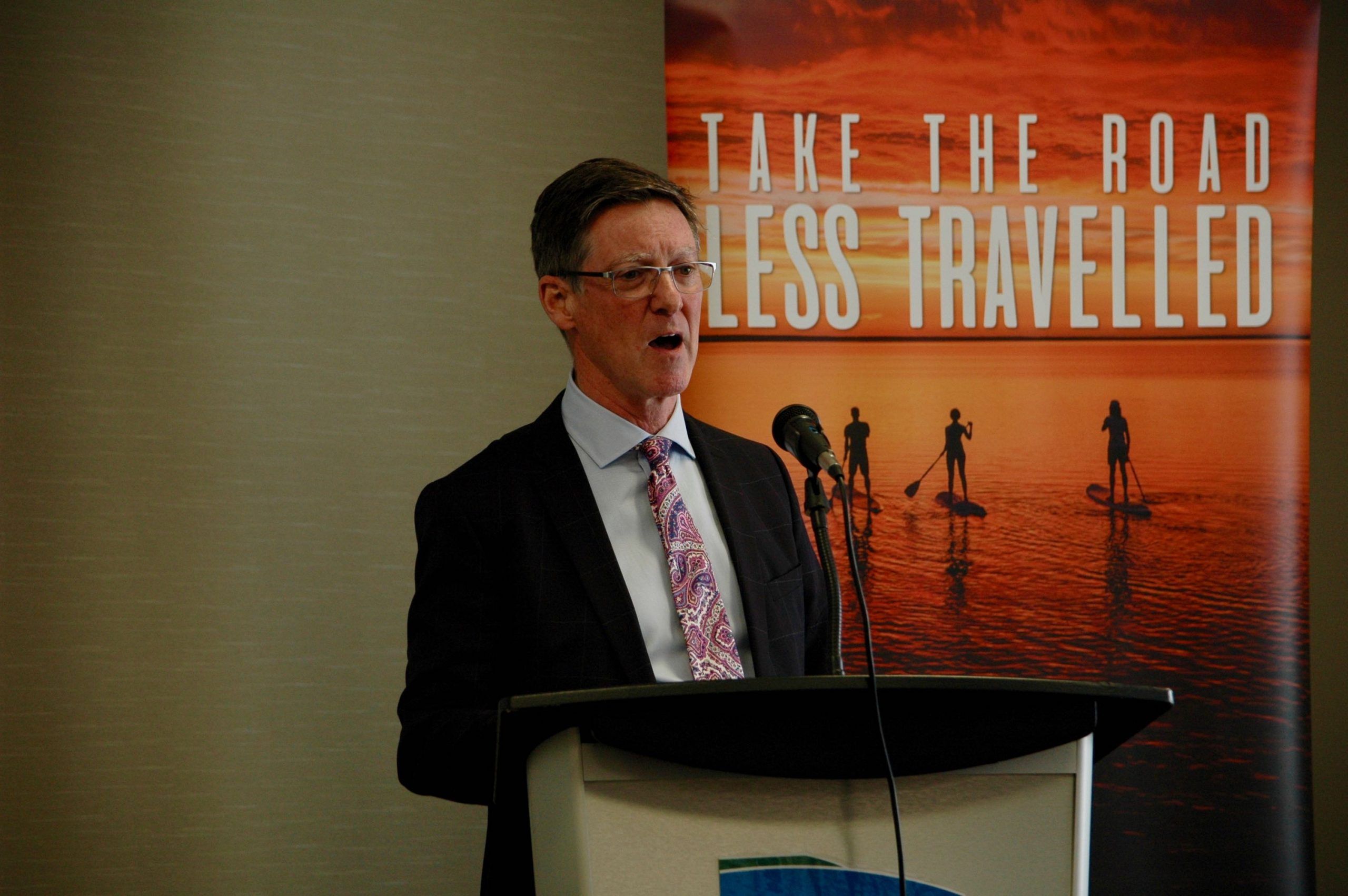 Owen Sound Mayor Ian Boddy confirmed in an interview Friday he will be seeking re-election as mayor.

But the subject didn’t arise during his keynote remarks at an Owen Sound & District Chamber of Commerce luncheon Friday, or in questions people there asked, at what was billed as a State of the City address.

Boddy spoke at length about the city’s recently refreshed strategic plan, which he mostly read from a prepared text, and detailed many city accomplishments and opportunities ahead.

Owen Sound ranks near the highest in terms of tax paid per capita among similar communities and Boddy acknowledged residential tax rates have “a long way to go.” City commercial taxes are “mid-level” and industrial rates are “low” in similar comparisons.

He said the city’s fortunes have started to turn, as indicated by a reversal of small population declines since 2016, thanks to an estimated 3.5 to four per cent gain in 2021, and with opportunities green energy presents the city for jobs and tax base growth needed to provide city services.

“The city of Owen Sound is poised to be a leader as part of the Clean Energy Frontier,” which is what the combined Grey, Bruce and Huron counties has been dubbed in relation to the businesses drawn here to supports Bruce Power’s rebuild and future.

He said Owen Sound is “quickly getting the reputation for being able to attract and support new innovative and green businesses that are using the latest technology . . . and there’s potentially more coming,” Boddy said.

The mayor touted the benefits of TC Energy’s Meaford pumped storage proposal and Bruce Power’s economic contributions to this area, including its development of markets for isotopes, which he learned details about at a recent nuclear conference.

He said he learned more about the pumped storage plan, which still is years away if it gets federal and provincial environmental approvals, during a meeting he asked for with TC Energy. It would create 1,000 jobs over an eight-year period, he said.

TC Energy will present its plans to city council and to a city committee, he said. The company proposes to pump water out of the bay when electricity prices are lower, then release it back through turbines to generate power when it’s needed.

One woman at the luncheon told Boddy she doubted that fish wouldn’t be impacted by the project, despite Boddy’s strongly stated belief that the design would draw water so slowly that fish could simply swim by.

Discussion of climate change has changed, he said. About 10 years ago there was an “outcry that our economy would collapse if we ever got off of carbon-based, petroleum-based fuel. There would be a loss of jobs, it would all fall apart.”

Now green energy is considered an economic driver, he said.

“Green energy is thriving, with Bruce Power producing clean energy in our backyard, and rapid advances and emerging technology. And it’s right at our doorstep. We cannot get to net zero without clean nuclear energy . . .”

“The clean energy sector in our region contributes over $4 billion to the provincial GDP. In Bruce, Grey and Huron counties alone, it contributes almost as much as the entire motion picture industry in the province of Ontario.

“The employment it provides, the new residents that it attracts, supports the whole economy through household spending.”

He cited Hydrogen Optimized, which is innovating hydrogen production from water using high-current electrolysis technology in part of the former Tenneco factory in Owen Sound. It recently signed a memorandum of understanding to built a manufacturing plant for its energy cells in Texas.

Boddy noted Makwa-Cahill, in the city’s former Leon’s furniture building, is making components for Bruce Power’s rebuild and others firms and is involved with TC Energy’s pumped storage project.

And he cited BWXT, in part of the former PPG plant, which does maintenance and makes components for Bruce Power, while also managing isotopes for the Darlington nuclear station.

Afterwards, Boddy confirmed a report that he would seek re-election, but was reticent in an interview to talk at length about it until he’s ready. He noted the election is almost six months away.

But he said the reason he’s running is there’s more to do to “get development, draw development to the city,” he said. “We’ve started to get the housing, now we’ve got to get the jobs.”

He told the gathering by his count there are some 2,500 new housing units either in construction or working through the approvals phase in Owen Sound.

Coun. Richard Thomas announced his intention to run for mayor this week. The official nomination period opened Monday. Elections are on Oct. 24.