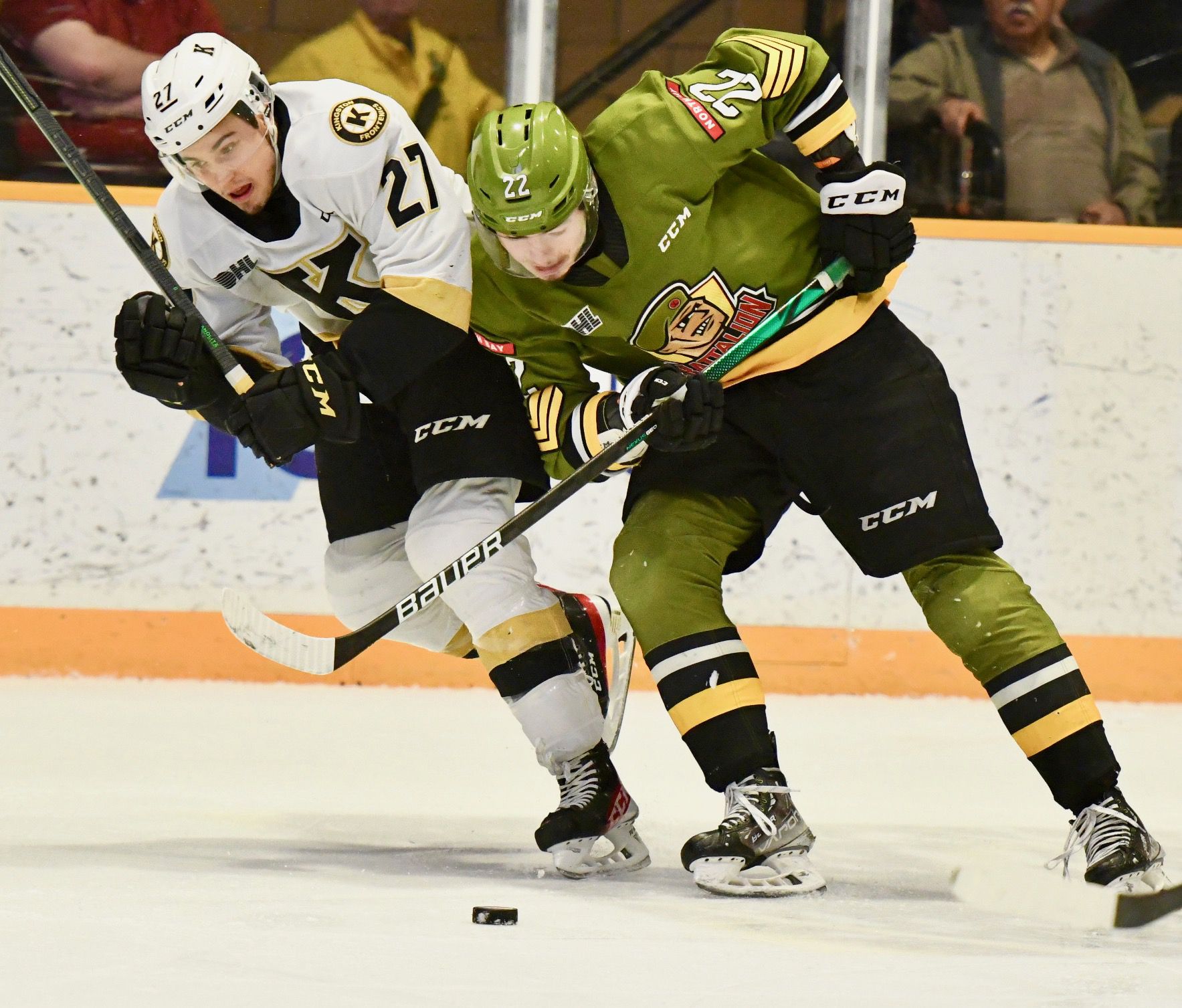 Francesco Arcuri scored at 16:36 of overtime to lift the Kingston Frontenacs to a 5-4 victory Sunday over the North Bay Battalion, tying the teams’ Ontario Hockey League second-round playoff series at one game each.

Mitchell Russell and Brandon Coe each contributed one goal and one assist and Anthony Romani and Matvey Petrov also scored for North Bay, which erased deficits of 3-0 and 4-3. Starting goaltender Joe Vrbetic gave up three goals on 10 shots, while Dom DiVincentiis allowed two goals on 25 shots before 2,440.

The Battalion won the opener 6-4 Friday night. The series shifts to Kingston for Game 3 at 7 p.m. Tuesday and the fourth game Thursday night.

In overtime, Arcuri took a feed from Luke Peric at centre ice, cruised unimpeded across the blue line and slipped to the left-wing circle before snapping the puck past DiVincentiis. It was Arcuri’s fourth goal of the playoffs.

Petrov scored on the power play at 5:35 of the third period for a 4-4 tie. Coe sent a cross-ice pass to the Russian import in the left circle, and he one-timed the puck home for his first postseason goal. Ty Nelson also assisted.

Soto struck 38 seconds into the period to give Kingston a 4-3 lead. Arcuri and Shane Wright were foiled on a two-man break-in, but Soto arrived as the trailer to pop the puck behind DiVincentiis.

The Battalion scored two unanswered goals in the second period to tie it 3-3. Coe collected his fifth goal at 3:17, tapping the puck home at the right post after a left-point shot through traffic by Nelson, with Russell drawing the other assist.

The forechecking Dalyn Wakely stripped Murray of the puck and eluded Peric, with Romani arriving to grab the loose disc and slip it between Merilainen’s legs at 6:42.

Kingston scored three goals in a span of 4:56 in the first period, sparked by Murray at 3:06. Defenceman Murray slipped a soft backhander between the legs of Vrbetic, with assists to Arcuri and Paul Ludwinski.

Soto converted the rebound of a Jordan Frasca shot at 7:45, and Chromiak walked unchallenged across the crease from the left wing for his third goal 17 seconds later, prompting Battalion coach Ryan Oulahen to replace Vrbetic with DiVincentiis.

Russell replied with his team-leading eighth goal unassisted at 13:06, beating Merilainen to the glove side with a rising snap shot from the right circle.

The games at Kingston can be seen live in North Bay on YourTV Channels 12 and 700.

BATTALION BULLETS: The Battalion has an all-time won-lost record of 12-22 in playoff overtime games … The Battalion is 14-21 in the second game of a postseason series, including 9-13 at home. The Troops are 3-3 in second games at Memorial Gardens since relocation from Brampton in 2013 … Liam Arnsby was struck in the face by the stick of Kingston’s Zayde Wisdom late in the first period before an eventual whistle was followed by a video review, resulting in a double minor. The bleeding Arnsby left for the dressing room but returned for the second period … Russell has at least one point in all six playoff games, scoring eight goals and earning six assists for 14 points … Nelson paced the Battalion with seven shots on goal. Soto and Chromiak led Kingston with five apiece … North Bay went 1-for-4 on the power play. Kingston was 0-for-2 … The Battalion scratched Cam Gauvreau and Nic Sima… Kingston was without Gage Heyes, Mitchell Brooks, Nathan Poole, Quinton Burns and Maddox Callens … Duncan Schneider drew into the lineup in place of Brooks as Kingston dressed 11 forwards and seven defencemen, with Alec Belanger playing centre … Arcuri has a four-game points streak in which he has three goals and four assists for seven points … The on-ice officials constituted a 4-H club, as Mike Hamilton and Ryan Harrison were the referees and Adam Harris and Tommy Hughes worked the lines.