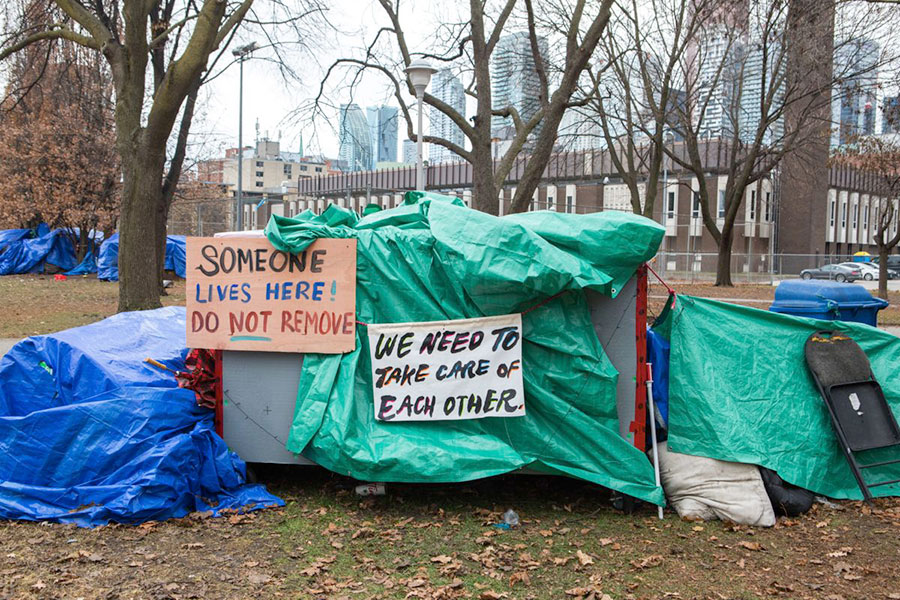 Firefighters say it’s against City by-laws and that folks should avail themselves of the shelter system as a safer option to living outside. But what are encampment residents to do when they’ve been turned away because the shelter system is full?

The City’s zero-tolerance approach to fires in encampments has led to more hidden and unsafe practices by unhoused people. It’s also led to freezing deaths. At least three unhoused people have died because of the cold weather in Toronto so far this winter.

On May 1, 2020, Adam Robinson, died in an encampment fire. He was 35. Earlier this month, also marked the one-year anniversary of the death of another encampment resident found inside a tiny burning shelter at Power Street and Adelaide. The cause of the fire and death is unknown. The Ontario Fire Marshal has yet to release a report on its investigation. All we know is the victim’s first name: Gordon.

Two days after Gordon’s death, on February 19, 2021, the City issued a press release announcing Gordon’s death and noting that it had filed an injunction against Khaleel Seivwright, the carpenter who had been building tiny shelters like the one Gordon died in for unhoused people.

The wood structures brought relative safety and warmth to people living in parks. The City was trying to force Seivwright to stop placing or relocating the shelters on City property. Only, the injunction was filed seven days prior to Gordon’s death. City e-mails obtained through Freedom of Information (FOI) suggest that City media relations staff were eager to spin Gordon’s death to justify its injunction against Seivwright.

When it comes to encampment fires, the City has embarked on a relentless public relations campaign. Encampments being unsafe because of fires has been integral to the City’s rationale for clearing encampments.

For months leading up to several violent mass evictions of park encampments nearly every media release about the encampments from the City said there were 253 fires in 2020. Yet, these were “fire response calls.” In other words, response to a suspected uncontrolled fire, whether or not it was an emergency. The number of actual “fire incidents,” those that actually required putting out, was almost half of that.

There have been other deaths of unhoused people attributed to encampment fires in Toronto. Grant “Gunner” Faulkner died in 2015 while trying to keep warm on a night when the temperature dipped to at or below -15℃.

Grant’s death led to a Coroner’s Inquest and 35 recommendations from a jury. While different levels of government have taken partial actions on the recommendations, they have never been fully implemented. These include calling on the City of Toronto to change its policies to provide ‘survival supplies’ and fire safety information to unhoused people. Examples of survival supplies include fire retardant blankets and safe heat sources.

But there has been no action on many of the recommendations, including that the Ontario Fire Marshal “develop fire safety tips targeted toward homeless people that identify risks and best safety practices.” The OFM claims the “intent” of the recommendation is already in place, but no such tips have been developed in consultation with unhoused people and service providers. Toronto Fire Services currently distributes a fire safety information sheet in encampments, but this sheet does not meet the Faulkner recommendations. In essence, it is a list of “don’ts”; it provides no helpful information about how to safely use fire.

The OFM says that “providing fire safety tips specifically for homeless persons would appear to be condoning unsafe fire behaviours.” In response to questions for this article, TFS told us that distributing fire safety equipment would give people “a false sense of security” and that they “cannot recommend a safe way for people to live outdoors” even as the OFM and TFS’s approach is not working.

We can all agree that living outside, especially during winter, is not ideal. Yet unhoused people often have no choice with a shelter system that’s in crisis.

An attempt in January 2021 by City Councillor Mike Layton to further implement the Faulkner recommendations in January 2021 would have identified “appropriate fire safety equipment” for City outreach workers to distribute to encampment residents. But his motion was adamantly opposed by Acting Fire Chief Jim Jessop and Deputy City Manager Tracey Cook and never made it to the committee stage for debate.

Meanwhile, other cities have been taking action with preventative fire safety measures. Vancouver hands out fire extinguishers, sand, and fire retardant blankets to encampment residents. In Winnipeg, barrels are provided for safer controlled fires. Both cities have similar bylaws to Toronto, yet these cities’ efforts show a willingness to move beyond the red tape and prioritize harm reduction measures that help save lives.

In the absence of the City taking appropriate measures, Toronto community members have stepped up and brought harm reduction informed fire safety training and materials to encampment residents. As part of the training sessions, we have been giving out fire blankets, fire extinguishers, and first-aid kits donated by the community.

We know that fire-safety training works. We also know there is much more to do, both in terms of burn prevention and housing advocacy. The City of Toronto must implement the SHJN’s Winter Plan. The City could help by honouring Grant Faulkner’s memory and acting on the recommendations of the Faulkner Inquest, which includes building a memorial to honour Faulkner’s death.