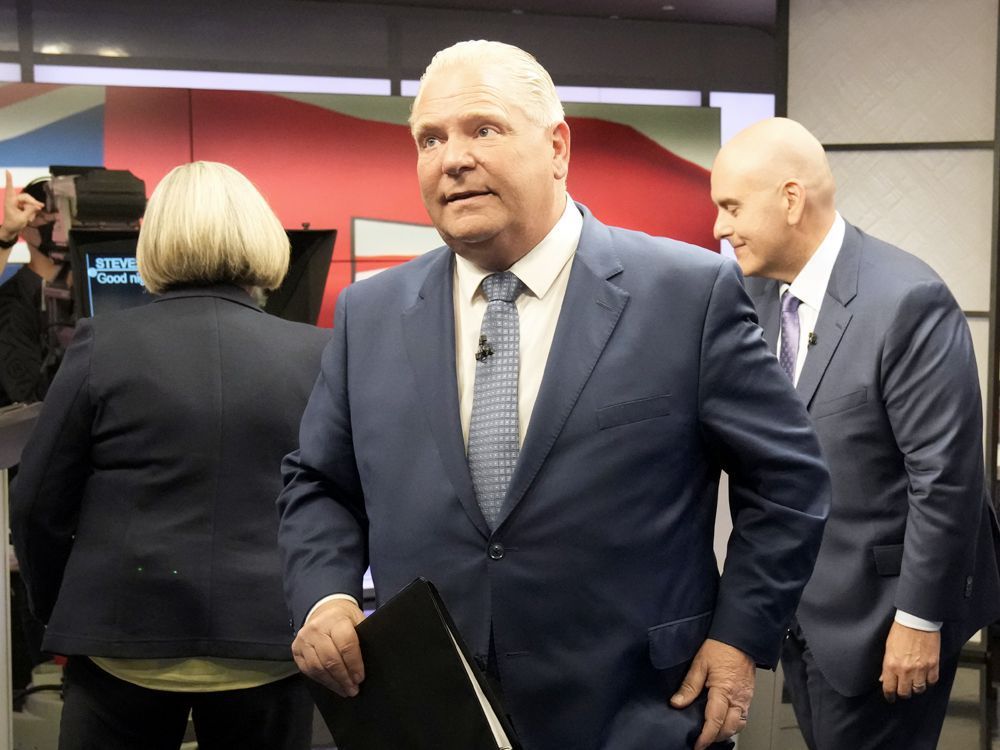 The race for Queen’s Park is underway and Postmedia is here to provide wall-to-wall coverage in advance of the June 2 vote. Our daily liveblog will keep you posted on the latest happenings on the campaign trail as the party leaders travel the province in search of votes.

The pundits saw no clear winner in Monday night’s important TV debate among four party leaders, but the Greens are certainly buoyant following the live performance of their leader, Mike Schreiner.

Hoping to build on Monday’s momentum, Schreiner was focused Tuesday on two ridings where the Ontario Green Party sees the most potential for growth. A youth and climate announcement was scheduled in Toronto’s University-Rosedale riding, with star candidate Dianne Saxe, the province’s former environmental commissioner. An announcement on housing was to follow in Parry Sound-Muskoka.

Both ridings were mentioned in the televised debate, with Schreiner chiding Ford for having “fired the wrong environment commissioner” by letting Saxe go. As the incumbent Guelph MPP, Schreiner said the sole Green member at Queen’s Park has “punched well above his weight over the last four years and I need more Green MPs.”

The same night as Progressive Conservative leader Doug Ford was facing off against three more progressive opponents at a televised leaders’ debate, about 70 supporters and members of the public gathered at a London legion hall for a meet-and-greet with New Blue Party candidates from four London area ridings.

Among other campaign promises, New Blue is pledging to end all remaining COVID-19 mandates, take down wind turbines to reduce electricity prices and drop the HST rate from 13 per cent to 10 per cent. Opposition to rolling public health restrictions and successive lockdowns during the pandemic loomed large in the candidates’ prepared remarks.

The New Blue Party has candidates in all 124 ridings provincewide. The party is vying for votes on the right of the political spectrum, but also looking to attract voters who are tired of the status quo, said Tommy Caldwell, New Blue candidate for London North Centre.

Ontario’s “broken down” schools — numbering in the thousands, according to the NDP — is the campaign focus Tuesday for party leader Andrea Horwath, who has pledged $4.8 billion over the next three years to fix classrooms, including $467 million to add an extra custodian for each school.

Horwath was scheduled to announce details of the NDP’s “plan to fix our schools” at campaign stopovers in Scarborough in the morning and in Peterborough in the afternoon.

With Ontarians going to the polls in just over two weeks, Monday night’s second and final debate with the leaders of four main parties was likely the last chance for any premiership hopeful to make a big splash with voters.

According to the pundits, it was not to be.

The National Post’s Chris Selley wonders why, if things in Ontario are as dire as the opposition parties suggest, why don’t they just merge to get rid of Ford given they “seem to agree on pretty much everything.” Even though “Ford’s re-election pitch is hardly compelling,” Selley argues the opposition leaders failed to make a compelling case for a change in government. Meanwhile, he claims, voter interest in this provincial election is “seemingly very low.”

For a debate breakdown on winning moments, surprises and disappointments, four longtime election observers weigh in on the performances of the four party leaders in the Ottawa Citizen: ‘Who won the final 2022 Ontario election debate?’