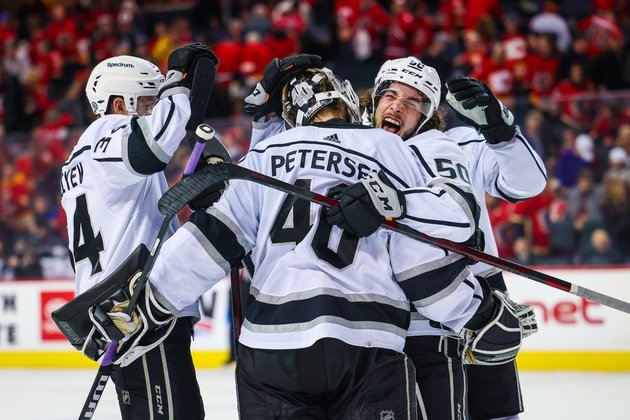 While the Los Angeles Kings aim to improve their playoff position in the Western Conference, the Winnipeg Jets just want to be included in the postseason picture.

Looking to build on an impressive victory, the visiting Kings try to avoid a third straight defeat this season to the desperate Jets on Saturday night.

Los Angeles (37-23-10, 84 points) rallied for a 3-2 shootout victory at Calgary on Thursday to cut its deficit against the Pacific Division leader to five games. After opening March with a 4-3 loss at Dallas, the Kings went 8-4-3 the rest of the month.

“The West is really tight, and we’ve got to earn every (bit of) ice there is out there,” said Kings forward Viktor Arvidsson, who recorded his 19th goal Thursday. “It’s fun to play.”

While the Kings have enjoyed themselves during a season that will likely result in their first playoff appearance since 2018, they haven’t had any success versus Winnipeg (33-26-10, 76 points). Los Angeles has dropped a pair of 3-2 contests to the Jets over the first two months of the season, most recently in overtime at Winnipeg on Nov. 13.

That success could give the Jets confidence as they continue their push to the postseason, and try to rebound from a frustrating 7-3 loss at Toronto from Thursday. Goals from Blake Wheeler and Paul Stastny gave Winnipeg a 2-0 lead less than eight minutes into the contest, and it led 3-2 early in the second period before the Maple Leafs scored five unanswered.

Though the Jets, a playoff participant for four consecutive years, are 11-5-1 since Feb. 27 and haven’t lost consecutive games in regulation since Feb. 19-21, they’re still just outside playoff position in the West. Winnipeg’s margin for error is slim during the final weeks of the regular season.

“We’re in a spot where we need to win games, and besides playoffs this is the toughest time of the year,” said forward Nikolaj Ehlers, who scored his 21st goal Thursday.

“Wins are not easy to get, so we need to just continue grinding.”

Ehlers has eight goals with seven assists in 15 games since missing nearly two months with a lower-body issue. He’s totaled eight points in his last six versus Los Angeles. Meanwhile, Wheeler has three goals and six assists during a seven-game point streak.

Kyle Connor, Winnipeg’s points leader with 41 goals and 41 assists, has five goals with an assist in his last five home games against the Kings.

Los Angeles’ Cal Petersen made 26 saves Thursday at Calgary to bounce back after allowing six goals to Seattle on Monday. Teammate Jonathan Quick has a 3.06 goals-against average during his current 3-2-2 starting stretch.

The Kings’ Adrian Kempe has three goals with four assists in his last eight games. He scored one of his career-high 28 goals in a home loss to the Jets on Oct. 28.