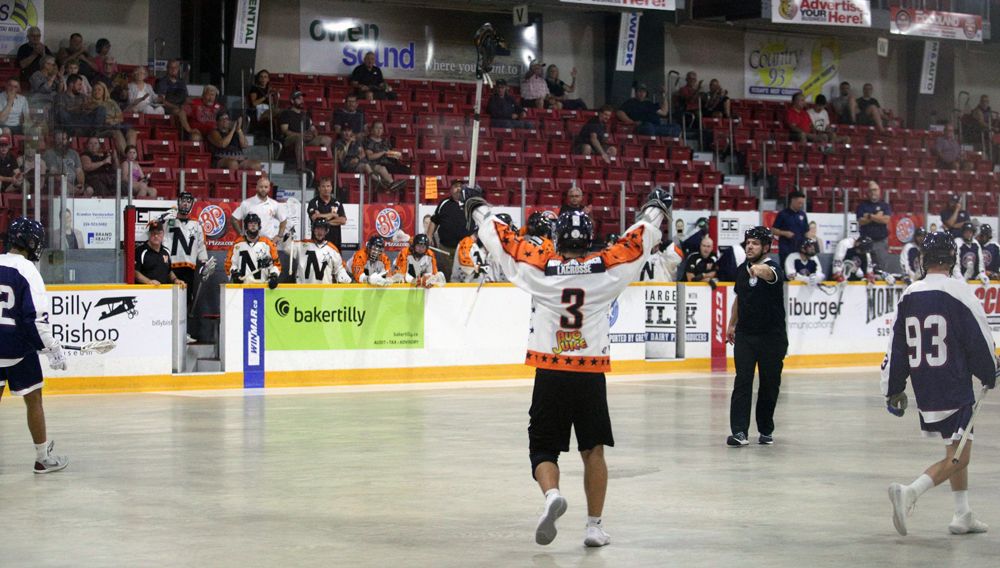 “I grew up with Nick Rose teaching me when I was 11 and 12 years old,” Kells said. “Just battling against someone of his calibre and his pedigree is just a wish within itself. To be able to come out and win I think is a testament to our team and how hard we can work,” Kells said.

The Owen Sound Bug Juice North Stars made good with home-floor advantage Saturday night winning 8-7 over the Rock in Game 1 of their Ontario Series Lacrosse semifinal.

Kells was stellar in net once again for the North Stars, but he gave the credit to the effort shown on the floor in front of him by his teammates in the orange-and-white.

On a hot and humid day, the North Stars battled for a full 60 minutes in a nail-biter of an opening game. It’s also a confidence booster for the club. Despite finishing as the third-seed, many view the Oakville Rock as a favourite in the series.

The Rock slid down the standings because of an Ontario Lacrosse Association ruling after unknowingly using an ineligible player. They’re also buoyed by players from the Major Series Lacrosse senior A circuit, who joined the lower-tier league when Oakville pulled out of the MSL this year.

Rob Kloepfer took that message to heart in the first period.

After the North Stars jumped out to a 3-0 lead in the first period, Kloepfer spent nearly 15 seconds of the 30-second shot clock killing a penalty while being worked over along the sideboards by several Oakville players.

The siren sounded as the shot-clock hit zeros and Kloepfer emerged from the mass of bodies with his jersey half pulled over his back, his body bent over, and the ball still in his stick. The crowd applauded the blue-collar effort.

Oakville stormed back in the second half of the opening frame – not easily deterred – and managed to tie the match 3-3 after the first 20 minutes.

“They’re a good team down there. We knew there were going to be peaks and valleys,” Kells said. “It’s just about managing those valleys and maximizing those peaks.”

Oakville took their first lead of the game early in the second period, but Owen Sound responded as youngsters Jake McNabb and Mike Fiegehen went to work in the offensive end. After 40 minutes, the N’Stars led the Rock 6-5.

In the third period, after trading goals, Owen Sound scored to take a two-goal lead which they held into the final minute of the game.

Andrew Kew’s goal with just under 30 seconds left on the clock made it a one-goal game and raised the tension inside the sweltering Bayshore.

“I was feeling pretty good,” Kells said of the pressure cooker of a situation. “I like the defensive unit we put out there, we had a good game plan and we executed . . . it worked out to perfection.”

Owen Sound was able to get the ball back and call a timeout, effectively sealing the game.

McNabb and Fiegehen each had a pair of goals in the contest while Dan Keane, Pat Saunders, Jordan McMillen, and Tyler Halls each scored. Halls’ goal proved the game-winner.

The two clubs head to Oakville for Game 2 Sunday inside the Toronto Rock Athletic Centre. Game time is set for 7 p.m.