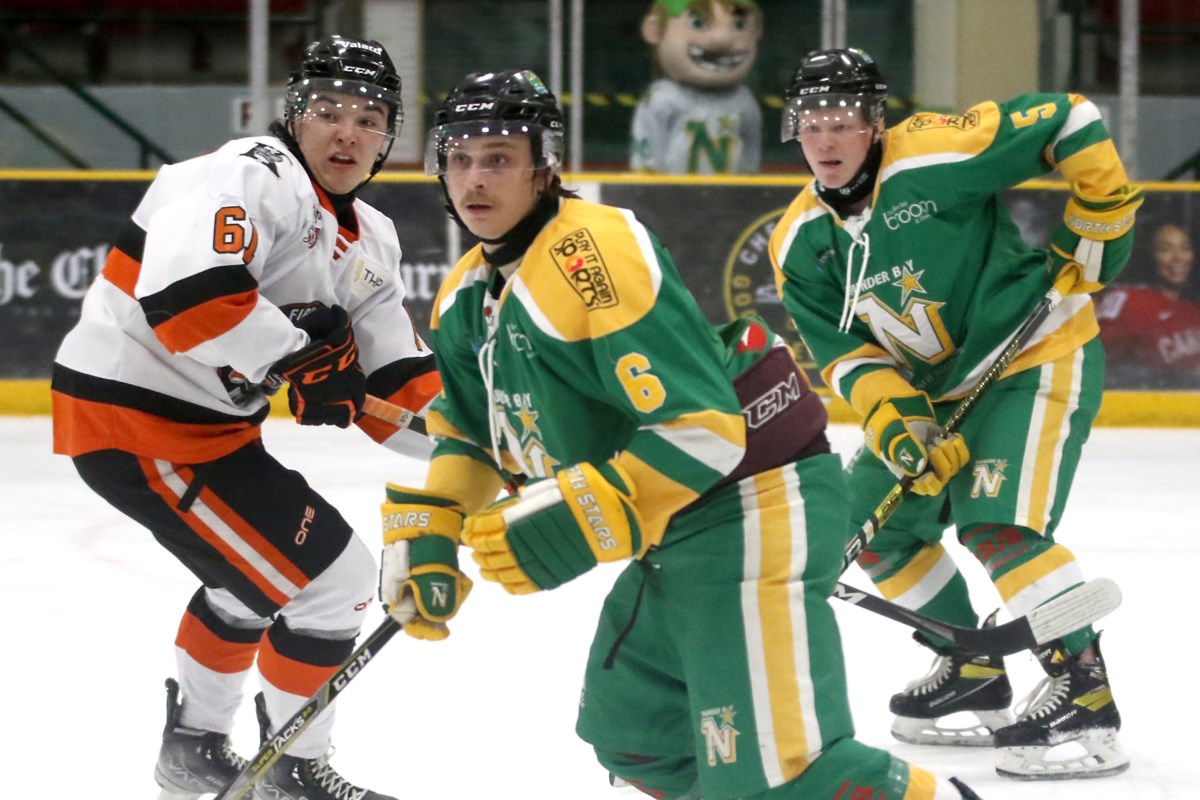 It was just the second time Thunder Bay has beaten Kam River in seven meetings this season.

He finally got one on Friday night. It wasn’t pretty, a goal-mouth pass that caromed off the skate of Kam River Fighting Walleye forward Even Enegren and into the net.

But it was enough to erase a string of zeroes five rows deep on his Elite Hockey Prospects profile, dating back to his time with the Brockville Braves U18 squad in 2017-18. More importantly, it was the go-ahead goal in Thunder Bay’s 5-2 win over the visiting Kam River Fighting Walleye, a win that temporarily kept their hopes of overtaking the Dryden Ice Dogs for third place in the SIJHL standings.

Those dreams were dashed about an hour later, when Dryden picked up the point they needed to stave off the Stars (21-15-4), blanking the Wisconsin Lumberjacks 3-0.

It’s about time, said Young, who has spent the past three seasons in Thunder Bay.

“I didn’t know I scored. I thought someone else scored, so at first I was like, ‘Did I score? Did I score?’ But honestly, it was just a great feeling. It’s been a long time since I felt the greatness of scoring a goal,” said Young, a part-time player with the Stars who fills the rest of his time studying geology at Lakehead University.

Young wasn’t even supposed to play this week, but with the Stars down seven regulars due to injury and suspensions, the Maitland, Ont. native jumped at the chance when Thunder Bay coach Rob DeGagne rang him up as an emergency fill-in.

“It’s a great feeling just coming out and being able to help when I can,” the 20-year-old said. “I don’t play very often … so just being able to come out and support and help get them the win is amazing.”

DeGagne, whose team is now locked into fourth and slated to take on Wisconsin on Tuesday to open the SIJHL playoffs, said Young has been a great soldier all season long.

“He hasn’t really played a lot of games for us because he’s going to be a geologist, you know. That’s his first junior goal and it couldn’t have come at a better time and we’re really happy for him. He’s such a good character kid for us.”

Young’s goal was the first of three the Stars would score in a 4:10 span in the second period, breaking open a 1-1 game midway through the middle stanza, after  Mason Wesley opened the scoring for Thunder Bay at 6:25 of the first and Holden Woodcroft knotted things up three minutes later with his 10th goal in 15 games.

Noah Broughton, who drew an assist on Young’s tally, beat Kam River goaltender Eric Vanska at the 11:35 mark, then, less than two minutes later, Pier-Luc Bellard hacked away at a loose puck in the Fighting Walleye crease area to make it 4-1 Thunder Bay.

Kam River got one back on the power play late in the period, Trenton Morriseau going five-hole on North Stars goaltender Jordan Smith, who made 38 stops on the night in front of a season-high 1,158 fans at Fort William Gardens.

The Fighting Walleye had a pair of early power plays to open the third, but couldn’t convert and Drew Caddo put it away, blasting a shot over Vanska’s shoulder with 1:17 to go in regulation.

The game took a bit of an ugly turn in the final frame, Thunder Bay’s Drew Meloche and Kam River’s Trystan Goodman going toe-to-toe, both players ejected for their efforts.

The North Stars outshot the Fighting Walleye 42-40 on the night and will look to close out the SIJHL regular season by completing the weekend sweep against their Thunder Bay-area rivals.

The Fighting Walleye (34-7-2) have locked up top spot and earned a first-round bye, awaiting a possible playoff date against the fourth-place stars in the second round of the playoffs.