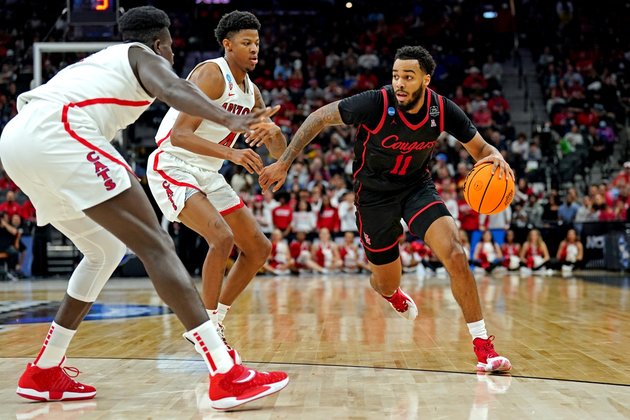 The Cougars (32-5) will play second-seeded Villanova on Saturday in the Elite Eight. Villanova beat 11th-seeded Michigan 63-55 in the first South semifinal Thursday.

Houston never trailed in the slugfest, earning a six-point lead at halftime via its defense and holding off the deeper Wildcats in the second half with timely 3-pointers from Shead and Edwards.

Arizona got to within two points twice in the first six and a half minutes, but the Cougars shrugged off the Wildcats, eventually building a 61-49 advantage after two free throws by J’wan Roberts with 7:10 to play.

The Wildcats closed the gap to six points with 2:12 remaining before Edwards produced his back-breaking 3-pointer to all but cement the win.

Houston swarmed the Wildcats in the first half, holding Arizona to 28 percent shooting while building a 34-28 lead at the break. The Cougars roared to a 14-4 lead six minutes into the game after a driving layup by Edwards that capped a 7-0 run.

The Wildcats closed to within four points on two occasions, the latest via a pair of free throws by Terry with 7:01 to play in the half.

Houston stretched the margin back to 10 points and was up 34-26 before two free throws from Koloko with 0.6 seconds left brought Arizona to six points at halftime.

Shead, Edwards and Carlton scored six points each to lead a balanced Cougars attack in the half. Houston shot 44.8 percent despite making just 3 of 12 shots from beyond the arc. But the Cougars ruled the lane, scoring 18 points in the paint.

Arizona was paced by Terry’s eight points before halftime; the Wildcats made more 3-point shots (4) than two-point baskets (3) in the half.