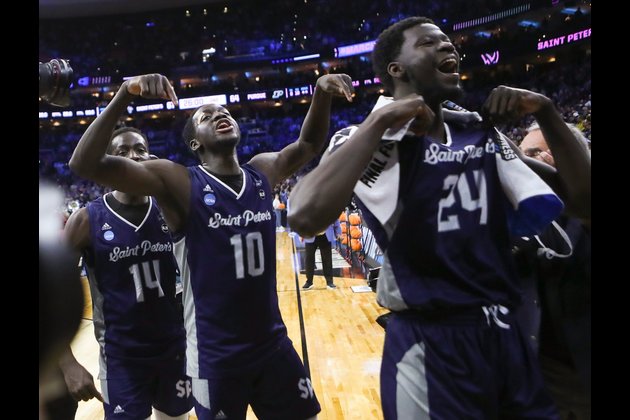 PHILADELPHIA — Daryl Banks III hit critical late-game baskets on his way to 14 points, and the Saint Peter’s Peacocks took down third-seeded Purdue 67-64 in an East Region Sweet 16 game Friday to become the first team in NCAA Tournament history to make the Elite Eight as a No. 15 seed.

Saint Peter’s overcame Purdue star Trevion Williams’ 16 points and eight rebounds. The Peacocks (22-11) once again applied their aggressive defense and forced 15 turnovers before outshooting the Boilermakers down the stretch. Saint Peter’s next will face North Carolina, which defeated UCLA later on Friday.

“When you play against teams like that, who’s ‘supposed’ to win, right, when you keep it tight, certain things can happen,” Peacocks coach Shaheen Holloway said. “We kept battling. I knew the ball was going to bounce our way, and it did.”

Philadelphia native Clarence Rupert scored all 11 of his points in the first half for Saint Peter’s. Doug Edert added 10 points for the Peacocks. Zach Edey and Sasha Stefanovic posted 11 points apiece for Purdue (29-8) and Mason Gillis chipped in 10.

PHILADELPHIA — Caleb Love nailed the game-tying and go-ahead 3-pointers during the final 100 seconds as the Tar Heels downed the Bruins in a Sweet 16 game.

Love exploded for 27 of his career-high 30 points in the second half to deliver North Carolina (27-9) another NCAA Tournament win in Hubert Davis’ first year as head coach. The Tar Heels will face Cinderella No. 15 seed Saint Peter’s on Sunday in the Elite Eight.

Kansas (31-6) advances to meet 10th-seeded Miami in the regional final on Sunday afternoon. The victory was No. 2,534 in Kansas program history, snapping a tie with Kentucky for the most in college basketball.

CHICAGO — Kameron McGusty scored 27 points to lift the Hurricanes over the Cyclones in their Sweet 16 matchup.

Miami (26-10) advances to the first Elite Eight in program history after winning for the sixth time in the past seven games. The Hurricanes will face top-seeded Kansas in the regional final on Sunday with a trip to the Final Four on the line.

Jordan Miller had 16 points and Sam Waardenburg added 13 points and eight rebounds for the Hurricanes, who finished in fourth place in the Atlantic Coast Conference. Gabe Kalscheur and Tyrese Hunter paced the Cyclones (22-13) with 13 points apiece on Friday, while Izaiah Brockington followed with 11.