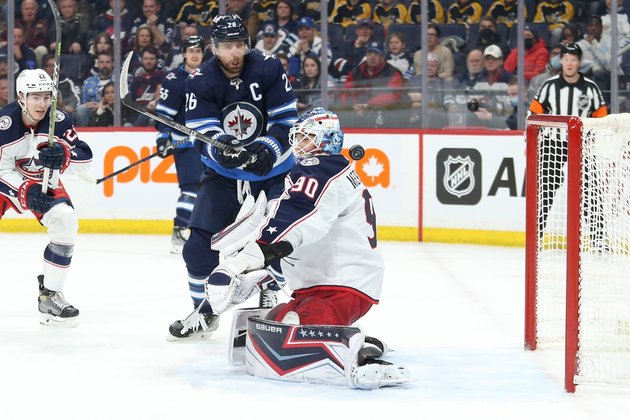 A big save from Jets goalie Eric Comrie set up a breakaway for Ehlers, and the forward made no mistake for his 20th goal of the season. Six of those goals have come over Ehlers’ past seven games.

The win brought the Jets within three points of the Dallas Stars in the congested race for the final Western Conference wild-card spot.

The Jets thought they had the game clinched in regulation on an empty-net goal with 20 seconds remaining, except the goal was waved off due to a slashing penalty on Josh Morrissey earlier in the play. Oliver Bjorkstrand scored just six seconds into the Blue Jackets’ ensuing power play, equalizing the score and forcing overtime.

Kyle Connor and Dominic Toninato each had a goal and an assist for Winnipeg, and Morrissey scored the Jets’ other goal. Connor has 20 points (eight goals, 12 assists) during a career-high, 10-game points streak.

Comrie stopped 33 of 36 shots. The Jets’ backup goalie has an impressive 8-2-1 record and a .920 save percentage this season.

Adam Boqvist and Brendan Gaunce scored for the Blue Jackets, who are 1-2-1 in their past four outings.

Toninato produced the first multi-point game of his five NHL seasons. The forward ended a 13-game points drought with his tip-in goal at 7:14 of the first period.

Both teams scored during a Columbus power play later in the frame. After Connor’s short-handed marker at 12:30, Boqvist responded with a goal 31 seconds later to salvage something for the Blue Jackets with the man advantage.

Gaunce tied the game 2-2 at 3:22 of the second period. Morrissey’s power-play goal with 31 seconds left in the middle frame put the Jets back on top.

An upper-body injury forced Winnipeg’s Jansen Harkins out of the game. Harkins left the ice after sustaining an injury in the first period, then briefly returned for another minute of play in the second frame before being ruled out of action.