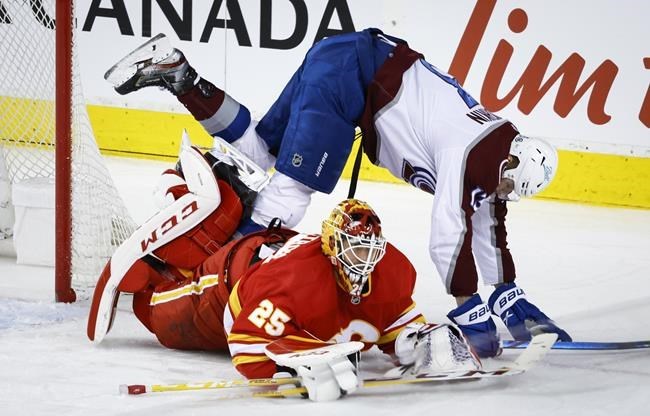 Colorado (47-14-6) won the season series 2-1. The Avalanche did so without Nathan MacKinnon (lower body), their captain and leading scorer who was hurt in a third-period fight with Minnesota’s Matt Dumba on Sunday.

Tyler Toffoli scored for Calgary (40-18-8), which is 2-2-0 on a six-game homestand that continues Thursday when Los Angeles visits the Saddledome. The Kings are second in the Pacific, seven points behind the Flames.

After going winless in his two previous starts, Kuemper improved to 31-9-3.

With the score tied 1-1, Colorado capitalized on a tripping penalty to Elias Lindholm halfway through the third period. Mikko Rantanen spotted Nichushkin in front and sent a perfect pass across the slot that Nichushkin steered behind Markstrom.

Colorado’s power play has been lethal of late. The unit converted two-of-three chances and is 15-of-36 over the Avalanche’s last 12 games (41.7 per cent).

Meanwhile, Calgary’s penalty kill struggled for a second straight game. Before then, the Flames had allowed five power-play goals on home ice in 32 games (a total of 86 chances).

But Calgary has now surrendered five power-play goals in its last two games.

Calgary has also been rolling with the extra man of late, entering the night 4-for-12 in the previous four games. But the Flames could only convert one-of-six chances against Colorado, including two opportunities in seven minutes of the third, both on Kadri penalties. The latter came with 16 seconds remaining.

The Flames opened the scoring at 9:31 of the second, capitalizing on a two-man advantage. They secured the 5-on-3 when Nichushkin got his stick into the hands of Rasmus Andersson 18 seconds into the first power play.

The Flames controlled possession, but weren’t able to generate any good chances initially. But eventually Andersson sent a pass across that Toffoli one-timed inside the goalpost from 30 feet out.

The lead lasted less than five minutes as the Avalanche responded with a power-play goal of their own. With Milan Lucic off for interference, Colorado tied it at 13:46 when Cale Makar’s shot deflected in off Nichushkin, who was screening Markstrom.

In a scoreless and mostly uneventful first, the best chances came from Calgary in the final minute via the game’s first power play. But Kuemper made four saves, which included stopping Tkachuk at the side of the net.

Notes: Sean Monahan returned to the lineup for Calgary after being a healthy scratch the past two games… Trade deadline acquisition Arturri Lehkonen made his debut for the Avs. He centred a line with Andre Burakovsky and Alex Newhook… Colorado D Samuel Girard (lower body) missed his ninth game, but he’s back skating now.

This report by The Canadian Press was first published March 29, 2022.