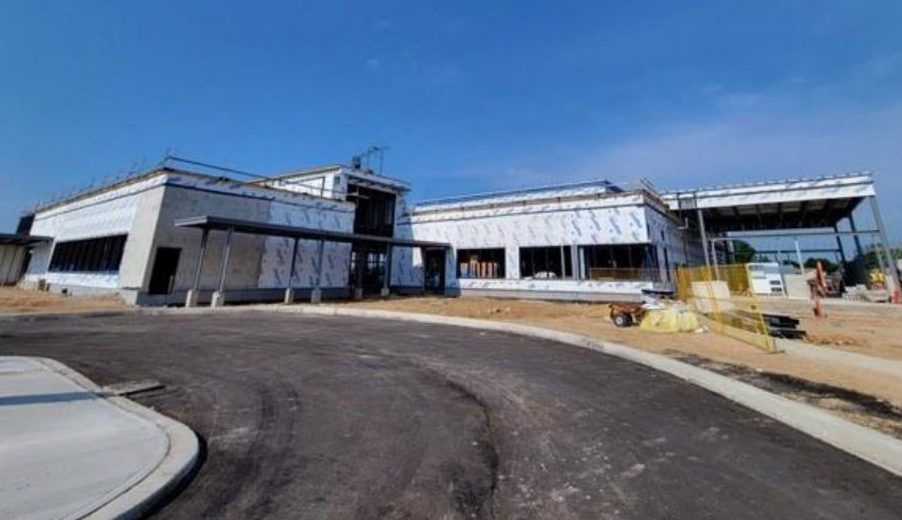 Construction of the new hospital in Markdale is now about 60 per cent complete, with the facility expected to be open to patients by the end of next year or in early 2024.

Grey Bruce Health Services vice-president and chief financial officer John Kurvink was at Grey County council on Thursday where he provided an update on the building currently under construction at the south end of Markdale, adjacent to the county’s Grey Gables long-term care home.

“It is coming along really nice,” he said. “It is quite exciting to walk through it every month.”

Kurvink provided council with a number of photos of the construction progress as well as artists’ renderings of the new building, which includes wood and beam features in the entryway as well as natural light pouring in through numerous windows.

“It is going to be incredible relative to the hospital they have been dealing with,” said Kurvink. “We have wanted to rebuild that for 20 or 30 years. This has been an ongoing project.”

The $69 million facility is being funded 90 per cent from the Ontario government and 10 per cent from the community. The local community is responsible for 100 per cent of the cost of furniture, fixtures and equipment at the hospital. Millions of dollars have been raised locally over the years for the project, with fundraising ongoing. Grey County has donated $1 million to the project, including about $220,000 worth of land.

Earlier this year it was announced that the new hospital would have seven in-patient beds, up from the four that had been originally approved.

Construction of the new 68,000-square-foot hospital began in March 2021, and will replace the current Centre Grey hospital, which opened in 1958 and is close to 37,000 square feet.

Kurvink said the completed work on the new build includes curbs, paving and sidewalks outside, the lower level steel studs, conduit and duct work, all roofing and window frames. Siding is to start shortly.

Along with the seven in-patient beds, the new hospital will include a 24/7 emergency room, three exam rooms and a treatment room, palliative care room, physiotherapy, and a room for procedures such as endoscopy and colonoscopy. It will include diagnostic imaging, ambulatory care, a laboratory, a café, spiritual care and an office for the Centre Grey Hospital Foundation. There is also undesignated flex space on the ground floor for future expansion.

Kurvink said there is already planning underway to put a CT scanner in the additional space. He said the plan is to eventually have CT scanners at most of their hospitals.

Once the move to the new hospital occurs, Kurvink said they will then decide what to do with the old building.

He said an expression of interest will be put out to the community, while staff will also be consulted for ideas on possible uses.

“We will see what happens with the old hospital,” Kurvink said. “It is still a nice location downtown.”

Kurvink said they intend to continue to keep the community updated on the project as it progresses, with plans to attend county council again. They are also working with the Centre Grey foundation to inform the community and post information on their website at www.gbhs.on.ca. Questions can also be e-mailed to markdalequestions@gbhs.on.ca

Grey County is undertaking negotiations with landowners in West Grey to purchase land for a roundabout at the intersection of Grey roads 3 and 4 between Hanover and Durham.

During committee of the whole on Thursday, council held a closed session to discuss the purchase of land for the project. The project requires a small acquisition of land from three properties, but to date staff have been unsuccessful in negotiating a purchase price for the required land.

Following the closed session, staff was directed to continue to negotiate a “fair purchase” of the necessary property. If an agreement cannot be reached, staff have been directed to move forward with expropriation proceedings.

The project is tentatively scheduled for construction next summer.

Grey County has received funding through the Ontario government’s Investing in Canada Infrastructure Program Rural and Northern Communities Funding Stream. The federal government will pay 50 per cent of the project, the provincial government 33.33 per cent, with the county covering the remainder. A overall budget estimate for the project was not immediately available on Tuesday.