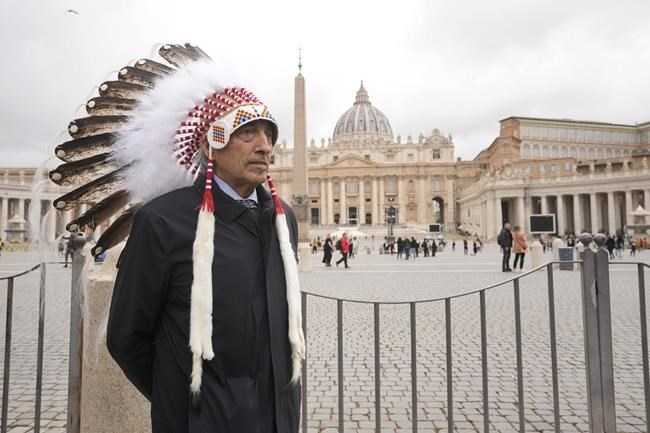 ROME — Phil Fontaine says he had hoped a long-sought apology would finally come this week when an Indigenous delegation met with Pope Francis at the Vatican.

ROME — Phil Fontaine says he had hoped a long-sought apology would finally come this week when an Indigenous delegation met with Pope Francis at the Vatican.

But the former national chief says he was still shocked Friday when he heard the pontiff say: “I am very sorry.”

“This moment, I think, reflects … the determination and courage of many that kept up the fight over the years,” Fontaine said in St. Peter’s Square.

Thirteen years ago, Fontaine walked through the halls of the Vatican with four other Indigenous delegates to meet Benedict, who was then the pope, and request an apology for the Roman Catholic Church’s role in residential schools.

Fontaine says it was just one step on a long journey and they “had to put pressure every step of the way” for an apology.

An estimated 150,000 Indigenous children were forced to attend residential schools. More than 60 per cent of the schools were run by the Catholic Church.

For a long time, the abuse inside the schools was kept quiet nationally. Fontaine broke the silence in 1990 when he spoke about his own experiences as a child at the Fort Alexander Residential School in Manitoba.

Two decades later, Fontaine would hear an apology from then-prime minister Stephen Harper — a requirement of the Indian Residential School Agreement. The same words did not come from the church when Fontaine made his first papal visit the following year.

Fontaine said a lot has changed since then. The Truth and Reconciliation Commission of Canada released an extensive report detailing the abuse at the schools and Canada also stopped its opposition to the United Nations Declaration on the Rights of Indigenous Peoples.

It wasn’t just the church that needed to be convinced, Fontaine said, as Canadians were not invested until the discovery of potential unmarked graves at the site of a former residential school in Kamloops, B.C.

“It shocked the country and it became an international story,” Fontaine said.

At that point, Fontaine said, the world was watching what the church was going to do. He let his hope grow.

The day finally came this week. While Fontaine sat nearby, Pope Francis asked for God’s forgiveness for the deplorable conduct of members of the Catholic Church.

“I want to say to you with all my heart: I am very sorry,” Francis said in Italian, during a final meeting with First Nations, Inuit and Métis delegates.

The words felt powerful, Fontaine said. But he added there is much to be done, including working with the Canadian Conference of Catholic Bishops to make sure the apology is said again on the land where the residential schools were run.

But for the time being, Fontaine said he will feel immense satisfaction.

“It was a passion of mine for such a long time and we finally achieved the success that we were hoping for,” he said.

“There were many, many people that were part of this journey, so I’m feeling pretty good.”

This report by The Canadian Press was first published April 1, 2022.